Cycling can have a positive impact on your health, and fitness has less damage to your body (for example, it doesn’t damage your knee as much as running).

According to a data statistics, postmen generally lived a long life in the last century, which is inseparable from their cycling to deliver newspapers.

And people of all ages can enjoy the sport.

Benefits of cycling: heart: cycling is a cardiovascular activity, so it can make your heart stronger and healthier.

According to the report of the British Medical Association, riding a bicycle only 20 miles (32 kilometers) a week reduces your risk of heart disease such as coronary heart disease by half compared with sedentary.

Sleep: cycling regularly can also promote high-quality sleep (of course, it varies from person to person).

Mood: when you see people riding bicycles, they seem to be happier than other people who may drive.

There is no doubt that cycling can be refreshing.

(sometimes when you see good weather, you want to go out by bike.) you rarely see people finish cycling in a bad temper.

Lose weight and keep fit: if you are not fat, regular cycling will make your body more symmetrical.

If you are fat, regular cycling can make you lose weight.

British research shows that cycling for half an hour a day can burn nearly 5 kilograms of fat a year.

Brain: a UCLA study found that older people 65 to 69 of the most active (by walking, swimming, and cycling) had more than 5% more gray matter than those who were inactive.

Gray matter, the cerebral cortex, processes most of the information we use, and its contraction can lead to Alzheimer’s disease.

You can become healthy without too much effort (as long as you love cycling).

A study from a credible source in 2017 showed that people who ride regularly or integrate cycling into sports activities are generally healthier than those who engage in other sports activities.

According to the data of the National Forum of the American coronary heart disease foundation, the health level of people who often ride bicycles is equivalent to those who are 10 years younger.

How long do you ride every day? As mentioned above, you don’t have to work too hard and spend 30 minutes riding every day, which is enough to keep healthy and improve your health.

Said so much: the most important thing is interest! Interest is the biggest driving force.

Press to identify the QR code.. 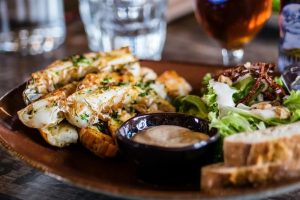 “9-character” eating principle before and after riding

Do you want to ride fast! Take a look at the following cases!