These niche sports, which were rarely heard of a year ago, suddenly became popular in the summer of 2022, and for a time became a representative of the trend of “new City Sports”.

The “protagonists” in this wave of trend movement are not only young people, but also a large number of middle-aged people.

In the evening, on the square near the bird’s nest in Beijing, Lu Chong players writhed on the board and enjoyed the pleasure of rubbing the ground.

If young people are willing to try new sports, what is the charm of these emerging urban sports that can make middle-aged people willing to get up from the sofa? Are they the products of the epidemic, or will they accompany people’s lives for a long time like running? Perhaps one or two can be seen from the process of breaking the circle.

1 where is the “new” of the emerging city movement? In the past year, the epidemic has changed many people’s work and life style, but people’s demand for exercise has always been, and even a “blowout” has occurred.

Just like a group of “Liu Zhenhong girls” with fire during home office; Cycling and commuting have become a sight of the city.

Among many emerging sports, Frisbee is undoubtedly the hottest this summer.

Jump and deliver, and the frisbee draws a parabola in the air; Running, swooping, and the people in the field run to pick up the plate…

Frisbee is becoming a popular sport in the city and a new favorite of young people.

As more and more people try out because of curiosity, while frisbee is popular in social circles, it even competes with football for the venue.

According to the 2022 youth trendy sports report, Frisbee has surpassed skateboarding and cycling to become the most popular trendy sport among young people.

In addition, according to the statistics of the national Frisbee Promotion Committee, there were about 500000 players participating in Frisbee in China in 2021.

Lu Chong is the rising star of this year among the skateboarding echelons ranking second.

Different from the traditional double rocker, players do not need to pedal repeatedly.

As long as they press the center of gravity of their body and swing their body, they can keep the land impact board in a sliding state, simulating the feeling of surfing on the sea.

Surprisingly, Lu Chong is not only the “middle-aged version of twist music”, but also has a higher proportion of female players than men.

This cool Street sport can not only reduce people’s beer belly to middle age, but also make hot mothers chase the wind while walking their babies.

After “not letting go” of any lawn in the city, some rivers in the city are also favored by players.

This summer, some people did not choose to hide in the air-conditioned room for the summer.

They stepped on paddles and played “rafting” on the river.

Whether it’s simply lying on the board, standing and sitting, or dating a friend “bucket board” or jumping into the water for swimming, they have become a new way to open this summer.

tricks can almost meet the needs of different outdoor sports, and also allow people to see and feel their city from a new perspective.

These sports can also be arranged and combined to open the “camping +” mode.

At the weekend, about 35 friends rode to the riverside grassland in the suburbs for camping.

First, there was a Frisbee game on the grassland.

At noon, they went to the river to play paddles.

In the evening, they ate barbecue and watched the stars.

Sports, leisure and social networking were done at one time.

The introduction is simple, both men and women can, without professional competitive training, and whether to win the first is no longer the main purpose.

Such a “sports manual” is enough to make people eager to try.

The participants will undoubtedly enjoy the fun of sports if they play easily.

As one player said, “the pressure is big enough at ordinary times.

Lu Chong can relax himself without thinking about how to challenge himself every day.” This is the charm of these new sports.

▲ there is a tidal Lane on the exclusive bicycle road, which can be used in the morning and evening peak hours.

Photo / photo by wangguibin, a reporter from the Beijing News.

2 the camping economy has driven the market to nearly 400 billion yuan.

Although the new city movement is simple and easy to learn, the “threshold” to enter the circle is not low.

For example, the price of Frisbee is close to the people, but the venue fee is not cheap.

As for paddles and riding, you have to spend money to “burn equipment” first.

For example, the price of a single paddle ranges from 800 yuan to thousands of yuan.

With the addition of paddles, foot ropes, life jackets, inflatable pumps and other accessories, the average price of a set is about 2000-4000 yuan.

If you use the equipment provided by the club, take Beijing as an example, the price of a 3-hour coaching class is about 500 yuan.

Riding a shared bike, I’m afraid I can’t catch up with my friends’ faster and lighter variable-speed road bikes and mountain bikes.

However, even if the equipment is expensive, the market is still in short supply.

It can be said that these sports “play” with new vitality of consumption growth.

According to the Beijing News shell finance report, before 2020, the monthly retail volume of a bicycle store in Beijing was about 100.

In May this year, the retail volume rose to about 300, also maintaining a 30% increase compared with the same period in 2021.

Even for the best-selling and largest supply of urban commuter cars, customers can’t pick up their orders until 2023 at the earliest, and some special models of niche kits even wait until 2024.

One year ago, an enterprise producing skateboards in Zhejiang was mainly OEM, and more than 90% of its business was export.

This year, three new production lines were added, with an average daily output of about 5000 pieces, and private brands were launched, increasing domestic business volume by 20%.

The related outdoor camping industry has also ushered in explosive growth, so 2022 is called the “first year of camping economy”.

According to the statistics of AI media consulting, the core market size of China’s camping economy reached 74.75 billion yuan in 2021, driving the market size to 381.23 billion yuan, with a year-on-year growth rate of 58.5%.. 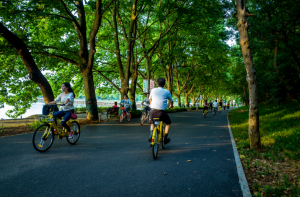 Cycling, a deep interaction between people and the city