The bicycles in the gods play are all imported goods, but China’s bicycles are really COVID-19.

During the period, many industries have been hit hard by the fact that they have to take control measures.

But some industries are growing against the trend.

What industry? You may think of medicine, but there is another thing you may not think of – bicycles.

According to the big data of meituan, after the resumption of production and work in Shenzhen, the use of meituan bicycles increased by 49% and the riding distance increased by 60% — naturally, meituan has a “panoramic skylight”, which is absolutely well ventilated and can avoid close contact with each other, so it has become the preferred communication tool for more people.

▲ there are more and more brands and numbers of shared bicycles.

▲ in addition to the shared bicycles all over the street, “private bicycles” are also used more and more, “if it wasn’t for the epidemic, I would forget the bicycles eating ash in the corner”.

This principle is applicable all over the world, so choosing to ride more is still a worldwide phenomenon.

When the world has more demand for bicycles, China’s bicycle industry will increase production accordingly.

Moreover, cycling has a certain degree of fitness effect.

For example, no matter whether there is an epidemic or not, I always insist on cycling.

I will ride within 20 kilometers as long as the weather permits.

▲ raise your hand if you have such memories? In fact, this situation can be regarded as a “retro” way of travel for Chinese people, because our last two or three generations grew up with bicycles.

Bicycles, workers riding to work, police patrolling, a car carrying a family, a wife in the back seat, children sitting on the front bar, crisp car bells, additional side fights…

These are the childhood memories of many people – who has a “phoenix”, “forever” and “Flying Pigeon”, which is almost equivalent to owning Mercedes Benz and BMW today, launching a watch to flirt with younger girls, which is worthy of charm.

Bicycle was once the most mainstream means of transportation for Chinese people, and China is a real bicycle power.

At the beginning of reform and opening up, foreigners who came to China were shocked by China’s large-scale blue and gray “cyclists”.

But this very Chinese object is an imported one.

It is now recognized that Da Vinci had the earliest idea of bicycle in the 15th century, and the practical bicycle originated in France and Germany.

In 1790, the Earl of France siflak invented the original bicycle of “bench and two wheels”, which can support the weight.

It can only move forward in a straight line by pedaling on the ground with two legs.

In 1817, a forest ranger named karvon Drais in the Duchy of Baden, Germany, invented the turning handle, from which bicycles can turn.

Why did the Ranger have this invention? Because he needed to go a long way, but he was poor and had no money to buy horses, so he had to ride this primitive car (on the other hand, because of the climate, a large number of horses died).

He couldn’t turn the corner.

He was too angry, so he invented the “turning handle”.

▲ evolution of bicycle ▲ in 1840, Scottish blacksmith Macmillan invented the pedal and connecting rod, which realized the riding with both feet off the ground.

In the late 19th century, the British Rosen designed the structure of chain and gear, and the Irish veterinarian Dunlop invented the pneumatic tire.

Later, various improvements such as cushions and spokes continued to pile up, and the bicycle finally evolved into what it is today.

But the word “bicycle” is made in China.

If translated freely according to the languages of European countries, bicycle should be called “two wheeled vehicle”, “running machine”, “pedal fast machine” and so on, and “bicycle”, a Chinese word, originated from the book “illustration of newly made instruments” written by Wang Zheng, a scholar of the Ming Dynasty.

This 52 year old scientist of the Ming Dynasty, who was just a scholar, had a lot of contacts with Western missionaries such as Matteo Ricci and Tang ruowang.

He was familiar with Western science and technology and machinery.

Inspired, he conceived a four-wheel car that can carry people and goods and save labor.

It was named “bicycle”, but it was not put into production.

This is one of his many ideas of trying to “save Daming through science and technology” when the world is in chaos.

Unfortunately, he still failed to save Daming, but died with it – in October of the 16th year of Chongzhen, Li Zicheng captured Xi’an, Wang Zheng refused to work, and died on a hunger strike for seven days.

It will take more than 200 years for bicycles to really come to China.

After the second Opium War, the Qing government was forced to open up limited, set up the prime minister’s Yamen and tongwenguan, sent envoys to the west, and began to deal with foreigners to explore the reality of European countries.

In 1866, the prime minister’s Yamen sent an official of the interior government, bin Chun, to visit Europe with six people, including his son Guangying, Tongwen students Fengyi, Zhang Deyi and Yan Hui.

This was the first official delegation in modern China.

▲ Zhang Deyi has served as an envoy for eight times.

It can be said that he is the earliest “tourism blogger” in China.

They saw the “two wheeled vehicle” for the first time in Paris, which is quite novel.

“There are only two wheels for tourists on the street.

They pass through the short axis.

People sit on the axis, step on the mechanism, and the wheel rotates to be a vehicle.

There is another wheel passing through the axis, and their feet cross the end of the axis, step on the machine, and gallop on the galloping horse.” Two years later, Zhang Deyi went on mission again and saw the British “two wheeled vehicle” in London.

“The front and back of the bicycle are one wheel, one big and one small, the big one is two inches, the small one is half an inch, and one person sits on it.

He rotates on the string, moves his head with his feet, and his hands press the shaft and push forward and drag back, looking left and right, which is very interesting.” At this time, the word “bicycle” appeared again..

Senior high school students have been questioned and reported about the award of making unmanned bicycles, the latest progress 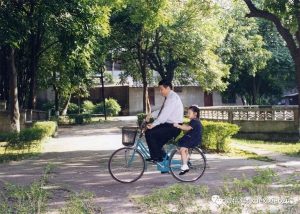