I waited for a long time until the sun was shining, but the colorful dew slowly disappeared, like a person holding back tears without saying a word, The presbyopia glasses gradually fade away in the crowd.

The action of repeatedly removing and putting on presbyopia glasses is very similar to that of repeatedly wiping the tears from the corners of my eyes.

In this life, there are always too many things for me to recall and cherish.

As soon as I mention them, I want tears to flow into a river, and those wiped tears only leave some vague tears, like a river, which flows and disappears on the earth, Too many rivers have worked so hard that they finally didn’t reach the sea.

My pond is still clear.

I often use fish and shrimp as an excuse.

I still owe a cry to my hometown.

My father and son were crouching in the wheat field smoking and touching the wheat seedlings when I left home that year.

I shouted, my Lord, When I left, I seemed to hear my father’s hum.

Now I’m kneeling at the same height as my father in those days.

The wheat field in those days is now full of ginkgo trees.

I stretch out my hand to touch the weeds in the cemetery to simulate my father’s wheat seedlings.

Sometimes learning an action will exhaust another person.

I’ve been waiting for the intersection all my life.

If I like the intersection, I have to accommodate its uncertainty.

It extends in all directions.

Its joy and tears are forced by its bitterness yesterday, A woman looked at the intersection again, and she didn’t know whether to say goodbye or wait.

Obviously, she was just a young mother, so she only stood for a while and then turned around and walked towards the interior of the village.

The wall had an accident.

The sharp edge of the iron sheet cut the tendon of my right little finger.

Later, the little finger slowly bent and stiffened, as if it were a hook on her body, which was very good, It’s convenient for me to hang the takeout food that suddenly comes out of my life.

Those hot or cold takeout food are often hung on the hook, making me look more like a walking wall to catch up with orders? In fact, many times, life is as flat as a wooden board.

The rider is a sharp nail.

Only by straightening his waist can he nail the corners of life.

Every bent nail will be discarded or subjected to more violent percussion.

Life is a kind of furniture.

Everything, It takes a lot of neat nails to push people at midnight.

If it weren’t for this touch of blue in the midnight street, I almost believed the lie that night is either black or white.

His posture of bending over the cart is more like a stubborn tree indomitable in the wind.

The deflated tires and the heat of his neck make him look like a overtime order.

The temperature is still falling and the fallen leaves are still dead after the rain.

Too much before landing The fallen leaves are far away from the woods.

The appearance of a take away rider on the street at midnight makes the sky shine, The moon is a loophole in the sky, so the night is never dark enough.

She cries alone in the center of the stage.

So many people play instruments behind the scenes to match her crying with harmony, pushing her pain to a climax.

The cloth separates her from them.

Before and after the separation, it’s very strange.

I asked my mother when she was young, she didn’t answer except to cry with the protagonist.

Then, Whenever someone cries, I hate those who accompany behind the scenes.

I want to rush over and open the curtain so that people can see their intoxication.

Someone crawls forward in the crop field, flapping his wings like a bird in a wave.

This is an illusion caused by my distant view.

Many times, waves hunt and kill people who fall into the water in bursts, and vigorously cry for help but make no sound.

My father also knelt in the field.

He folded his body down to let himself Shorter as crops broken by the wind, I have been unable to guess how much pain those crops that have been broken will bear if they sprout again from the scars.

It’s also like my father who clenches his teeth and frowns every time he gets up and locks the soil and water in his life.

My wife is afraid to say what she’s afraid of.

It’s too light, and the wind blows away, or write a letter, Black and white words are like nails.

After decades, she took out her mind again and let the pen tip run on horizontal lines, as if she stood on tiptoe and ran on the road again.

The wind of years came to her ears too fast! When I think about it like this, my life really slows down.

It slows down into gently falling white hair.

It slows down into exhortations word by word.

I recite a poem to my mother.

Because it’s written by me, my mother thinks it’s the best word.

Because it’s read by me, my mother thinks it’s the best sound.

My mother doesn’t know that I read all the mothers in the poem as mothers.

Illiterate mothers believe that mothers are the world The best title and the motherland is the best place in the world.

My mother is actually so thin.

Those once familiar and beautiful curves only leave some years of creases.

I have never observed so quietly that my sleeping mother is so strange.

I never thought my mother would be like the title page of a book, which has been ignored by me in my long-term reading habits.

I’m stupid Clumsily loving the old sofa sent by the world’s neighbors made my wife happy.

She was dancing and planning to match the sofa with a proper tea table.

At the same time, she padded a broken sofa leg with books one by one.

I was in the bathroom, I washed my face with clean water and replaced it with a brand-new smile.

I’ve been sweating and squeezing out the water of life with my physical strength all the time, but I still can’t make life more pure.

I’ve clumsily loved the world and the people who love me for nearly 30 years.

I’m not ready for tears in front of my lover.

The pictures are from CCTV news and Chen Chaohua’s microblog.. 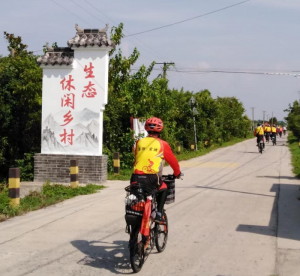 Ride in the beautiful countryside of Xinzhu, Shuiyang town 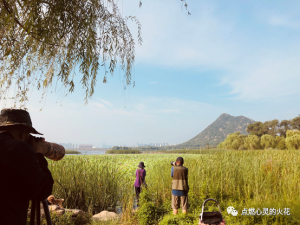 The sixth day of riding in Jinan: This Huashan Mountain