Will strong convective thunderstorm weather come again? Will it rain these two days? For details, click to view: “cool down 4-5 ℃! Strong wind 7-8! Cold air attack” at about 23 p.m.

Li rode his bike with his wife, Ms.

Li and his wife being hit by a rear vehicle, and then, The accident squadron of Longgang traffic police brigade received a report that a small car collided with a bicycle at jiulixiang bus station on Pingxi middle road.

After the story was told, the driver of the small car abandoned the car and fled on the spot ▼▲ the accident squadron of Longgang brigade informed the man of the collision and escape accident, resulting in two serious injuries.

The police immediately set up a task force to monitor the picture, which showed that around 11 o’clock that night, Mr.

Li rode with his wife on Pingxi middle road.

They rode against the roadside and did not reach the middle of the road, and the night lighting of the incident section was also good.

At this time, a car in the rear suddenly came quickly and directly hit Mr.

Li and his wife.

They were hit and flew with their car.

The car then braked and stopped, and the driver escaped on the spot.

According to the on-site investigation of the traffic police, the accident caused damage to two vehicles.

The injured was rushed to hospital for emergency treatment.

He was sent to the comprehensive ICU after multidisciplinary consultation.

After receiving the alarm, the accident squadron of Longgang brigade attached great importance to it and immediately organized the police to investigate the case.

By querying the registration information of the car, we successfully contacted the owner.

The owner said that he was in Hunan at the time of the incident, and the vehicle should be driven by his son.

Subsequently, the police obtained the contact information of the owner’s son, but the phone has been unanswered.

After the big data query of the public security network, the police rushed to the owner’s son’s residence and found that the suspect had just left his residence and the mobile phone had been turned off.

The police tracked the suspect’s track of action by transferring surveillance.

At the same time, contact the relatives of the suspect and their relevant friends for many times to clarify the interests and let them persuade the suspect to surrender as soon as possible.

The case of the suspect’s surrender is under further investigation.

On April 11, the police finally dialed the suspect Zhang.

On the phone, Zhang confessed to his hit and run behavior.

At the same time, his family and friends told him through wechat that his traffic police department had been looking for him.

Finally, the suspect surrendered to the accident squadron of Longgang brigade.

▲ Deputy squadron leader he Xiaoxiao made a written record of questioning the suspect Zhang mouming.

After Zhang arrived at the case, the police immediately interrogated him and took Zhang back to the scene of the accident for identification.

At present, the injured Li and Lu are still in hospital, and the case is also under further investigation.

Make an appointment! This weekend, ride together to see the beautiful scenery of spring in Ningbo 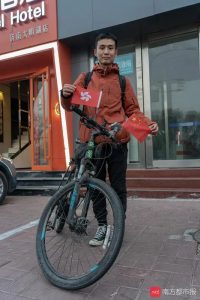