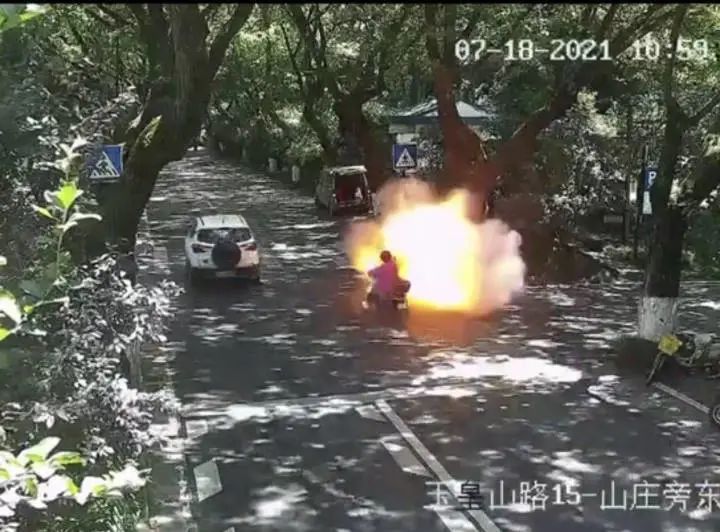 If there is any infringement, please contact in time.

A father and daughter on the electric car were severely burned and are being treated in the hospital.

In the video, the father and daughter’s electric bicycles suddenly catch fire while driving.

Subsequently, security guards, passers-by and car owners passing by the nearby sanatorium rushed to help.

The first person who rushed to the scene to save people was Tian Long from the Security Department of Yuhuang villa, from Lu’an, Anhui Province.

According to master Tian’s description, he just finished lunch and returned to the gate post.

Just a minute later, he heard a sound “boom!”.

Less than 30 meters away from the sentry box, a man was on fire and rolled on the ground to save himself.

He shouted “help me!” A battery car on the road caught fire.

The fire was fierce.

There was also a girl whose clothes were almost burned away.

“I remembered that there was a fire extinguisher in the sentry box, so I hurried to get it and sprayed it at the scene of the fire.” At 13:30 noon, the Hangzhou fire department sent a briefing: at about 11:00 on July 18, the Hangzhou Fire detachment received an alarm: a battery car on No.

After receiving the alarm, the detachment immediately dispatched 3 fire engines in Hubin station, with a total of 15 people rushed to the scene to put out the fire.

At about 11:10, Hubin station arrived at the scene.

When arriving at the scene, the battery car fire had been put out, and the three wounded had been sent to the hospital.

The Hubin fire station immediately cooperated with the evacuation and warning work.

At about 11:30, Hubin station handed over the scene to the public security traffic police department and returned.

At present, the cause of the fire is under further investigation and verification.

The vehicle shall be charged in a special parking shed.

The charging time shall be in accordance with the provisions of the manual, and shall not exceed 10 hours in principle.

In order to pursue power and riding time, car owners replace the battery at will and change the circuit privately.

From the root, they bury a “time bomb”.

If they charge carelessly, it is very easy to cause a fire.

Electric bicycles should be checked and maintained frequently, and professional maintenance institutions or personnel should be selected when electric bicycles need to be repaired due to faults; Do not disassemble the electrical protection device without authorization to ensure that the electrical circuit and protection device are intact and effective.

One pair of giante casual shoes is better than two pairs