Located on the Qinghai Tibet Plateau and the third pole of the world, Qinghai has never lacked innovative actions.

The lake race, which was born 20 years ago, is an international road cycling race with the largest scale, the largest number of participating teams and the highest prize in China, and has written its glory in Sanjiang.

20 years of youth, we have witnessed the glory and greatness of the lake race.

With the theme of “green humanistic harmonious experience”, it has left many touching “Qinghai stories” in international road cycling events.

Standing at a new historical starting point, Qinghai has made another unprecedented decision: to create a national park demonstration province.

We have reason to believe that it is not a dream for the athletes of the lake race to ride in the National Park province and enjoy the great beauty of Qinghai in the future, and it is becoming a reality step by step.

It can be said that Qinghai Lake is the place where the dream of the lake race began.

This international road cycling race, named after “the most beautiful lake in China”, has been cycling in the area around the Lake since the first session.

The two complement each other and jointly promote the common development of ecological environmental protection in Qinghai.

The race around the lake takes “green, humanities, harmony and experience” as the theme, among which “green” is to fully display the unique ecological value of Qinghai Lake and carry forward the concept of ecological civilization.

Qinghai Lake, with the reputation of “the most beautiful lake in China”, is the trump card scenic spot in Qinghai Province.

For Qinghai, Qinghai Lake also has an important mission.

It occupies a very important position in the construction of Qinghai’s huge ecosystem.

It can be said that Qinghai Lake is the “barometer” of Qinghai ecology and a natural barrier to prevent the eastward spread of desertification in the West.

Therefore, during the round the lake race, ecology undoubtedly received great social attention.

What changes have taken place in the ecological environment of Qinghai Lake? The comments of cyclists, media reporters from outside the province and tourists are proof.

“The beauty of Qinghai Lake is amazing.

What people didn’t expect is that there are almost no garbage such as plastic bags and peels beside Qinghai Lake.” Qinghai Lake is indeed beautiful, but what’s more touching is that the herdsmen living around protect Qinghai lake like protecting their eyes.

“There are more and more naked carp resources in Qinghai Lake!” Many athletes and media reporters participating in the lake race have this experience.

They believe that the reason why Qinghai Lake is beautiful is precisely because of its purity and nature.

Cycling has no pollution and is close to nature.

It is an environment-friendly sport.

At the beginning, based on this, the Qinghai Lake International Road Cycling Race was held.

In accordance with the requirements of the National Park creation specifications, our province strives to complete the establishment of Qinghai Lake National Park in 2024.

The person in charge of the Organizing Committee of the Lake Race said that as a sports event, the role of the lake race in the environmental protection of Qinghai Lake is certainly limited, but it is undoubtedly beneficial to enhance people’s understanding of protecting the ecological environment of Qinghai Lake.

The race around the lake has drawn the world’s attention to Qinghai Lake, enabling people to understand the importance of Qinghai Lake and its ecology, which is also a kind of publicity and popularization of environmental protection awareness to a certain extent.

Qinghai Lake National Park has entered the stage of establishment and implementation.

We are looking forward to the day when cyclists from all over the world will ride in Qinghai Lake National Park.

（2） “Qinghai is green, the Yellow River is yellow, the snow is bright, the mountains are green, and there are good pastures at the foot of Qilian Mountain.

There are groups of horses, tens of thousands of cattle and sheep here.

The horses are fat, the cattle are strong, and the sheep’s hair is as bright as snowflakes…” in the mountains, a folk song sang the magnificent scenery hidden in Qilian Mountain.

But before the 2010 round the lake race to Qilian, the beautiful scenery of Qilian was hidden in the boudoir and little known.

After the lake race came to the Qilian Mountains, this magical land of Qilian was known by more people in the world, which played a role in promoting the tourism, culture and economic development of Qilian.

Qilian Mountain is one of the key ecological functional areas in China.

It is responsible for maintaining the ecological balance of the Qinghai Tibet Plateau, preventing the southward invasion of the three deserts of Tengger, Badain Jaran and Kumtag, and ensuring the runoff supply of the Yellow River and inland rivers in the west of the river.

It has a very important strategic position in the national ecological construction.

Due to the existence of Qilian Mountain, the arid desert zone in Northwest China presents a green island landscape, which breeds natural ecosystems such as forests, grasslands, deserts and wetlands, and provides a habitat for rare and endangered animals such as snow leopards, white lipped deer, musk deer and black necked cranes.

It is a representative of the composite ecosystem of cold temperate mountain coniferous forests, temperate desert grasslands and alpine meadows with important ecological significance.

In the boundless, Qilian Mountain reveals the wild beauty of nature.

Qilian Mountain breeds a large area of wilderness, above which is a paradise for life.. 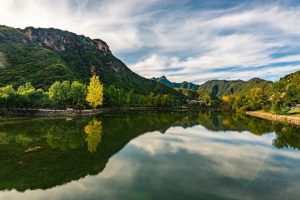 Picturesque scenery, but also cycling, this place is too suitable for children!