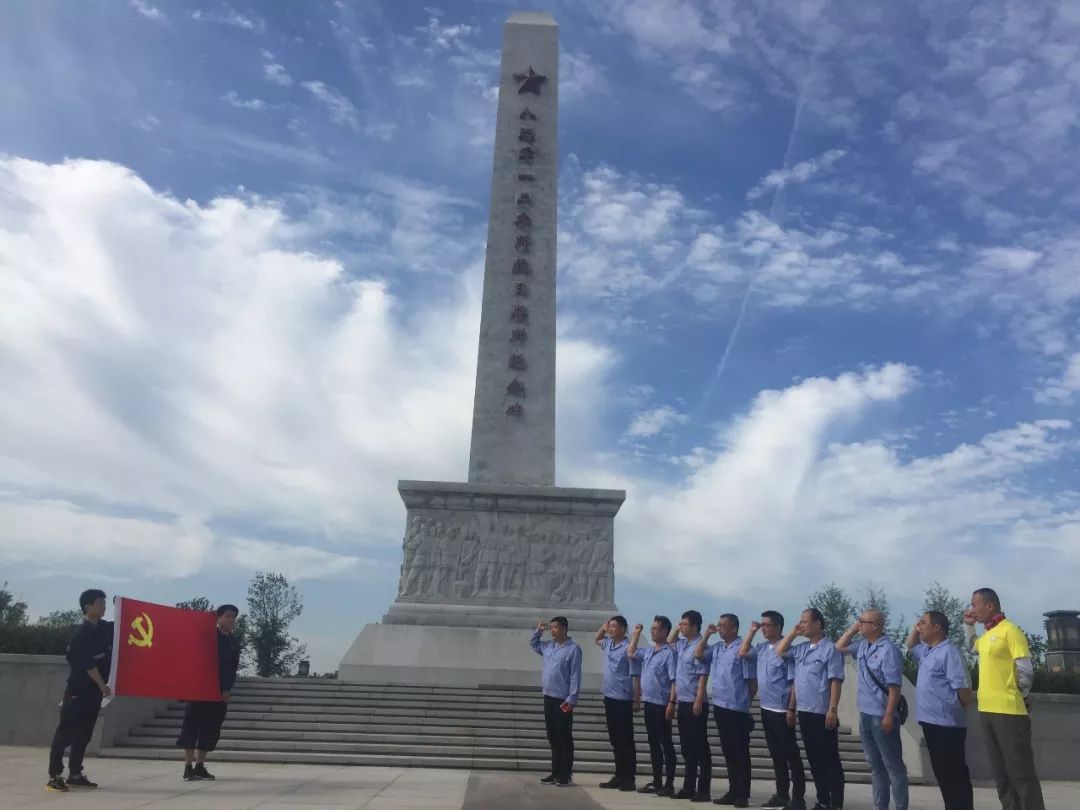 On June 30, the Party branch of coking workshop 1 carried out a party day activity with the theme of “riding in the great beauty village to feel the red education”. 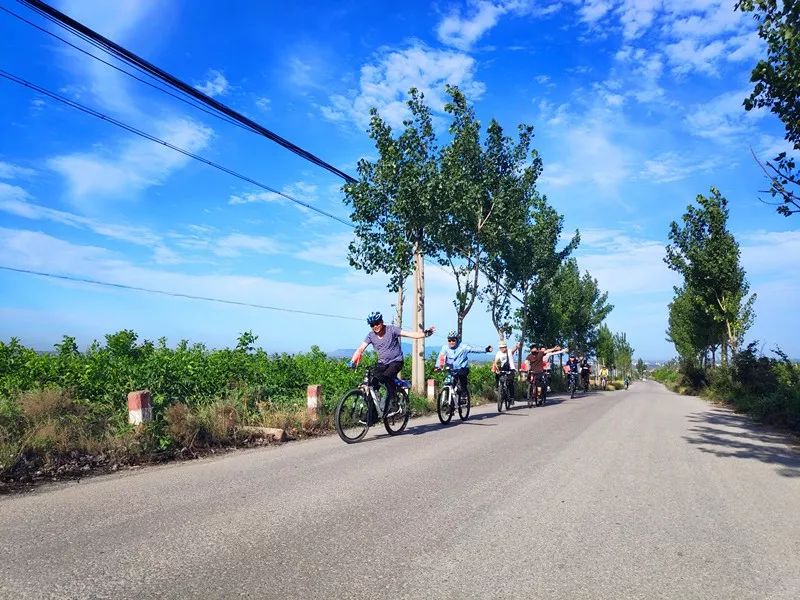 Grassroots party members and cadres, activists for joining the party, and representatives of young workers in the workshop rode to the Anti Japanese oath memorial of the 120th division of the Eighth Route Army in the Zhuangli experimental area of Fuping County to visit and study, cherish the memory of the revolutionary martyrs, inherit the red gene, and accept the training of party spirit and the baptism of the red spirit with practical actions. 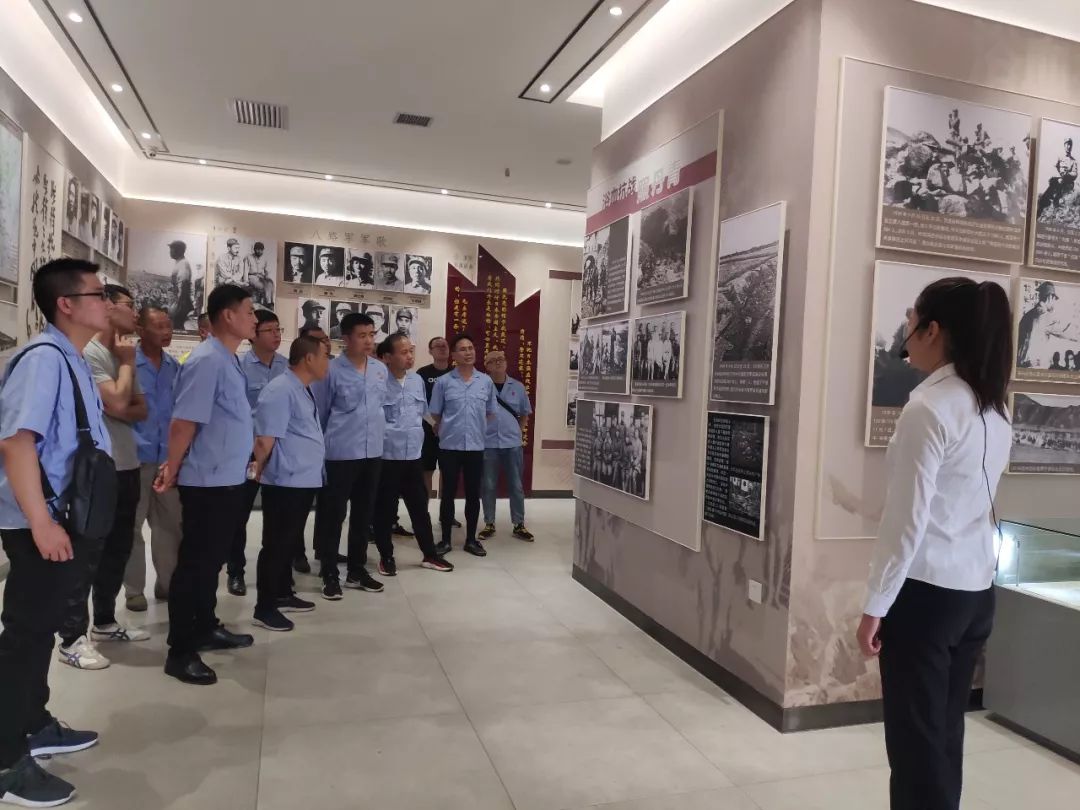 When the first ray of sunshine in summer slowly rose, the workshop cycling team was ready to start from the company’s office building, passing through meijiaping station to the southwest of Yong’an village.

Along the way, everyone rode the summer wind, bathed in the scorching sun, chasing each other, and laughter echoed on the quiet path.

While cycling and fitness, everyone not only appreciated the infinite natural scenery of nature, but also personally experienced the great changes in the countryside brought about by reform and opening up.

Riding to the intersection of Yong’an village, everyone stopped and came to the Anti Japanese oath memorial of the 120th division of the Eighth Route Army along the straight Kangzhuang Avenue.

In the center of the red education base, there stands a monument made of granite, with a height of 19.37 meters and a pedestal and platform of 9.2 meters.

That is the monument to the Anti Japanese oath of the 120th division of the Eighth Route Army.

It means the day of the oath of resistance against Japan on September 2, 1937, and it also shows the determination of the whole army and people to fight to the death.

In front of the monument, song yuepeng, Secretary of the Party branch of the workshop, led everyone to review the oath of joining the party.

All Party members clenched their fists and were as bright as a torch.

Under the red party flag, they solemnly took the oath.

The sonorous and powerful voice was heard, and the heavy beating was in the hearts of every Party member.

Subsequently, Party members and cadres came to the revolutionary deeds exhibition hall to visit and study.

The commentator of the exhibition hall gave a clear understanding of the whole process of the 120th division of the Eighth Route Army’s anti-Japanese struggle through the five parts of the explanations of the Red Army’s entry into Fuping, the deep love between the army and the people, the Anti-Japanese oath in Zhuangli Town, the bloody battle and the exploits of the liberation of the northwest.

On August 25, 1937, it was reorganized in Fuping by the 27th and 28th corps of the second front army of the Chinese workers’ and peasants’ Red Army, the independent 1st and 2nd divisions, the Chishui guard battalion, and the first division of the former general headquarters.

On September 2 of the same year, the 120th division held an anti Japanese oath meeting in Zhuangli town.

All the officers and men solemnly swore: “do not drive Japanese robbers out of China, do not completely eliminate the traitors, and swear not to return home!” After eight years of bloody struggle, the Chinese people finally defeated the Japanese invaders, creating a case by case of the epic war of resistance.

“Monument to the Anti Japanese war dead” was written by Mr.

Through the words on the monument, the bloody scenes of the past seem to be vividly remembered, which makes people feel and cherish today’s hard-earned happy life.

After visiting the monument to the martyrs’ deaths, everyone bowed three times to the monument solemnly and paid tribute to the revolutionary ancestors.

“As a young generation, we are really moved and shocked by the heroic deeds of our ancestors who did not hesitate to sacrifice their lives for the cause of the revolution.

At the same time, we have personally felt the great spirit of our revolutionary ancestors who worked hard for the cause of the party and the people.

Living in a peaceful and beautiful era, we should be lucky and cherish it.

We must learn from our revolutionary ancestors, never forget our original intentions, work hard and strive for the beauty of Shaanxi and Jiaotong As a league member, as the reserve force and successor of the Communist Party of China, I must remember the history, remember the mission, love my post and work hard, practice the promise of a league member with my words and deeds, and hope to become a glorious Communist Party member as soon as possible.

“Gu hang and Ren Guohui, young employees of the workshop in front of the magnificent monument, are deeply touched.

Show the progressiveness of Party members with practical actions, show a new image of Lianyi, and escort the sustainable and high-quality development of the company.

How many of the six misunderstandings of cycling did you get?