Wen / Wang Xin went to the car for maintenance early in the morning and enjoyed the warm service provided by the 4S store.

Naturally, if you are in a good mood, you don’t want to.

After a lunch break, I swept my bike and went to play basketball.

Although it is summer, it is still a good time to ride a bicycle.

I think you have found that there is another new member in Tongling’s public transport – meituan electric bicycle.

The yellow and gray car body, the reasonably designed steering handle and hanging hook, the comfortable seat and its good shock absorption system have been favored by everyone since they were launched.

Those who have experience will certainly experience that, usually, you ride it to surpass a certain goal or rush through a traffic light.

Most of them are too anxious to achieve.

This has to make you admire its safety design concept after you are upset! Riding a shared electric bike is green and environmental protection.

It is important that it can make cyclists have a rational driving attitude, and also make people think about riding a bike in the 1970s and 1980s; Moreover, with the development and changes of modern cities, there are some places that are not accessible by car.

You can enjoy the natural scenery at a glance when riding it.

The taste can only be realized when you ride in person.

The reason why shared electric bicycles are popular is that there are few subways in the third and fourth tier cities, and the transportation convenience is relatively low.

It makes up for this part of travel demand.

However, it was learned from China Newsweek yesterday that first tier cities such as Beijing, Shanghai and Guangzhou have successively introduced policies to explicitly restrict or prohibit the development of shared electric bicycles.

Among them, Beijing’s attitude is particularly firm.

Later, the development of shared electric bicycles was strictly restricted by means of clearance, punishment and supervision.

Suddenly, I have a melancholy feeling in my heart.

As a person living in the X-ray city of Tongling, I am quite dependent on electric bicycles.

Once I lose it, I may feel at a loss.

Of course, it will take a long time to reach this day.

This is not to doubt the development speed of our city, but I’m afraid this day will come sooner or later.

It is said that Qingju electric bicycle withdrew from Tongling market because it failed to win the bid.

Now only harrow and meituan electric bicycles are left on the market.

Let’s cherish and cherish them.

After all, it is still serving our city and the people in the city.

What’s more, it will also become the development mark of an era, deeply imprinted in our hearts…

Recommended reading in the past: this official account is my own…

I care how much youth is missing between mountains and rivers.. 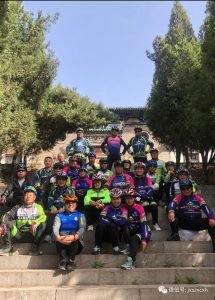