After more than two years of construction, Nujiang Meili highway, the most beautiful highway in Yunnan, is expected to be fully opened to traffic by the end of November this year.

Among them, the Fugong Lushui section will be trial opened to traffic before the national day.

Nujiang Meili highway, known as the most beautiful highway in Yunnan, is regarded as the key national and provincial trunk line reconstruction project of the Ministry of transport in the 13th five year plan, It is one of the “100 key channel projects” in the “double hundred” project of transportation poverty alleviation in Yunnan Province.

It has attracted much attention from the outside world since its construction was started in August 2017.

A slow lane is set beside the road to ride, walk and visit the beautiful Nujiang River.

The slow lane system is set on the opposite bank of class II Highway.

On the basis of riding, walking, viewing and other functions, it will be set up with a healthy environment Runway, open-air hot spring, rope skating experience and other facilities meet the needs of fitness, leisure, sightseeing and exploration.

The Fugong Lushui section has been completed and is planned to be opened to trial traffic before the National Day this year.

At present, the Fugong Lushui section has been completed and is planned to be opened to trial traffic before the National Day this year.

◆ the total length of Fugong Lushui section is 132km, starting from the East Bank of Nujiang River in shangpa Town, Fugong County, ending at xiaoshaba, Liuku Town, Lushui City, crossing the Nujiang River in the north and connecting Liuyue class II Highway; ◆ the total length of Fugong Gongshan section is 110km, and all the main lines have been connected.

The paving of asphalt upper layer is being carried out intensively, and it is planned to be completed and opened to traffic by the end of November this year; ◆ the total length of Gongshan Bingzhongluo section is 46km.

Except Jiwa tunnel and Jiwa bridge, all other sections have been connected.

The paving of asphalt upper layer is being carried out intensively.

It is planned to be completed and opened to traffic by the end of November this year.

At present, Nujiang Meili company is making every effort to promote the construction of Meili highway, so as to ensure that the paving of asphalt under the whole line is completed before this year’s national day, so as to realize the connection of the whole line; At the same time, do a good job in checking the deficiencies and filling the gaps in the landscape greening of the whole line of Meili highway to further improve the landscape effect; Accelerate the construction of service facilities along the Nujiang beautiful highway to ensure that the service facilities along the Nujiang beautiful highway will be completed and put into use before October 1, 2020.

The completion and opening of Nujiang beautiful highway, which is of great significance, will greatly improve the rapid transportation capacity of Nujiang Prefecture, promote the integration of Nujiang into the main urban agglomeration of Yunnan Province, the national boutique tourism belt of Yunnan, Sichuan and Tibet, China’s great Shangri La ecotourism area, and contribute to the development of Nujiang Grand Canyon, the “Three Parallel Rivers” world natural heritage Gaoligong Mountain National Nature Reserve provides good traffic support conditions, which will greatly promote the economic development, logistics and transportation, tourism development and national defense preparedness of Nujiang Prefecture and even the whole western Yunnan area, and is of great significance to accelerate the people of all ethnic groups along the line to get rid of poverty and become rich.

After the beautiful Nujiang highway is opened to traffic, the scenery along the way cannot be hidden.

The Nujiang Grand Canyon originates from the Nujiang River at the foot of Tanggula Mountain on the Qinghai Tibet Plateau.

It gathers icebergs and snow all the way.

Under the two-way attack of Gaoligong Mountain and Biluo snow mountain, it surgically deepens a grand canyon with an average altitude drop of more than 2000 meters in Northwest Yunnan, The Nu River roars all the way here with 1.6 times the water volume of the Yellow River every year.

Due to the barrier of Wang Qing’s great hanging rock cliff, the flow direction of the river changed from north to south to east to west.

After flowing out for more than 300 meters, it was blocked by Danla mountain and turned around again from west to East, forming a semicircular bay here, which is the first Bay of Nujiang River.

It is located on the West Bank of Nujiang Grand Canyon.

It is a sacred mountain in the eyes of local people.

Gaoligong Mountain has a vertical altitude of more than 4000 meters.

From the foot of the mountain to the top of the mountain, it has experienced tropical rain forest, coniferous forest, alpine meadow and snow mountain, forming a vertical landscape of “one mountain has four seasons, ten miles and different days”.

The original ecosystem of Biluo snow mountain is well preserved.

There are 15 snow mountains with an altitude of more than 4000 meters.

It is a resort for hiking explorers.

There is a cave eroded by marble hanging high in the mountains and forests.

Because it looks like a moon surrounded by stones, local people call it “ahaba”, which means “stone moon”.

“Stone moon” has now become a tourist attraction, attracting tourists from all over the world.

It is located on the gentle slope on the East Bank of Nujiang River.

There are more than 300 families.

There is a famous, large-scale and beautiful old Madden Church in the village.

It is one of the nine Nu villages in Pihe Nu Township, Fugong County.

It is located on the hillside of Biluo snow mountain on the East Bank of Nu River, with an altitude of more than 2000 meters.

Because it was semi abandoned, it retained the style of the 1970s and 1980s, making people feel that time is still here..

Riding an electric car makes a gorgeous turn, but the end is… Are you right about these two points? 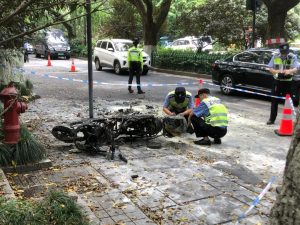