We often say that “the road is like a tiger’s mouth”.

The consequences of carelessness are unimaginable.

On the morning of October 20, in the coastal building section of Nanhai Avenue, Nanshan District, Shenzhen, a man crossed the road on his bicycle and collided with a car with a bang.

Which party is responsible for the traffic accident? On October 20, Shenzhen traffic police released the video of this tachograph, which happened in the accident on Nanhai Avenue, Nanshan District, Shenzhen.

This video is very scary.

The windshield of the car was cracked.

Many neighbors in Shenzhen have seen this video online or in their circle of friends.

They said they had something to say.

What was the whole story of the accident? Who is responsible? Today, the reporter came to Shenzhen traffic police Nanshan brigade and asked the traffic police uncle to analyze it with us in detail.

According to the traffic police, on the morning of October 20, Zhou drove a car of Xiang J brand from the north to the south of Nanhai Avenue, just as a bicycle in the same direction turned left in the right lane.

After the car was found, the person who couldn’t brake the bicycle was Qing, 55, from Hunan.

In the video of tachograph, there were no cars on the road at that time.

When Qing was crossing the road, He didn’t look back at the vehicles behind him.

As for whether the car is speeding, inspection and appraisal are being carried out at present.

Some neighbors in Shenzhen said that they often see such things as riding bicycles interspersed in the motorway.

Shenzhen traffic police said that on the 20th, there were three single illegal accidents involving cyclists.

They hoped that cyclists would improve their safety awareness and abide by traffic rules when cycling. 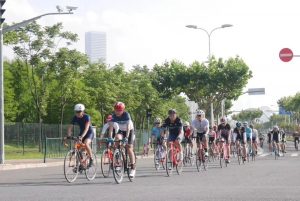 [Video] they suddenly fell to the ground and couldn’t get up. At this time, they appeared!