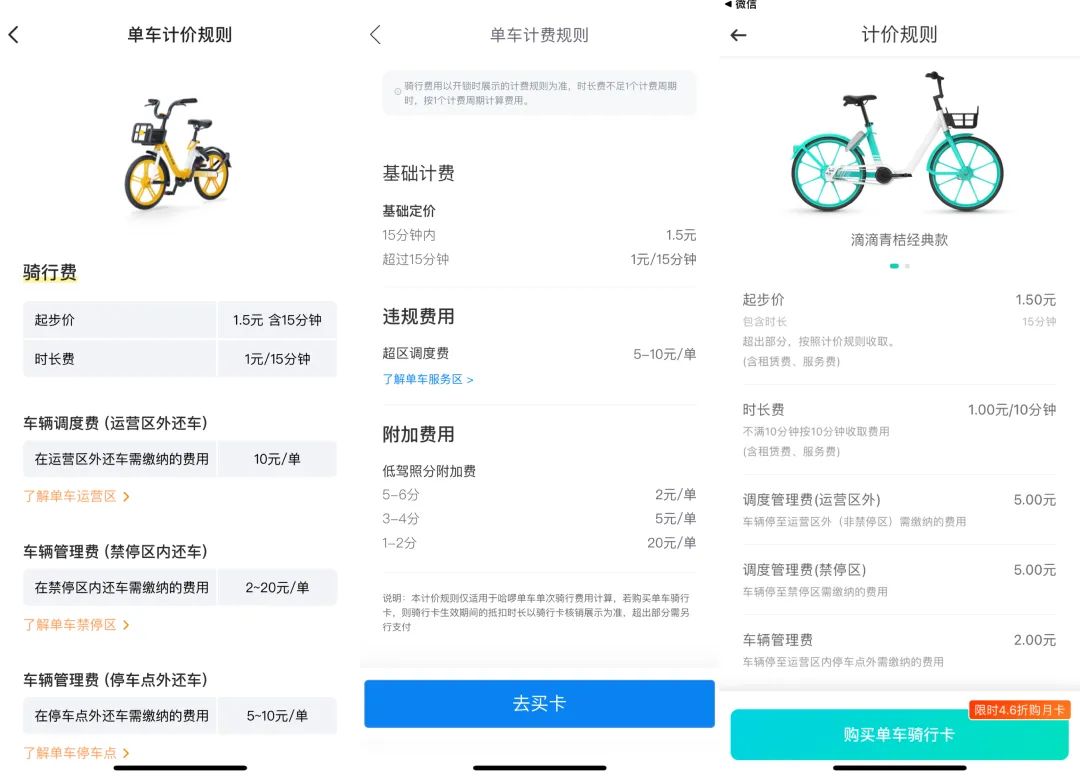 So far, the price of package cards of the two bicycle giants has been adjusted to the same level, and the increase of cycling cards since this year is between 40% and 50%.

As for the reasons for the price increase, both Haro bicycle and meituan bicycle said in the announcement that it was due to the increase in hardware and operation and maintenance costs.

The price increase of cycling card enterprises said that it had little impact on users.

After combing the current cycling cards, the reporter found that there was no discount for meituan bicycle and Haro bicycle for 7 days, 30 days and 90 days, respectively, at 15 yuan, 35 yuan and 90 yuan; Qingju bicycle is 10 yuan, 25 yuan and 75 yuan respectively.

In terms of charging rules, as far as Shanghai is concerned, both the Haro bike and the meituan bike are charged 1.5 yuan within 15 minutes and 1 yuan every 15 minutes thereafter.

Equivalent to 4.5 yuan per hour.

The charging rules of meituan bicycle, Haro bicycle and Qingju bicycle in Shanghai are different from those of other brands except the three giants.

Currently, there are few bike sharing apps that can be used normally in the market.

Among them, the small green bike app shows that the package purchase list fails, and the charging price of a single ride is 1 yuan for the first 30 minutes.

The charging price is increased by 0.5 yuan for every 30 minutes, that is, 1.5 yuan for one hour of riding.

After the small green bicycle charging rules entered the market with a price war, the price of shared bicycles has been rising all the time and has been paid attention by the market supervision department.

Since 2019, mobike, Haro and Qingju have entered the cycling era of at least 1.5 yuan for 30 minutes.

The charging rule for Hello bikes in Beijing has changed to 1 yuan per 15 minutes.

The pricing rules in Guangzhou were adjusted to 1.5 yuan per 30 minutes, and the price increased by 50%.

For example, the starting price of Shanghai mobike bicycle has increased from 1 yuan to 1.5 yuan within 15 minutes, and the duration fee remains unchanged.

If you ride for more than 15 minutes, you will charge 0.5 yuan every 15 minutes; The starting price of Shenzhen mobike has increased from 1 yuan to 1.5 yuan within 30 minutes.

After riding for more than 30 minutes, the charge is 1 yuan per 30 minutes.

On June 3, 2020, the price supervision and Competition Bureau of the State Administration of market supervision, together with the Anti Monopoly Bureau and the Internet supervision department, held an administrative guidance meeting, requiring 8 shared consumer brand operating enterprises such as Hello, Qingju, meituan, monster, Xiaodian, caller, Jiedian and soudian to rectify within a time limit, clarify the pricing rules, strictly implement the clearly marked price, and standardize the market price behavior and competition behavior.

At the end of August last year, according to the information on the website of the State Administration of market supervision, the sharing consumption brand management enterprises, including the three sharing bicycles, actively reformed and achieved results.

The price rise in the sharing consumption field was effectively curbed, and the price was gradually transparent and standardized.

At present, sharing bicycles is a part of the slow traffic system.

After the price of sharing bicycles rises, many netizens call “bicycles are more expensive than buses”.

Some netizens said that it costs 2.5 yuan to ride a 16 minute shared bike, while the bus costs only 2 yuan.

How much will the price increase of bicycles affect users? An industry insider explained to the pengpai news reporter that bike sharing is a point-to-point solution to users’ travel needs, which is different from the needs met by buses and subways.

However, some areas still withdraw from the market after operating for a period of time.

“Bike sharing has certain social attributes, but it is also characterized as an enterprise behavior.

The government usually gives support in terms of policies and public resources.” “The price increase of various cycling cards has little practical impact on the majority of users.” The person in charge of Haro bike recently told pengpai news that Haro’s shared bikes are operated in more than 400 cities across the country.

Previously, some small cities have adjusted the price of publications within a certain range, including various cycling cards with different lengths.

“At that time, we only adjusted the publication price, and the actual card purchase price of users on the platform is the discount price after the original price.

Ding Daoshi, an Internet analyst, told pengpai news that the increase in the price of shared bicycles will lose some users.

However, since the price of the Changqi card of bicycles has increased this year, most of the users who buy bicycles are loyal and just needed users, so it is unlikely to lead to large-scale loss of users.

For enterprises, the price increase can further optimize the financial structure and help them realize profits as soon as possible.

The revenue of bicycle business continues to grow without realizing full profit.

At present, there are three pillars in the shared bicycle market, mainly meituan bicycle (formerly mobike), Haro bicycle and Qingju bicycle under Didi..

The best time to travel in Qiandao Lake! Enjoy the moon, visit the lake, ride and camp… Visit here →

These mistakes that novice cyclists make