It has been a comfortable sunny day in Shanghai for the past three weeks. 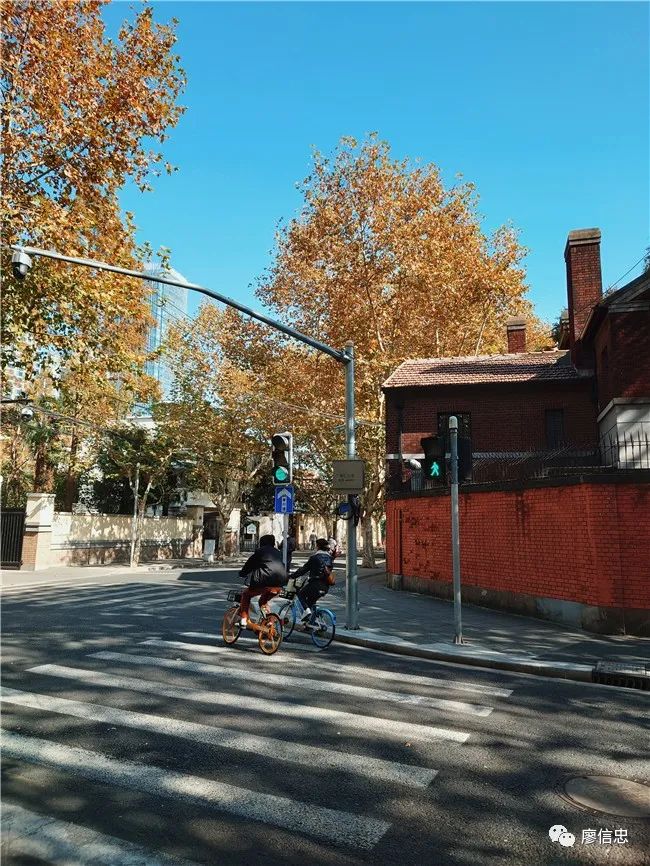 The sun is warm and lovely in the afternoon. 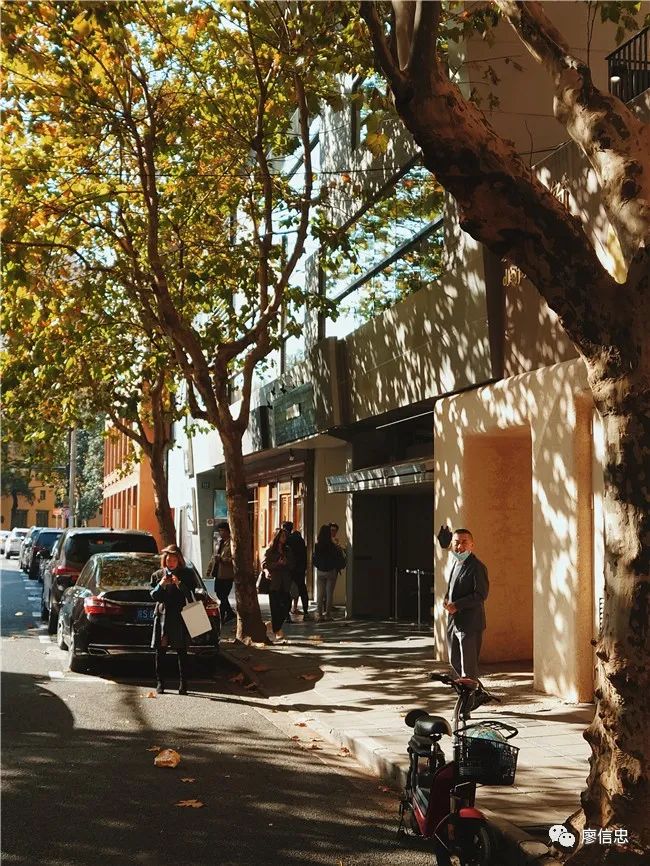 The sky is as pure as the young woman Bai Jie’s mind. 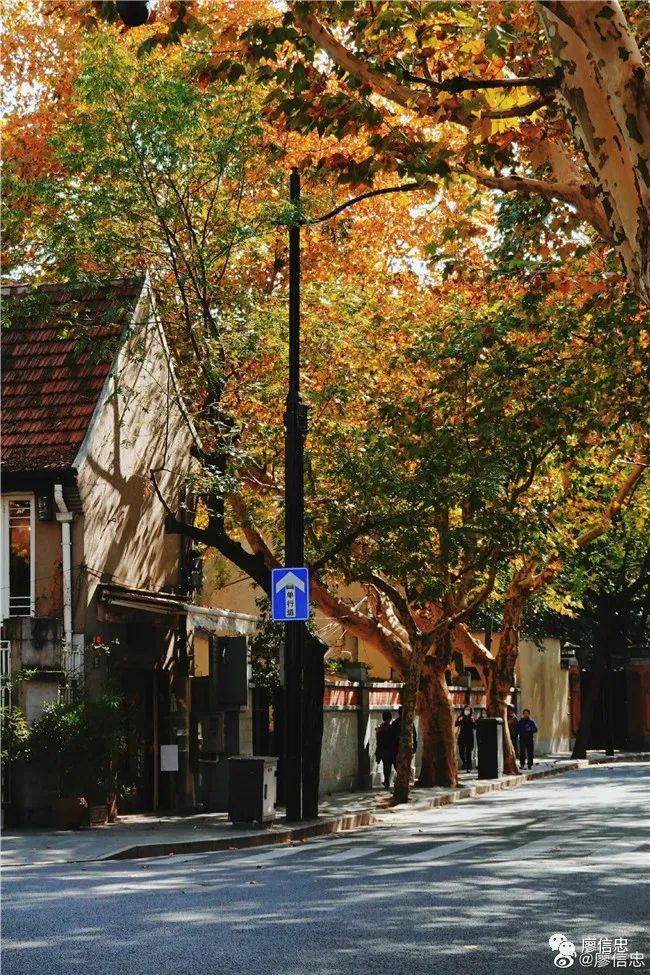 It seems that there are some secrets hidden. 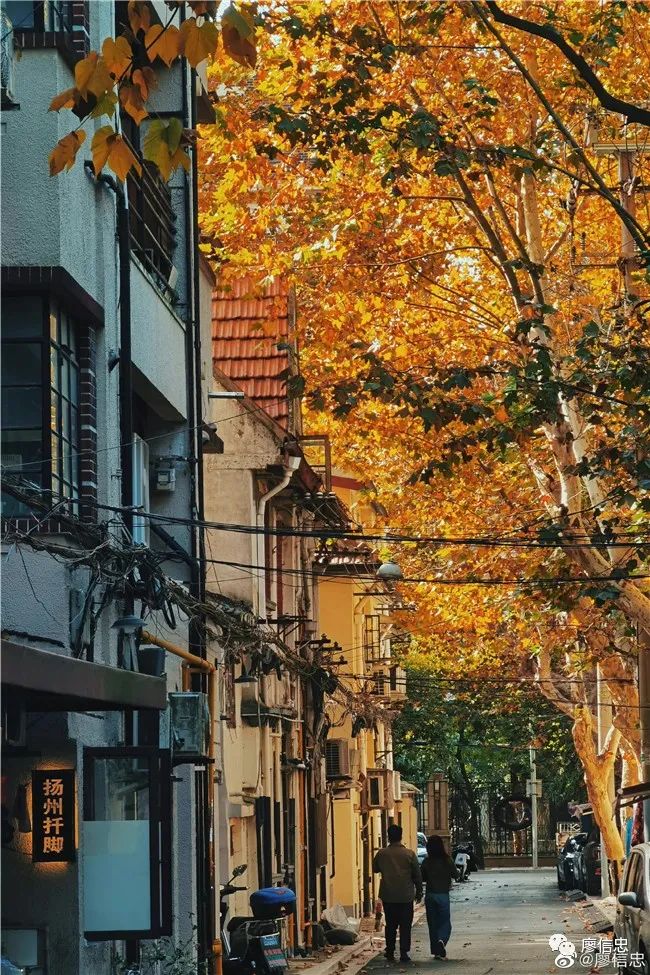 Shanghai always has such a pleasant time before winter every year. 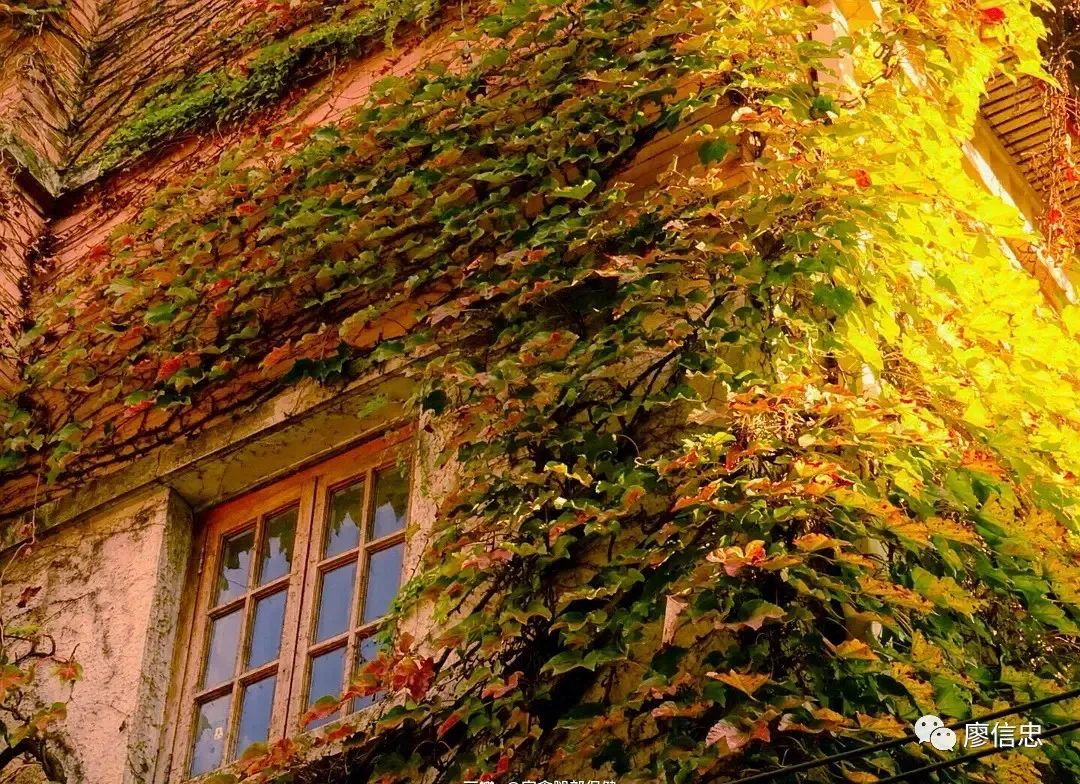 A few days ago, Shanghai announced those streets that don’t sweep away fallen leaves. 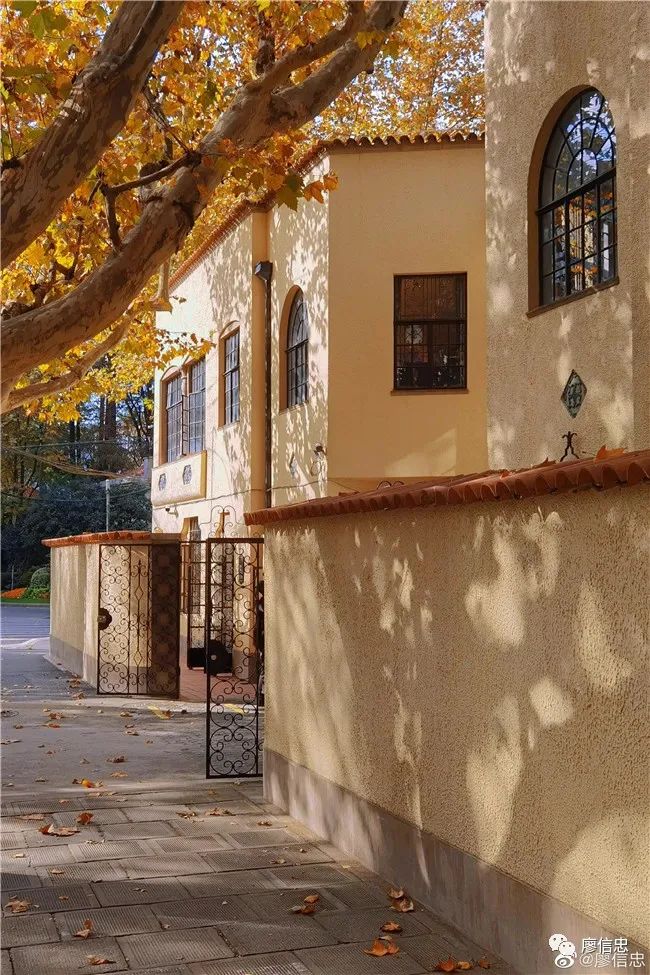 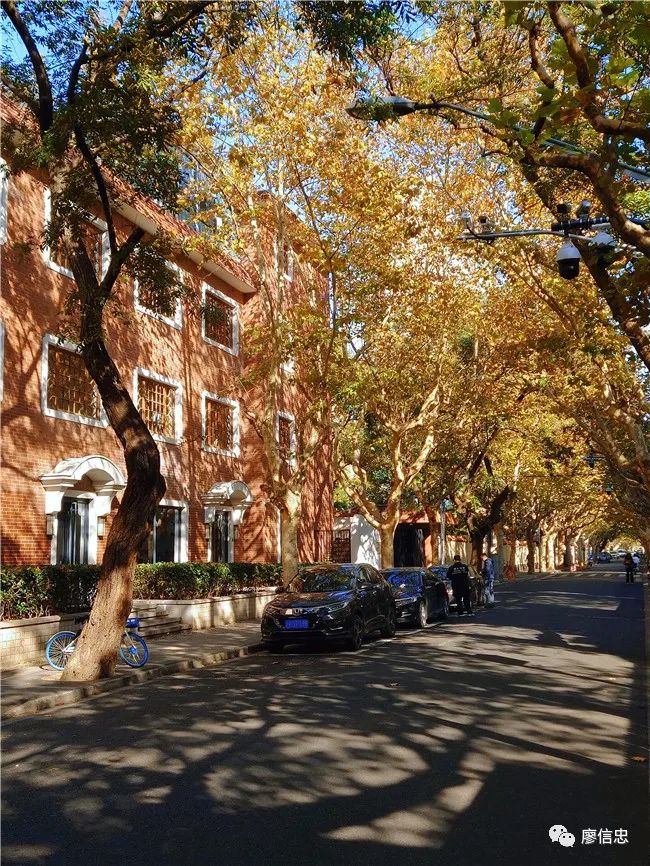 some people feel it’s a pity, but it gives many people a sigh of relief; In Changning District next door, a short section of Hunan Road between Xingguo road and Huashan Road is better than nothing, which can also make up for some shortcomings. 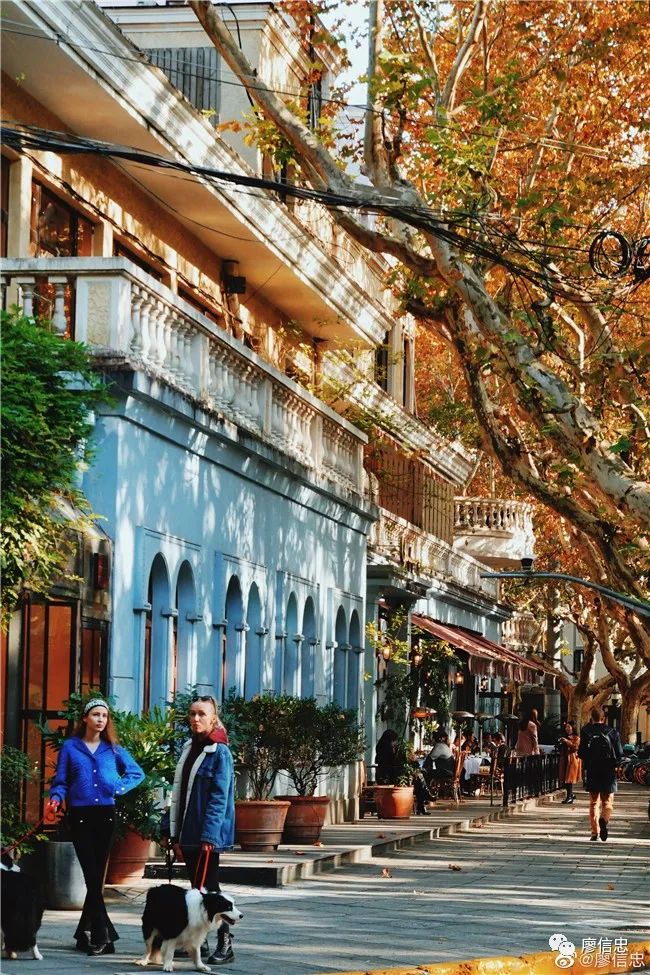 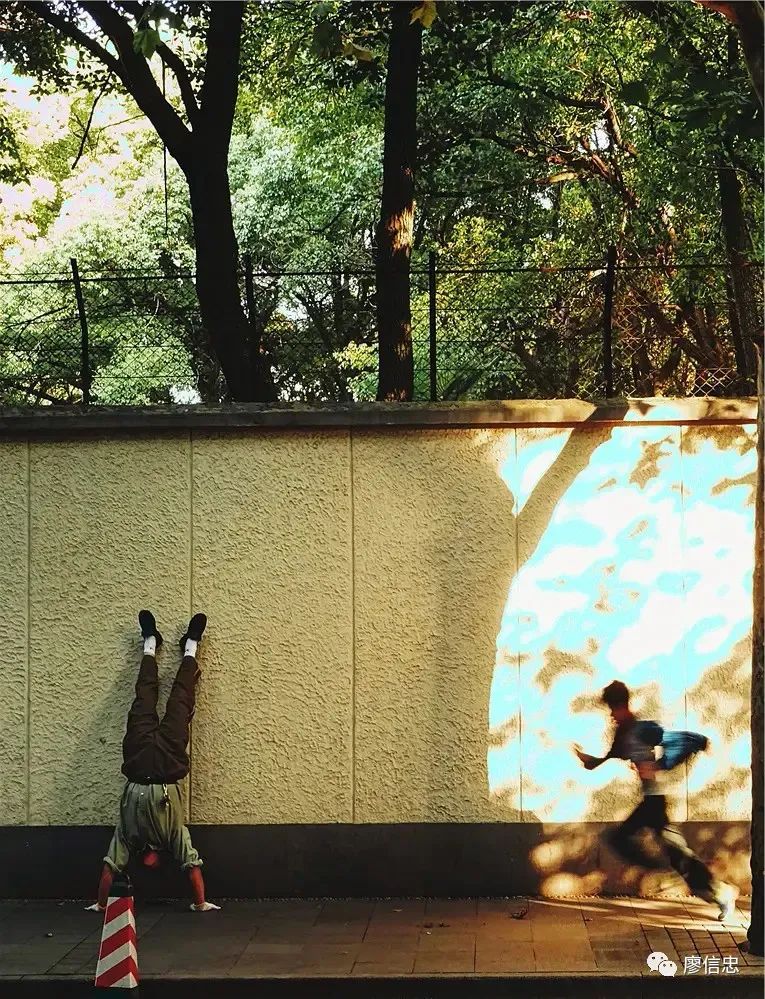 The sanitation workers did not sweep it, but the stores automatically swept the fallen leaves in front of the door. 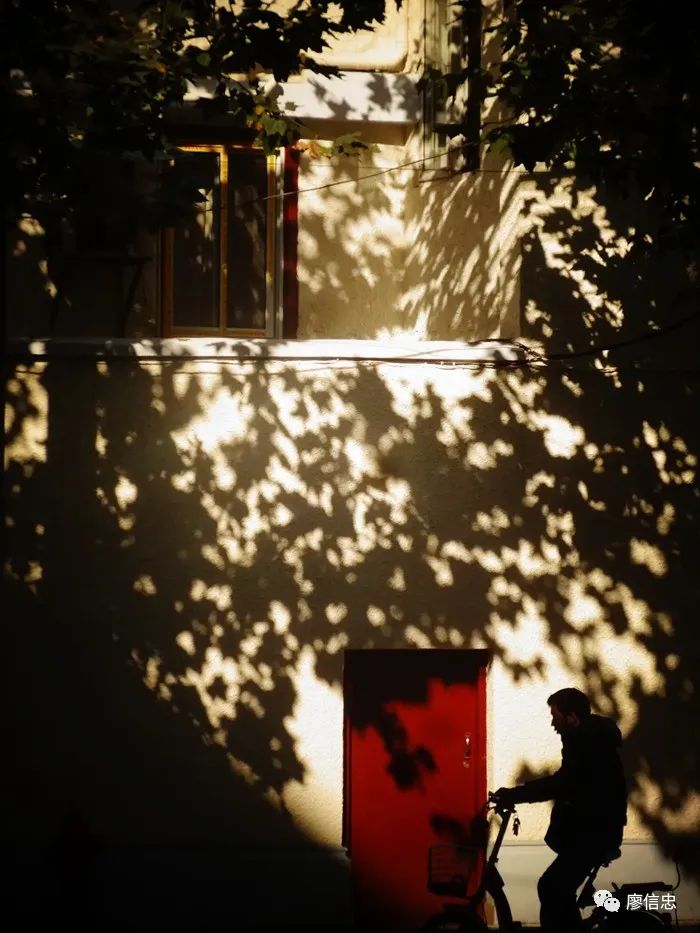 The Wutong law concession will be called out in the years, but the correct one is called “former French concession”. 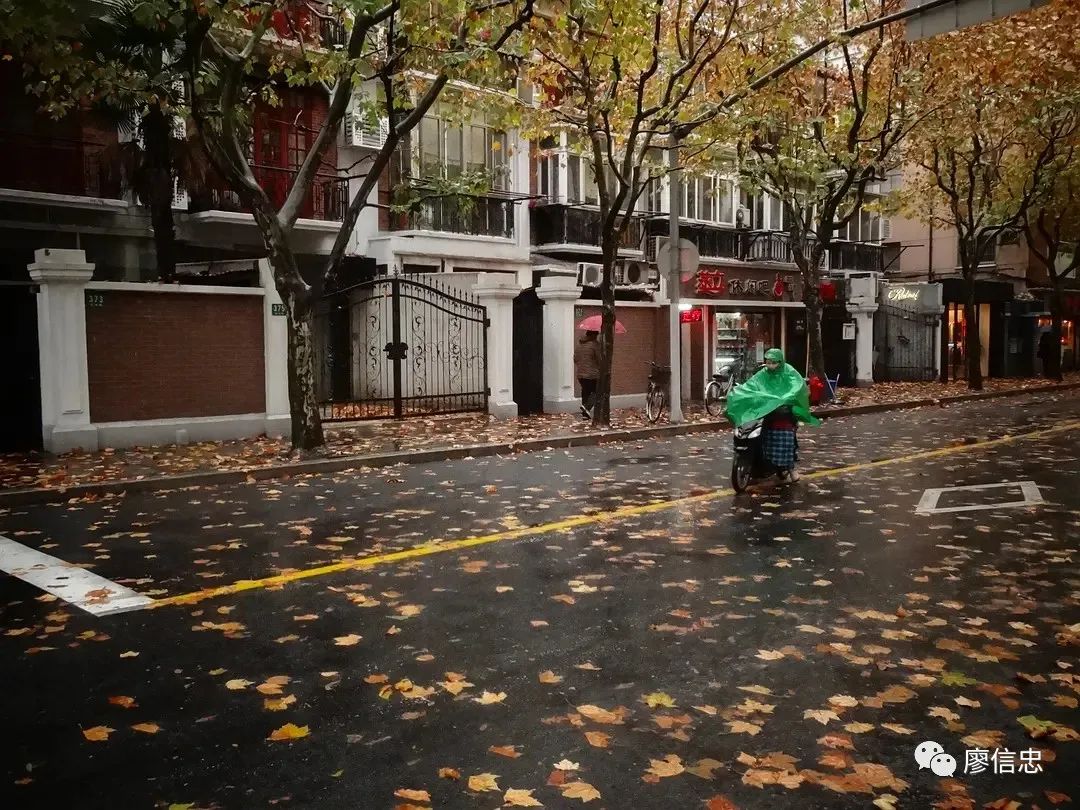 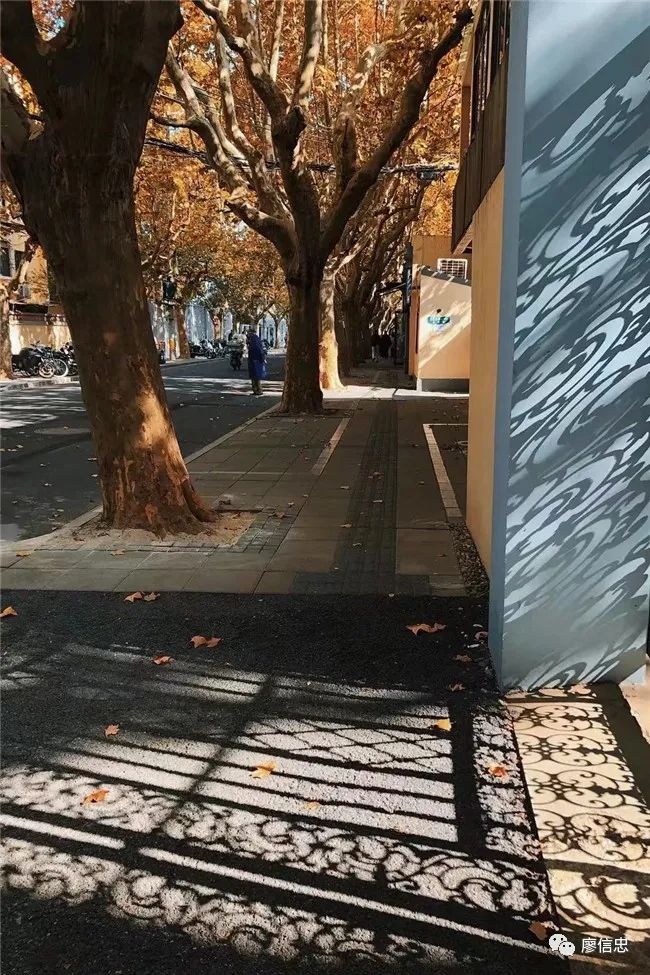 But we all love to call it “Indus area”. 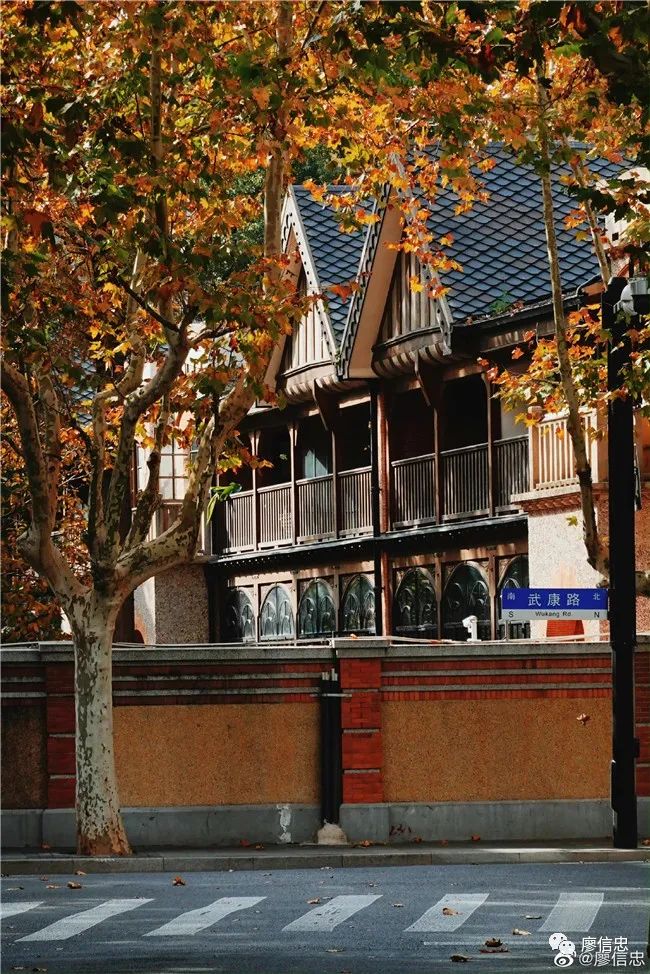 This area is just a common beauty block in the other three seasons. 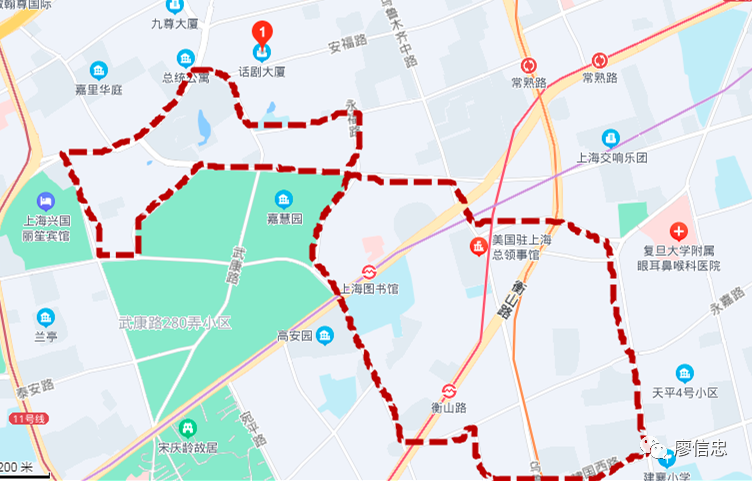 However, in late autumn, she exceed the standard line. 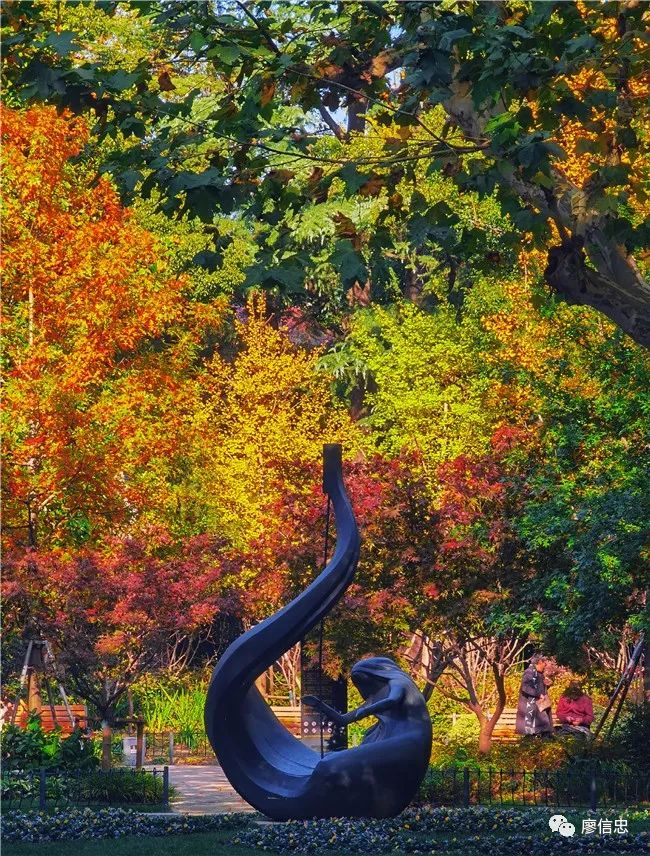 Ah! In the late autumn of Shanghai, macron will be silent and de Gaulle will cry; Napoleon was silent and exclaimed that France (four voices) was orthodox in Shanghai.

Every late autumn in the past two years, I’d better choose a sunny afternoon when there are few people and vehicles.

The setting sun will incline to the west at more than one o’clock in the afternoon.

If you’re on the North-South Road, please slow down and feel it slowly.

The sky light dyes the street into a golden and strong warm color through the semi yellow leaves.

At two or three points, the fragments of light and shadow climb up bit by bit, Projected on the mottled walls of old foreign houses.

The branches and leaves of the two bypass roads are intertwined to form a tree hole.

Look to the West.

The end of the hole is burning like gold and brilliant.

You also have to wear it and feel the overwhelming autumn.

After I came to Shanghai, I realized that “autumn is clear and crisp”.

In the place where I can go to the seaside in winter in the south, I don’t have much concept of “autumn”, It’s hard to accept that leaves change color and lose light.

The cold air brings some residual temperature of this year.

It is fresh, dry and quiet.

It seems that it can wash away the filth accumulated in the body this year and erase your complaints about this fast-paced real city.

All the descriptions of “autumn” are slowly felt when the scope of life goes north; Autumn in Shanghai is not like the north, it is fascinating, so unbridled and enthusiastic.

The autumn of Shanghai is short of a sad and beautiful.

Even in late autumn, the leaves of Wutong are always yellow and green.

From September, every rain will brighten the city’s scenery.

Every time it rains, several pieces of Wutong leaves that can not wait to turn yellow are knocked down.

In the north, sometimes there is a sudden gust of wind, and the leaves are rolled down like a blizzard.

In Shanghai, when a gust of wind comes, the leaves are pieces.

They have to sway slowly in the air for several times before they fall to the ground.

Sometimes it just floats on your shoulder and feels like a touch in your heart: ah! A year will pass again! Autumn is too comfortable.

If you are comfortable, you have time to think.

and the time seems to be getting faster and faster.

The day seems to have ended without doing anything.

Think about the past year and another year.

“Autumn sadness” is a classic theme of literary and artistic youth.

For example, in Li Bai’s 357 words, “the fallen leaves gather and scatter, and the jackdaws are surprised again”.

“The moon building rests on a single chair, and the wine enters the sadness and turns into Acacia tears……” It’s probably that depression and solitude in autumn are easier to express their feelings.

However, Liu Yuxi, especially the second year of secondary school, “Others” have been sad and lonely in autumn since ancient times “I say autumn is better than the spring Dynasty”.

The atmosphere of autumn is clear, spring is beautiful and autumn is fruitful.

The big Chengdu of the year is in autumn, followed by winter, so as to prepare for the coming year.

Spring, summer, autumn and winter are generally regarded as the third season, but if autumn comes first and looks at other seasons from the perspective of autumn, the emotion is completely different.

I love Zhang Yusheng most of all the songs about autumn I am a tree in autumn.

I fell in love with it when I heard the first section of the prelude in middle school.

When I listen to this song in middle age, I have a special feeling.

I probably really realize that loneliness is the norm of life.

When I first listen to solitude, solitude does not follow the flow.

However, mianzang has unlimited hope for the future.

The street park at the intersection of Xingguo road and Hunan is a small and dense area.

Flowers bloom in spring and purple in summer.

In late autumn, the trees are more like trying to spend their budget by the end of the year: crisp green, yellow, golden yellow, red and fiery red.

They use their last strength to bring out the most beautiful colors, and then they can rest for a few months.

It’s the sound of autumn.

The wrinkled leaves are broken to pieces in an instant.

A gust of wind swept them away and became dust on the earth.

Shanghai’s fallen leaves are not like North or North America.

The leaves are ginkgo, red maple, and red, yellow, green, and fall into a coloring dish.

The leaves of Wutong are scattered and shrivelled, and wrinkled and yellow.

If they do not sweep, it seems romantic and interesting to tread on the leaves.

You may suddenly feel that your feet are soft and prone to step on.

The leaves stubbornly left on the tree wither and yellow and curl with the colder climate.

In the end, they will not be too yellow.

There are fewer and fewer leaves, and the outline of branches is clearer and clearer.

However, there are always some leaves, so that pedestrians who occasionally look up have a little attachment to this autumn..

Heartache! The 7-year-old girl died after months of treatment