Today, on June 18, US President Biden rode near his beach house in Delaware.

In full view of the public, Biden, who was about to stop, suddenly fell down.

Biden told people around him that he was “in good condition”.

According to Reuters on the 18th, Biden stopped riding suddenly to pay tribute to his supporters.

Unexpectedly, Biden’s foot got stuck on the pedal of his bicycle when he stopped, which made him lose his balance and fall to the ground.

After the wrestling accident, Biden spent a few minutes chatting with the crowd gathered around to watch him ride.

Later that day, he appeared outside a church in Delaware.

Someone asked Biden how he felt after wrestling.

He made a series of jumps to show his health.

On June 17, Biden and his wife Jill celebrated their 45th wedding anniversary at their Delaware home.

The two of them completed a morning ride together.

International news adriennewatson, spokesman of the US National Security Council, confirmed on June 18 local time that jacksullivan, assistant to the US president for national security affairs, tested positive for novel coronavirus.

The statement said that Sullivan currently has no symptoms and has not had close contact with President Biden recently.

A questionnaire survey conducted by the Japanese media on the candidates for the 26th Senate election showed that among the 427 respondents, 50.1% were in favor of prime minister Fumio Kishida’s government’s amendment to the Japanese Constitution, slightly higher than 46.6% were against it.

Recently, the floods in Assam, India, caused by continuous rainfall, have killed 63 people as of June 19.

The Hindustan Times reported that at about 12:00 on the 19th, Indian time, the engine of a civil aircraft carrying 185 passengers caught fire shortly after taking off.

In the video taken by local residents, it can be seen that the aircraft was emitting thick smoke when it was descending rapidly.

However, it was reported that the plane finally made an emergency landing and the passengers were lucky to escape.

From july1,2022, in addition to necessary passports and visas, foreign passengers can enter Thailand without isolation only with the complete vaccination certificate of Xinguan vaccine or the nucleic acid negative Certificate (paper or electronic) 72 hours before departure.

Sara duterte, daughter of the current Philippine President duterte and mayor of Davao City, was sworn in as the new Philippine vice president in his hometown Davao City.

During his visit to Germany, Singapore’s deputy prime minister and Minister of economic co-ordination Wang Ruijie tested positive for novel coronavirus and is currently being quarantined locally.

On June 19, a source from the South Korean government disclosed that the South Korean Foreign Ministry had asked the Russian side to provide information to confirm the details of the casualties of South Korean mercenaries in the Ukrainian army.

According to a source quoted by Tass News Agency on the 18th, the leader of the Asian speed battalion who surrendered in Mariupol has been sent to Russia for investigation.

On June 19, the French National Assembly election entered the second round of voting.

The center right party alliance led by President macron is expected to obtain the most seats, but it is still unknown whether it can obtain more than half of the seats.

On June 18, a Sikh Temple in Kabul, the capital of Afghanistan, was attacked.

The extremist organization “Islamic state” claimed responsibility for the attack after the incident.

According to the Syrian news agency, on June 18 local time, the U.S.

illegal garrison in Syria used 40 trucks loaded with looted Syrian wheat to travel from Hasek province to Iraq through the illegal border crossing point Walid between Syria and Iraq.

Recently, the general office of the Central Committee of the Communist Party of China (CPC) issued the “Regulations on the management of leading cadres’ spouses, children and their spouses running businesses” and issued a notice, requiring the relevant party committees (leading Party groups) and their organizational (personnel) departments to improve their political positions, consolidate their management responsibilities, improve their working mechanisms, strictly enforce discipline requirements, and implement the “Regulations” to the letter.

Classes and buses in Shaoguan, Guangdong Province were suspended due to days of rainstorms, and water accumulated in multiple sections.

The Yellow flood warning was issued in Guangxi, and the measured maximum flood since the establishment of Lingqu station in 1956.

Nearly 50% of the drought area in Inner Mongolia is expected to ease in some areas in the next five days.

The Yellow River started the water and sediment regulation before the flood season this year, which is expected to take about 20 days.

Another tornado in Guangdong? Foshan: it is a weak tornado with a small scale.

Its life history is about 1 minute.

Macao added 12 new crown positive cases and entered the state of immediate prevention since the early morning of the 19th.

From the 19th to the 21st, the whole people were tested.

Financial news the human resources and Social Security Department of Sichuan Province recently announced that “Sichuan Province will timely start the trial work of individual pension according to the unified deployment of the state”, with a maximum of 12000 per year.

Henan new wealth group was investigated: the nationality of the actual controller had moved abroad and had offered 23million bribes.

The dog coin has risen rapidly in the short term, and musk will continue to support the dog coin.. 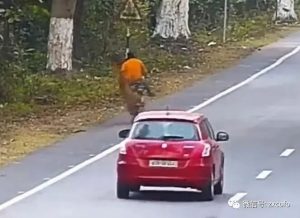 A man is knocked down by a leopard while riding a bicycle in India. A Ranger reminds commuters to be safe

Is the post-90s single parent father still attending kindergartens across the country after riding 4139 kilometers with his daughter?