Earlier, when I was playing in Berlin, Germany, I found a red or other color path beside the street, which was printed with bicycle patterns.

Later, I learned that in order to encourage everyone to travel in an environmentally friendly way, this is a bicycle lane specially built by the German government.

At that time, as a tourist, I rented a bike and ran around the city for more than ten days.

When I couldn’t ride, I carried my bike to the subway or locked it on the guardrail in place, and went to pick it up the next day.

After a long time, I suddenly found that there were a group of new urban cycling enthusiasts in Chengdu.

When I stepped on the car, the wheels rolled and shuttled through the streets and alleys of the city.

The purpose of riding is different.

• on the streets of Berlin, the bicycle lane next to the motorway.

In the 1980s, cycling was the most important way of travel for our people.

China’s bicycle ownership ranked among the top in the world and was even more known as the “Kingdom of bicycles”.

In the 1990s, motor vehicles became dominant, and cycling seemed to have no “face”.

A few years ago, bike sharing has warmed up the trend of cycling.

This time, it has returned to everyone’s vision with keywords such as low-carbon, environmental protection and flexibility.

I’m really curious about the role of cycling in today’s rapid urbanization? Who’s riding? So I talked to some good friends of you Chengdu.

Du Mingjun, 35, is a construction practitioner.

Du Mingjun, 10, has the first bicycle in his life, a stroller.

He is happy to think that he can operate a machine to a further place.

In high school, he had a more professional bicycle, the giant mountain bike.

At that time, cycling had social attributes, because all the students rode it, and everyone went to school and school in groups.

• The car that Du Mingjun and he assembled by himself likes bicycles, such as road bikes, mountain bikes, scooters and climbing bikes.

If solid teeth are one type, it can also be included in the list.

Solid teeth is commonly referred to as “dead flying”.

It belongs to the racing field car, which is just taken out for daily riding.

It was regarded as a trend item at that time.

The bicycle brands he knows are also introduced by his friends who play dead flying: Cinelli / COLNAGO in Italy, Colossi in the Netherlands, Panasonic / Nagasawa / 3rensho in Japan…

So many bicycles, how to choose a bicycle suitable for urban cycling? Du Mingjun believes that the standard is the brand, followed by reliability, because he doesn’t want to repair the car all the time.

The car should be smooth, compact and not loose (if riding a road car, comfort is another thing).

The other is how to ride faster, where the car lock won’t fall off, and so on.

Of course, appearance is also important.

After all, it’s a piece to match your own out of the street.” Then he added, “ha ha, I’m not a professional driver and can’t say anything.” Mingjun rides a bicycle in the city to commute.

On the surface, he can actually take the subway and drive.

His real purpose is to find an excuse to ride under the guise of commuting.

The purpose is to have no purpose and find a purpose, because cycling itself is motivation.

As for riding out, it doesn’t matter what happens, as long as it doesn’t rain.

Sometimes when he worked late, he would ride more than ten kilometers home; Sometimes he competes with himself.

He often asks himself: why can’t he ride and go! Sometimes the Buddha system is a little better.

Ride out to bask in the sun, drink coffee and explore the shop.

“The car is a friend who just follows me without talking.

I appreciate it and accompany me on an unknown journey.” He said cycling increased his way of being alone and socializing.

Socially speaking, he feels that he can meet but can’t ask.

He doesn’t force him to meet the right person and ride with the right route.

He pays more attention to his personal experience of solitude.

“If the happiness in the past was a simple riding action, my happiness now is that I can ride out to explore and take photos.” He likes to record riding and share his photos, and convey a lifestyle and attitude to others.

Du Mingjun thinks what he sees and hears is an emotional output.

Another is that he used to try to go to work by bike.

The distance to work is more than ten kilometers, which is very suitable for cycling, but he needs to take the Third Ring Road from home to the company: from the beginning of the construction of the Third Ring Road to the time when the greenway ring Road and the park along the road have not been planned and built, there are many broken roads and broken roads, so bicycles can’t go through, and it’s inconvenient to detour.

Cars, electric vehicles and motorcycles are mixed, and the riding experience is very poor.

They cut off halfway and gave up cycling for many times.

A few years ago, he went to Paris and Tokyo.

He admired the city planning there and was very friendly to bicycles.

Now, Chengdu has also begun to advocate the park city and the green belt around the city, which not only give pedestrians a lot of benefits, but also virtually improve the urban riding experience.

Although it sounds simple, maybe this is the primitive and pure happiness that urban cycling brings to cyclists.

When did the founder of gray graphic designer paperplay start to contact bicycles? Huihui said that when she was a child, she liked to ride a bike.

At that time, she rode a bike and flew a kite.

The kite flew in the sky.

It felt great to ride on the ground by herself.

Therefore, although the scene and feeling of riding a bike for the first time are long and vague, what remains is always that carefree feeling.

• ash and her Brompton are different from professional cyclists.

She doesn’t pay too much attention to the type of cycling.

She just feels that cycling has become a part of life.. 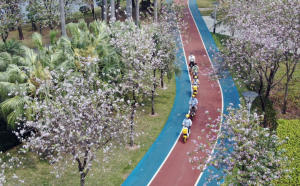 Meituan bicycle launched the small goal of “one person riding to reduce carbon by one ton”. After spring, it has reduced carbon by 25000