“If you don’t do something now, you won’t do it all your life.” This is a classic line in the 2006 riding film etude.

I believe many people have been beaten by this sentence, and I am one of them.

So when it comes to cycling, I always subconsciously think it’s a very hot-blooded thing.

Every time I meet riders on the road, I can’t help but stretch out my thumb to them and look at the figure trampling away.

My heart is filled with the memory of my young riding dream and the dusty door suddenly vibrates.

After entering the society, for various reasons, it is difficult for us to have the willfulness of walking regardless of life when we were young.

Nevertheless, we still love and yearn for every trip.

For the social animals with less time, if you want to experience the fun of cycling, cycling in Qinghai Lake is a good choice.

Galloping on the flat road, the 360 ° flowing beauty around you, the blue and open lake in the distance, the wheels rolling freely under your feet, and the oncoming breeze stir your heart.

How long have you been boiling with blood? Qinghai Lake, the most beautiful lake in China.

In 2005, China National Geographic conducted a lake beauty contest, and Qinghai Lake was rated as the first of China’s most beautiful five great lakes without suspense.

Since then, the characters “China’s most beautiful lake” have been erected on the Bank of Qinghai Lake.

It was renamed “Qinghai” since the Northern Wei Dynasty.

You may mistakenly think that the name of Qinghai Lake comes from a lake in Qinghai Province, which is too straightforward.

In fact, the name of Qinghai Lake comes from the Tibetan “Tsowenbu”, which means “blue sea” and “blue sea”.

Qinghai Lake presents different beauties throughout the year, and the best tourist season is from May to October every year.

In May, when the temperature warms up and the baby birds break their shells, Huangyu, a rare species unique to Qinghai Lake, also begins to lay eggs; 6、 In July and August, the meadow began to turn green, and rape flowers and various wild flowers were in full bloom.

At this time, it was the most beautiful and lively season of Qinghai Lake; In September, the migratory birds began to prepare for the transition.

When the time came, they spread their wings and flew to the horizon; After the golden Monday in October, tourists plummeted, and Qinghai Lake returned to its former calm, waiting for the next Carnival after winter and spring.

From June to August every year, in its most beautiful season, the “Qinghai Lake International Road Cycling Race” is also launched.

It is the top multi day cycling race in Asia and the international road cycling race with the highest altitude in the world.

Due to the characteristics of high altitude, long distance and multi climbing, the race becomes more suspense.

The race route design takes Qinghai Lake as the center and extends to the surrounding areas.

This race is not only wonderful, but also highly ornamental.

In addition to the contestants, there are also many enthusiasts who come to Qinghai Lake to ride around the lake every year.

Along the way, there are rich landscapes, a sea of flowing flowers on both sides, prayer flags fluttering in the wind on the meadow, and the blue lake in the distance is in sharp contrast to the nearby sand mountains, which also attracts countless tourists.

What color is Qinghai Lake in your eyes? There are few colors with memory about Qinghai Lake, but each color is very extreme and unforgettable.

The blue surface of the lake with the same color of the sky, the golden rape flowers all over the mountains, the golden sand mountains one after another, the afterglow of the romantic orange sunset, the white pure snow mountains and salt lakes in the sky constitute a charming Qinghai Lake.

The blue of Qinghai Lake is not ordinary blue.

Seeing other lakes may feel mixed with other colors, but the blue of Qinghai Lake is blue, pure blue, very pure blue.

The rape flowers in Qinghai Lake are also unusual.

The golden rape flowers are set off by the blue lake.

The rape flowers are spread all over the Bank of Qinghai Lake, which is extremely spectacular.

In the reflection of sunshine and clouds, with Tibetan compatriots, yurts and livestock, the beauty is eye opening.

There is a desert on the East Road around Qinghai Lake.

It is rare to see a desert by the lake.

This desert is not big.

It looks golden from a distance in the sun.

The sand here is very delicate.

You can come here for sand skiing and other entertainment projects in summer.

When the orange light shines on the lake, the world is shrouded in its warmth.

Chaka Salt Lake is also known as “the land of the sky”.

It is so beautiful that you can take a small train here to look at the grandeur of the Qilian Mountains, feel the snow of the Kunlun Mountains, see the snow mountains reflected on the salt lake, and encounter a white romance with the same landscape.

It’s not the most impressive route to see Qinghai Lake, whether it’s from the entry-level map.

Qinghai Lake is 360 kilometers around the lake.

When straightened, it is 60 kilometers farther than driving from Chengdu to Chongqing.

The best way to feel Qinghai Lake well is to ride slowly.

You can feel the charm of Qinghai Lake in different aspects with the constantly rotating wheels.

For cycling enthusiasts, even if you have ridden classic cycling routes such as Sichuan Tibet line, Xinzang line and Hainan line, if you haven’t ridden Qinghai Lake, your cycling route is almost interesting.. 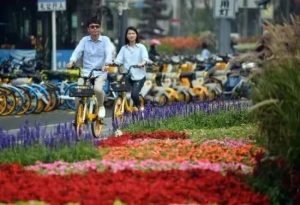 Cycling carbon reduction! You can also achieve this small goal

Do you ride motorcycles and electric vehicles have these behaviors?