In the 1980s, there was a huge flow of bicycles on the streets.

Today, this scene seems to be back.

Walking in today’s society, we need to hold all kinds of certificates to prove our identity and ability, but we forget to assess “safety”, the most important prerequisite for travel.

Bicycles, bearing the memory of countless Chinese people, have been a necessity for a family for a long time.

With the emergence of bike sharing in the streets and alleys, the “bicycle kingdom” in memory has come back to life.

However, the bicycles that run through the streets and alleys bring back people’s life and uncivilized riding habits.

With the increasing frequency of cycling, how to ride safely is also in urgent need of our attention.

When Chinese people lament the convenience, health and green of bicycles, they should also start to think about a question: Do we need a riding license? Cycling should have been a wonderful thing/ On March 26, 2017, on Tiantong Road, Shanghai, an 11 year old boy riding a shared bicycle collided with a bus, fell to the ground, was involved in the bottom of the car, and died after invalid rescue.

In April 2017, a young man in Beijing riding a shared bicycle near Jingmi Road, Chaoyang District, violated traffic laws and regulations, causing another cyclist to fall down with his bike and be run over by an oncoming bus, killing him on the spot.

On May 25, 2017, a 10-year-old boy in Tianjin fell down while riding a shared bike, and the brake handle was inserted into his thigh.

After the firemen broke and cut, the boy was sent to the hospital for treatment.

During the Spring Festival this year, an orthopaedic hospital in Shenzhen treated a child who was more than 2 years old.

The mother of the child put the bike into the front basket when she was riding a shared bike, and accidentally threw the child to the ground, resulting in a fracture of the right tibia and fibula.

Search for bike sharing accidents on the Internet, and there are many similar cases.

According to relevant statistics, in the past 2017 alone, there were 129987 violations involving shared bicycle traffic in Shenzhen, and 12 fatal accidents.

The main reason for accidents is that shared bicycles enter the motorway for driving, 11 of the 12 accidents are related to this, and there are 3 cases of crossing the oblique motorway and 2 cases of reverse traffic respectively.

Dangerous cycling on the streets of Beijing/ Jingchu is only a city in Shenzhen.

In fact, since the birth of shared bicycles, accidents caused by dangerous riding have never disappeared.

People are used to pointing the finger at bike sharing operators, but the reasons behind the accident are far from simple.

For example, the state stipulates that children under the age of 12 are not allowed to ride bicycles, but it is not uncommon for children to ride shared bicycles in the streets, and even some parents help them unlock.

For another example, the bicycle company has repeatedly reminded that the car basket can only contain debris, and no one can sit on it.

However, many bold parents still put their children in the car basket.

Traffic lights should be observed.

You should ride on the right, not encroach on the motorway, and not ride alone…

We have relatively perfect riding rules, but there are always violators who are taking chances, which eventually leads to bitter results.

In addition, in addition to uncivilized riding habits, damaged shared bicycles cannot be repaired in time.

On the one hand, relevant departments encourage cycling, but on the other hand, they do not set up enough bicycle lanes, which may increase the risk of cycling.

The phenomenon of riding with people is still very common/ Do you need a license to ride in the movie Sunny Days? ————————Today, the various “uncivilized performances” of some people on shared bicycles are not unprecedented “innovations”, but more like a kind of historical reappearance.

It can be said that in the 100 years since the introduction of bicycles into China, dangerous riding has always been concerned because it is difficult to eliminate it.

Xiao Qian, a famous writer in the Republic of China, wrote an article entitled “The Philosophy of Bicycles”, listing the various wonderful performances of cyclists at that time.

After getting on the bicycle, the clerk of the telegraph office said, “He knows that the police badge (traffic regulations) is for the weak, and the patrolman commands him with a wooden stick.

He will hit the stick together, and even the life of a 70 year old woman will be hanging under his wheel…” Does it seem familiar? In the early days of the founding of the People’s Republic of China, Hou Baolin, a crosstalk master, also had a piece of crosstalk called A Journey at Night, which satirized some uncivilized cyclists.

They didn’t listen to the police, didn’t obey the traffic rules, didn’t install lights or bells, and even dared to go on the road without repairing the brakes.

Finally, they had to “fall into the ditch with people and cars”.

One car for the whole family is the norm of Chinese families in the last era/ In the film Sunny Days, which shows the life of the children in the courtyard in the 1970s, the film Tangshan Earthquake shows that the adolescent junior high school students also like to show their bravery by riding with one hand or releasing the “big saber” with both hands.

This dangerous behavior is still followed by many people today.

However, in the long “pre bike sharing” era, the Chinese cycling career is not all a mess.

In some historical periods, in order to facilitate management and regulate traffic order, many places have issued the policy of “riding license”: cyclists need to be qualified before they can ride on the road.

People who ride on the road must carry their bicycle “driving license” with them.

Once the traffic police find that they do not have a riding license, they will be punished.

In the Republic of China, many places needed a riding permit to ride a bicycle on the road.

In today’s society, there are more and more shared means of transportation, such as sharing bicycles, sharing electric vehicles and even sharing balanced vehicles.

It is also becoming more and more convenient for people to ride bicycles on the road.

As the threshold is lowered, the level of chaos on the road is also increasing.. 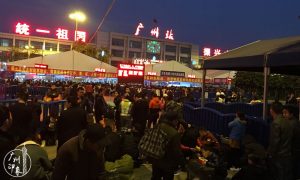 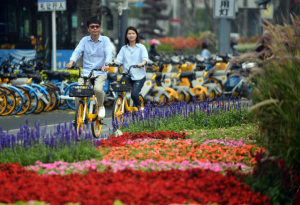 Meituan Bicycle Launches the Small Goal of “Reducing Carbon by One Person by One Ton”, which will reduce carbon by 25000 tons in the spring