Haishen village, as the hometown of Olympic cycling champion “Zhong angel”, naturally has riding elements in the process of rural ecotourism development.

In order to explore how Haishen village combines this unique advantage with rural tourism and create a more memorable and differentiated Haishen model.

The practice group of the school of management of Donghua University went to Haishen village on January 11 to truly experience the riding culture of Shanghai Township from the perspective of foreign tourists, so that Haishen can provide a better demonstration and reference for the economic development of traditional Chinese villages, and enable more people to re understand the countryside in the new era and Haishen in the new era.

There are many “riding track post stations” in Haishen.

There are cars for one person, two people, and some can sit a small doll in the middle, which is very interesting.

After renting bicycles, the members of the practice group rode around Haishen according to the map route.

On the way, land and villas flashed by; Looking around, you can see the subway slowly entering the station next to you and the children playing football in the one meter park at the end of the road.

Riding on the “field” of the countryside, the sight is broad and unimpeded, and the riding is stable and free.

Haishen in the riding meets the expectations of tourists for rural tourism.

Riding in the fields is free and fresh, peaceful and peaceful.

The team members after riding suddenly understand that this is the key to the characteristics of Haishen riding to attract tourists.

After riding, the members of the practice group take a group photo at the riding post station.

After riding, the members of the practice group return their bicycles orderly.

2 as the hometown of the Olympic Games, riding elements can be seen everywhere in Haishen.

Every few steps, the members of the practice group can see a characteristic symbol related to riding, including a small garden scene with the theme of bicycle movement and wall painting with the theme of racing competition, And small animals made from bicycle tires.

The members of the practice group found that behind these ubiquitous “little surprises” were the ingenious thinking of waste utilization.

Waste steel pipes, cans and hemp ropes were all raw materials for production.

Not only that, more than ten riding conferences around Pudong have been successfully held.

Haishen village has been taken as the starting and terminal station, and three riding routes related to Rural Revitalization have been designed, making riding a shining business card of Haishen.

Members of the practice group brainstorm and discuss the route.

Members of the practice group take a group photo with riding element markers in the village.

A house, a master and a story.

The team members carefully read the stories about angel Zhong and Haishen village in the honor room, discussed with each other and felt admiration.

In this small honor room, there is a great glory of angel Zhong’s life.

The honor room is not big.

Standing in the middle, you can see all the items on the wall.

The window is full of all kinds of gold medals and trophies.

All kinds of photos are pasted on the wall, including the life photos, training photos, competition photos of angel Zhong, as well as the group photos of the sports delegation, etc.

under each picture, there are written records of the achievements of the competition.

In front of the unique “honor wall”, there is a bicycle of Zhong angel, which seems to tell the legend of how Haishen village gave birth to Zhong angel and how Zhong Angel became an Olympic champion, adding details to the development of cycling tourism in Haishen village.

Looking around, you can feel the courage and perseverance of angel Zhong in pursuing his dreams.

Perhaps it is growing up in such a village with strong implementation ability that angel Zhong can defeat himself again and again, implement his efforts, become the Olympic champion riding a bicycle to the top of the world, and enable Haishen village to develop riding culture and realize two-way travel.

Press the switch of the light on the wall, and everyone walks out of the bell Angel honor room.

Looking back, there is a small building standing in the dark, but it seems to emit infinite warmth and shining light spots.

Members of the practice group continued their inspection tour of Haishen village and continued to walk on this land full of faith.

Through today’s activities, the members of the practice group deeply felt the charm of Haishen village in terms of natural scenery and humanistic feelings. 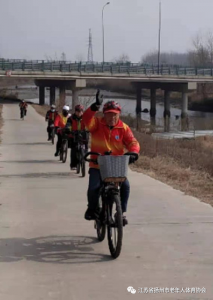