For a long time, riding to Tibet has always been a cool thing, but some people are unwilling to ride without attention, so they bring their pet kittens who usually hide at home and don’t step out of the door.

Two days ago, I saw a netizen discussing two bloggers riding the Sichuan Tibet line with cats in Douban.

The kitten is a fat English short gold layer.

Two bloggers are sending the kitten’s trip to Tibet.

According to one blogger, they are a riding team.

Every time they go to a city, they punch in and take pictures with their cats.

On the road, the kitten is often tied up in the back seat of the male blogger’s bike, and the female blogger takes photos in the back.

Sometimes the kitten squats on the back of the bike.

Sometimes I lie on the back of my bike.

As for how to solve the problems of eating, drinking and sleeping of kittens, bloggers have only sent videos of kittens going to the bathroom in the hotel sink.

I also remind you to be careful with containers including wash basins when staying in hotels.

However, the words of netizens who cared about kittens were all rejected by the two bloggers.

Some people said that the kitten suffered too much in the wind and sun all day.

She asked netizens to care about stray cats and said that netizens were sour on them.

The netizen worried that the kitten would be thrown out when turning the corner.

She asked the other person: do you think it’s possible? How many days have you been riding? Netizens asked if the kitten wouldn’t be afraid? She turned back: I’m afraid it’s not afraid.

Netizens asked her to give the cat a helmet and pay attention to safety.

She said that cats are safer than people.

To tell you the truth, I really didn’t see how safe the little cat looked on the back seat of the bike.

It was a little unexpected.

The cat must be the first to be thrown out.

Some people say it’s OK to put a box for the cat.

He said: what about my 60 day trip luggage.

Therefore, the safety of the cat is not as important as his luggage.

The cat has a good sense of balance.

In fact, the cat is forced to adapt because it has to put its luggage and can’t nest the cat.

No wonder he said that cats were used to being abused by him.

Some people say that cats sleep normally for 17 hours a day.

Male bloggers refuse to go back: the standard is eight hours.

Have you slept normally for eight hours? When the netizen replies again, he asks others to do something meaningful.

What is meaningful? Do you earn traffic by cats? Some people say that cats have painful joints, while bloggers say that they are more ill at home.

Anyway, they are not brainless.

No matter what kind of care they care about kittens, they will suffer.

Because I like to ride with the cat to Tibet regardless of the life and death of the cat.

Because I like to ride with the cat regardless of whether netizens care about the kitten or not.

Later, some netizens directly accused them of this behavior and won more than 1000 likes at once, more than the blogger’s posts.

It can be seen that many people who really like small animals hate this behavior.

However, the most frustrating thing is that there are still many bloggers.

Some ride, some drive by themselves, and some take cats to Mount Everest base camp.

Some people asked what they could do when they climbed the mountain.

They replied: climbing is a lifetime commemoration.

It’s not in vain that they were born on earth.

People think so, and so do cats? The cat knows what is Memorial and what is Everest base camp.

Do you know the meaning? They don’t know.

They only know that the air is thin, cold and uncomfortable.

Of course, no matter what suggestions netizens put forward, bloggers and people who support them will always say: cats are not good; Cats are different from cats.

Some cats are brave; People’s own cats can’t take care of themselves? Yes, the cat is fine now, but it will be late when there is an accident.

Originally, Muppet cats and English short are both prone to heart disease.

Moreover, it is true that cats have different personalities from cats, but from the perspective of habits, cats are animals that need long sleep, like warm and timid.

Why should they be allowed to go against their nature and accept those torments? What’s the difference between bloggers who once forced husky to eat chili in order to attract attention? A sentence “dogs like to eat, cats like” can represent the wishes of small animals and earn traffic with peace of mind? I don’t know since when, more and more people rely on pets to attract attention on various platforms.

Once they let dogs eat chili, now they take cats to ride in Tibet.

Maybe there will be something in the future.

Moreover, we also see that it’s useless to care about small animals and reason with them.

Therefore, we must resist this behavior of relying on cats and dogs to attract attention.

Indifference is tantamount to connivance, and more people will imitate and more small animals will suffer! By / little red book / dy Mo’er, a dog whose neck is cut by a rope, asks for Yun Yang. 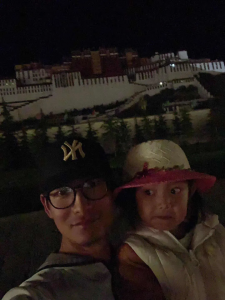 Post-90s dads ride Tibet with their 4-year-old daughter: what does a “rich” child look like?