Click the blue words to pay attention to “Civilized Beijing” in the sub center of Beijing.

Starting from the urban Green Heart Forest Park, you can ride past the canal wharf, enjoy the beautiful scenery along the Grand Canal, and enjoy the comfort of the autumn wind…

This is one of the routes favored by Gao Qingguo, a Beijing citizen.

“Cycling has become an indispensable part of my life.

I can feel the development and changes of the city when I ride in the urban area, and I can visit the natural beauty in the suburbs.

It not only exercises my body, relaxes my mood, but also makes many new friends,” said Gao Qingguo.

In recent years, cycling has become increasingly popular, with more and more activities and more participants.

It has become today’s “hot land for cycling” after the land for chemical plants has been vacated and new green has been planted.

Including this chemical plant, Beijing has withdrawn about 3000 general manufacturing and pollution enterprises in the past decade, and promoted two rounds of afforestation and greening of one million mu.

In the past decade, China has taken unprecedented measures to promote pollution prevention and control.

“The sky is blue, the water is clear, and the air is fresh.” This is Gao Qingguo’s greatest feeling of riding in the past decade.

The Action Plan for Comprehensive Traffic Control in Beijing in 2022 proposes that by the end of 2022, the proportion of green travel in the central urban area of Beijing will reach 74.6%.

During the “Fourteenth Five Year Plan” period, all roads with a width of 12 meters or more within the Fifth Ring Road in Beijing will be provided with bicycle lanes.

△ Citizens rode on the widened bicycle lane of the auxiliary road of the West Second Ring Road in Beijing (photographed on May 16, 2021).

Li Xin, a reporter from Xinhua News Agency, took a photo of the “riding craze” rising, which reflects the positive response of more and more people to the green and low-carbon lifestyle.

In 2021, the proportion of slow traffic trips in the central urban area of Beijing will reach 47.8%, a new high in the past decade.

Since this year, the number of bike sharing riders in Beijing alone has reached 601 million, and the average daily number of riders has exceeded 2.28 million.

The warm tip of civilized cycling is that the “riding craze” is warming up.

√ Be a participant in civilized riding.

Consciously enhance the awareness of civilized riding, start from yourself, abide by all traffic regulations, do not run the motorway, do not go against the road, do not rush the red light, ride on the right side of the road when there is no bicycle lane, cross the street and walk the zebra crossing, and yield to pedestrians.

√ Be a disseminator of civilized riding.

We should actively publicize the importance of civilized riding, strive to be the communicator and advocate of civilization, drive people around us with our own exemplary behavior, and spread civilization to every corner of the city.

√ Be the supervisor of civilized riding. 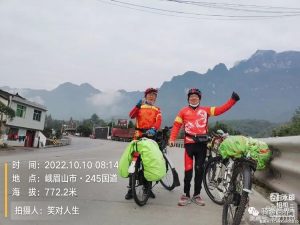 You should form these good habits when riding