On Wednesday, October 2, 2013, the first day of riding in Beijing was sunny and windy. 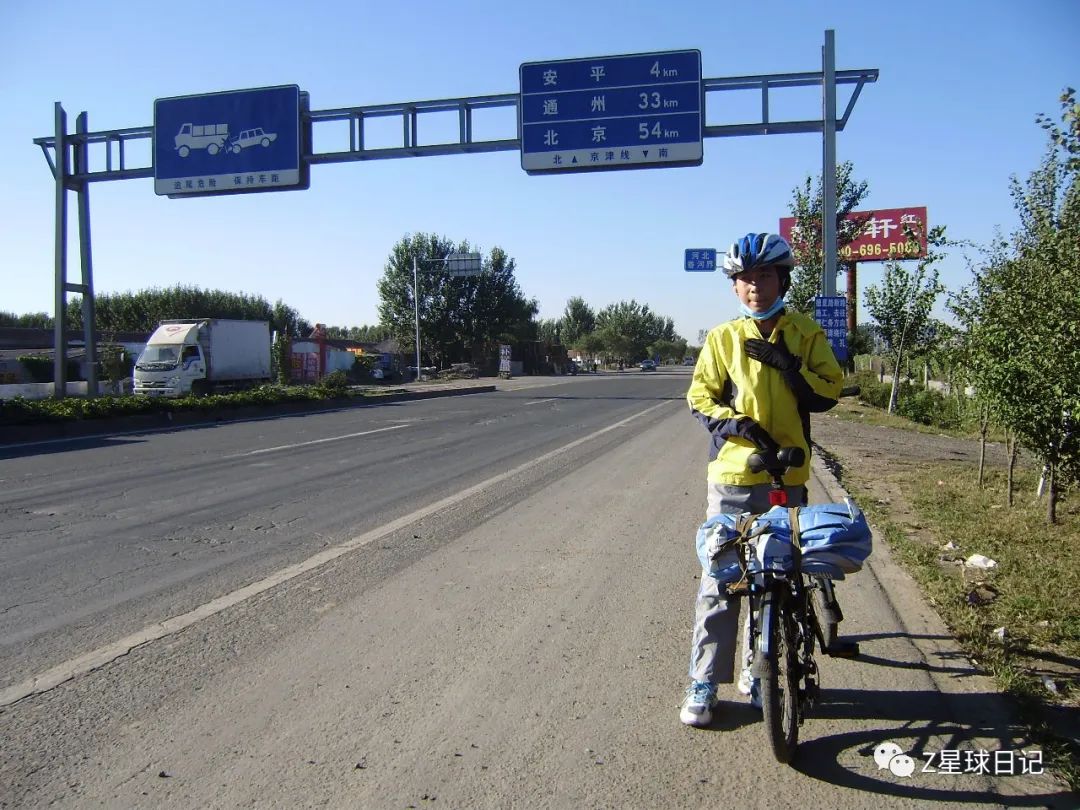 The originally planned riding in Beijing on October 1 was postponed for one day due to the light rain in Beijing and Tianjin. 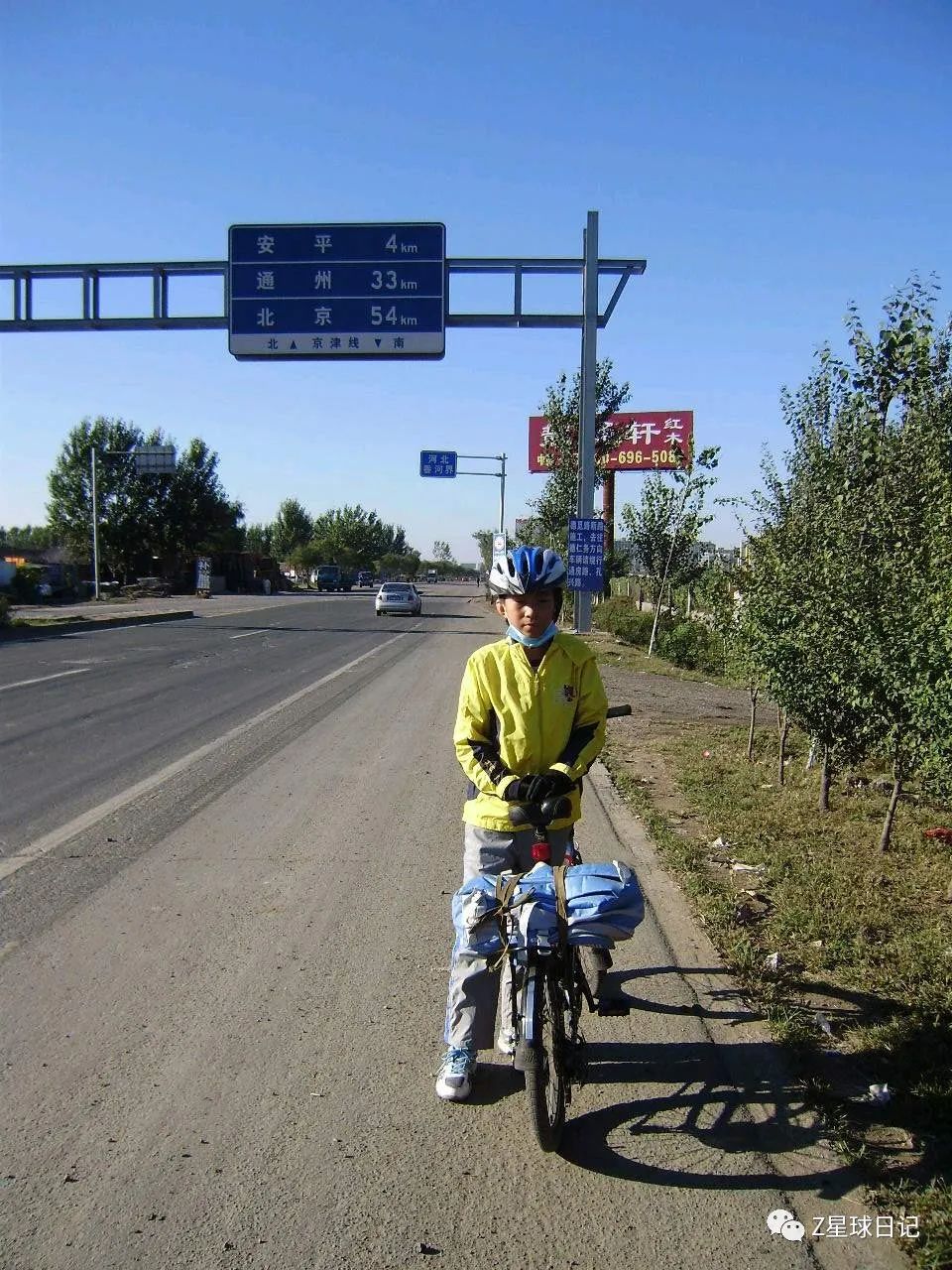 Like the previous cycling, He Chuan and I searched the best cycling route on the Internet. 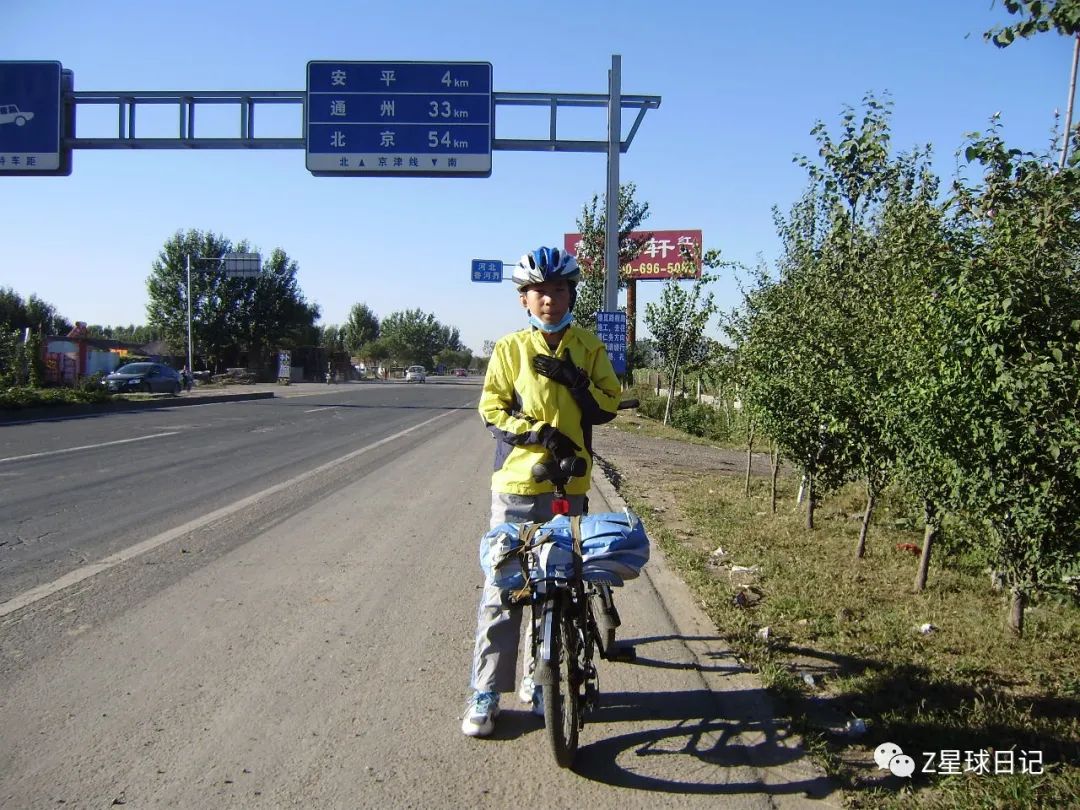 This time, the journey is long. 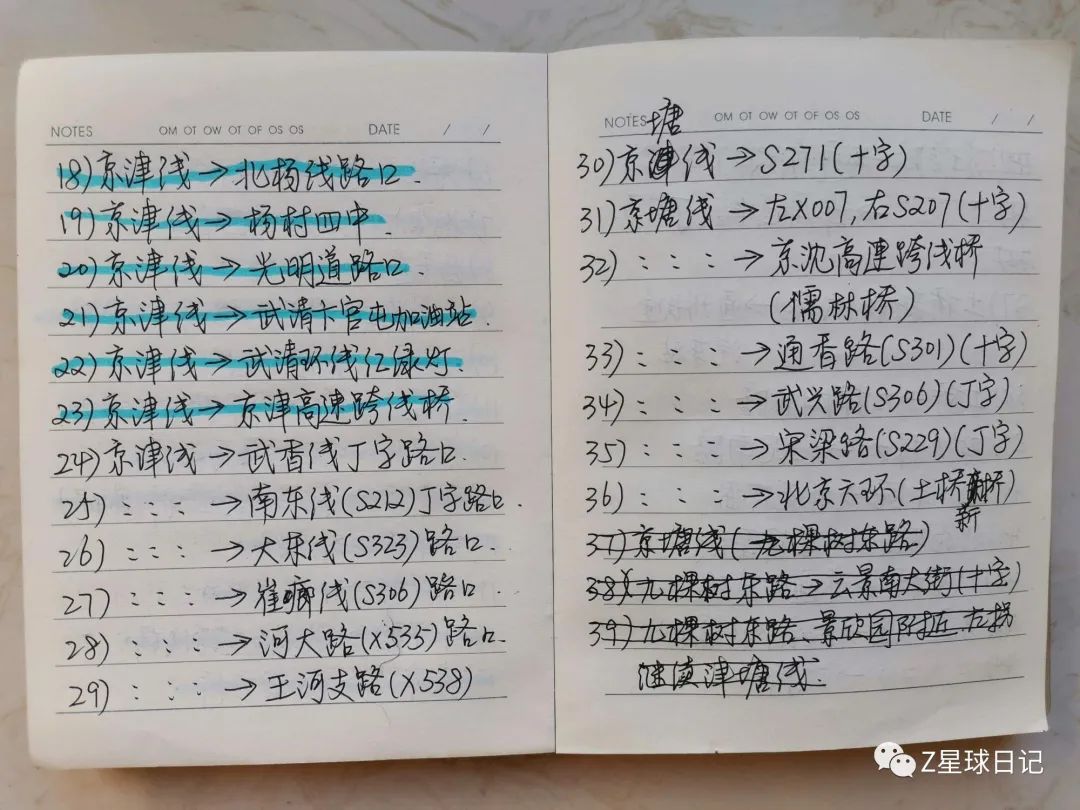 We divided the road map into 66 nodes from beginning to end. 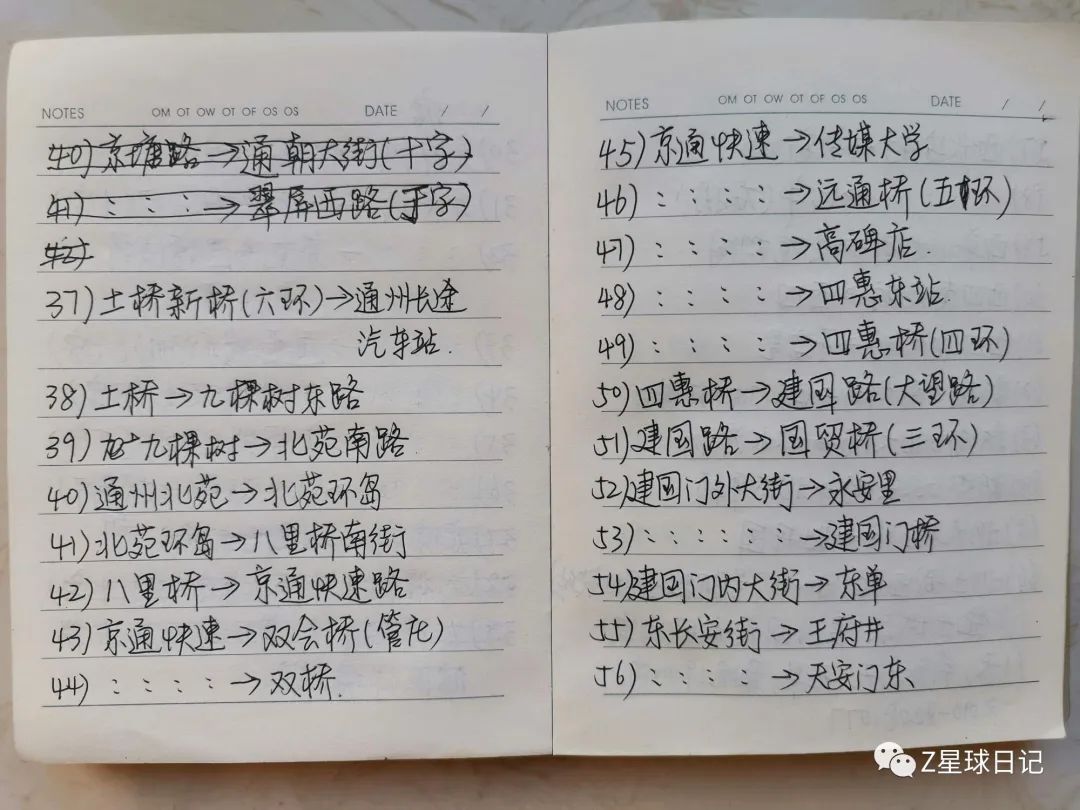 Every time you go through a section of the road, cross off the nodes you pass. 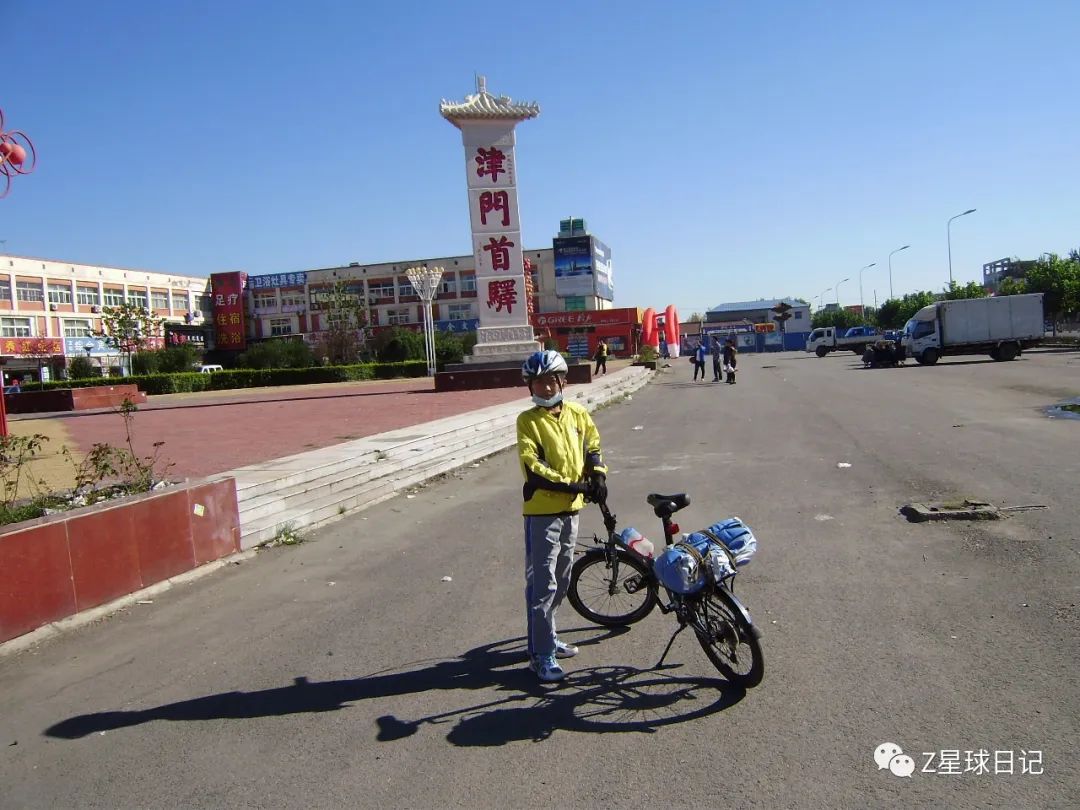 In this way, when 66 nodes are finished, the end point is reached. 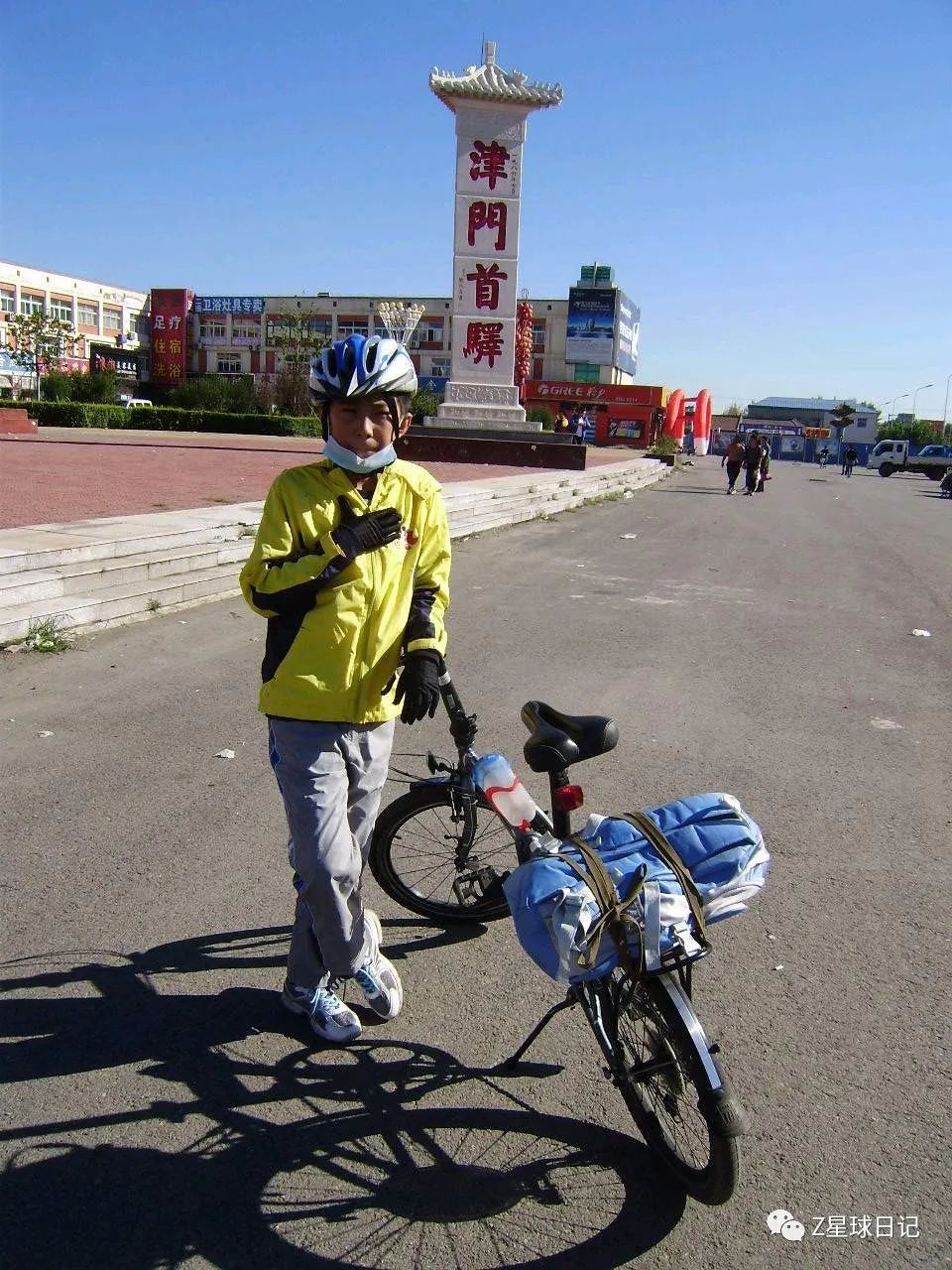 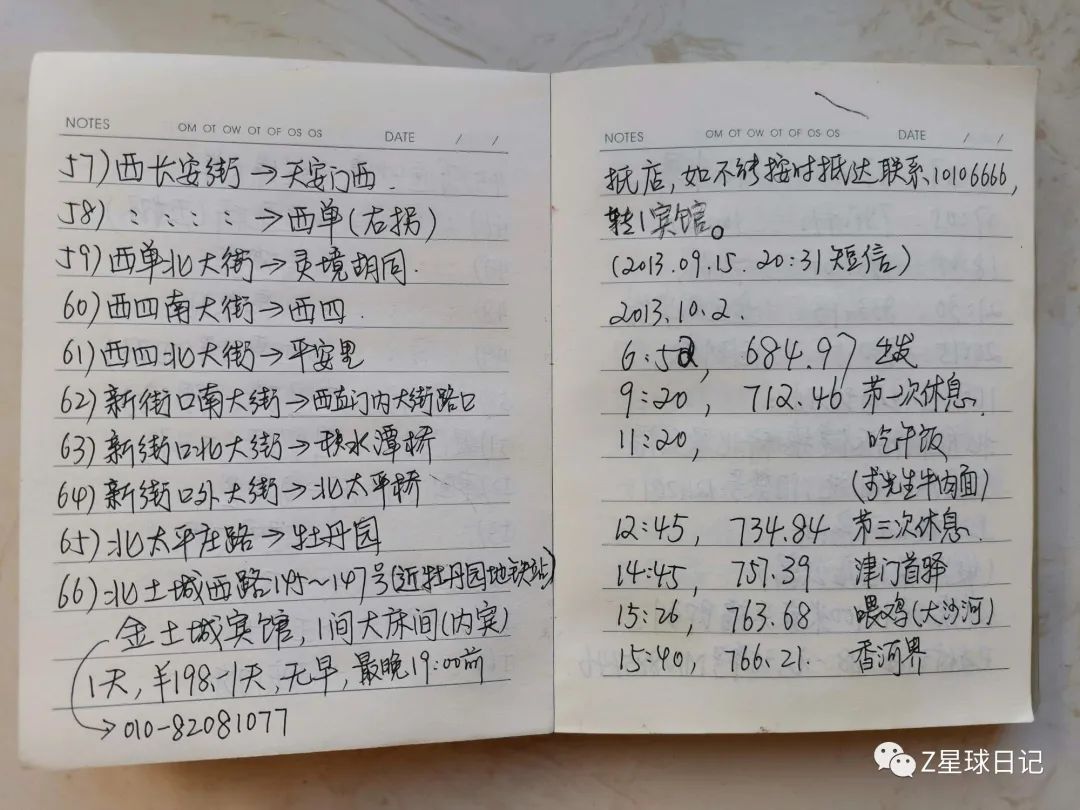 After breakfast, I packed my things and tied up my backpack. 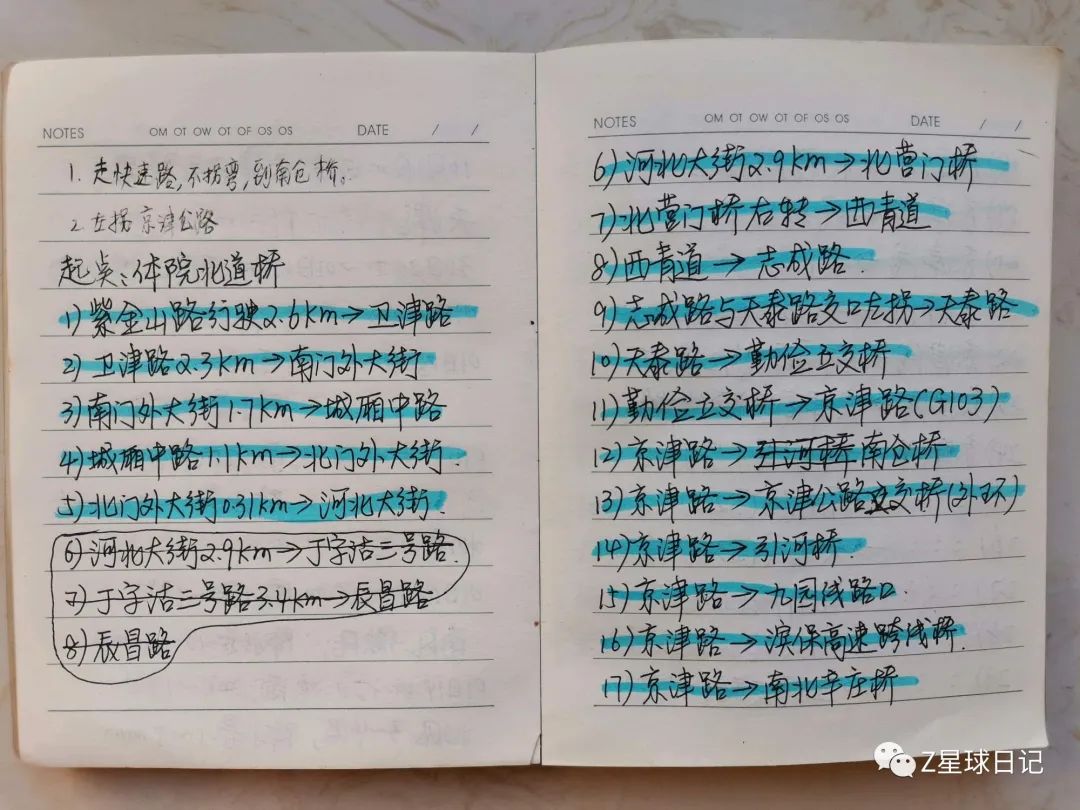 It was almost 7 o’clock and the sun was rising.

In the city, I haven’t felt much wind.

But outside the urban area, especially beyond the outer ring road, there are no tall buildings on the wide Beijing Tianjin highway, and the wind is getting stronger and stronger.

After riding for 27 kilometers, we had our first short rest.

Find a small intersection with the wind and the sun, eat some cucumbers and drink some water.

He Chuan called home and reported the departure to his mother.

Chuan’s mother was afraid of the wind, and He Chuan could not bear it.

She suggested that we ride to Wuqing and ride the harmony.

I asked if he Chuan could insist, and He Chuan said it was OK.

We continued to ride against the wind.

On the way, I saw a lot of cycling enthusiasts.

They were all riding official mountain bikes, which were much faster than us.

He Chuan comforted me half and comforted himself half: “they are all professional cyclists.

We are at most beginners in cycling, and our speed will definitely not catch up with them.” I also agreed with him: “yes, and they are all adults.

You are just under 12 years old and belong to minors.

You can’t compare with them.

When you grow up, you will definitely surpass them.” In the urban area, we can still maintain a speed of 15 kilometers.

But now, the speed has dropped to single digits, and even 9 can not be reached.

For a while, He Chuan even asked to come down and push.

I was also very worried.

I was afraid he Chuan could not stand it.

I kept asking him if he could persist.

Every time I hear he Chuan say “no problem”, I feel relieved.

I really hope he Chuan can persist.

We went in for lunch.

I ordered a bowl of beef noodles, and He Chuan ordered a fish flavored eggplant set meal.

Because of gout, I couldn’t eat beef.

I gave all the beef to He Chuan; He Chuan also kept giving me the eggplant in the bowl.

This is also the division of labor for small cold dishes: I eat kimchi, and He Chuan eats kelp silk.

After dinner, have a good rest, feel not tired, and continue to move forward.

In the Yangcun section, the Beijing Tianjin highway is well built.

There is a green belt between the motorway and the bicycle lane.

With the shelter of trees, the wind is much less on this section of the road, and we feel more relaxed.

After riding for 50 kilometers, we had a third rest as planned.

This time, the choice is under a highway overpass.

During the rest, we calculated the time and distance: in six hours, we rode 50 kilometers, which was only one third of the total distance.

I don’t know, but I was startled: at this speed, it is estimated that I will arrive at the hotel at 1:00 in the middle of the night.

Now, mother Chuan has set out from home to catch the train to Tianjin railway station.

Chuan Ma rode to Tianjin station first, then folded the car and got on the train; Arrive at Beijing South Railway Station before 3 o’clock, and then ride to the hotel to check in.

We need to speed up or we won’t be able to get to the hotel today.

Fortunately, at this time, the wind has decreased a little, not as strong as it was in the morning.

We arrived at the famous town of Tianjin: Hexiwu, the first post station of Jinmen.

Here, take a picture of He Chuan.

I told him the meaning of it.

Then, I bought two bottles of water in a small shop and went on without rest.

We stopped to have a rest.

In front of a waste collection yard, we saw several chickens and ducks.

He Chuan threw the leftover cucumber tail and orange peel to the chickens and ducks.

At first, the chickens and ducks used to peck a few bites, but later they were no longer fooled.

When he Chuan threw it again, the chickens and ducks hid in the yard.

Seeing the chickens and ducks scattered, we were ready to get on the bus.

At this time, a very ugly and thin hen came out of the gate of the courtyard and walked boldly past us.

He Chuan was surprised and pointed at it.

It’s not afraid of us at all.” When we rode on the bus and passed a garbage dump, the chicken was eating in the garbage dump.

He Chuan sighed: “look, this chicken is brave enough to eat delicious food.” When we continued to ride forward and saw the village name on the roadside: Dasha River, which still belonged to Hexiwu Town, He Chuan sighed: “how can we ride half the way and still not leave Tianjin!” ⑺ finally left Tianjin at 15:40, the code meter showed 766.21, and rode 81 kilometers.

He Chuan pointed to the road sign in front of him and shouted excitedly: “finally out of Tianjin, Dad, take a picture, Xianghe boundary.” Once entering the Xianghe river boundary, the pavement quality of Beijing Tianjin highway has obviously deteriorated.

Let’s give an analogy to the two kinds of roads: the Beijing Tianjin highway within Tianjin is like a piece of kraft paper; And the Xianghe river is very like rough sandpaper.

Riding in the tropics brings new opportunities to the industry

Yang Mi’s muscular legs are so charming that he is not afraid to wear riding pants. The method of “loosening up and tightening down” shows