The funds for protecting the market have come.

Because we pulled securities companies’ shares today, I think today’s rebound should be a combination of the funds for protecting the market and the funds for copying the bottom.

I guess I still want to try again to see if I can pull back 3000 points and continue to defend.

However, today’s rebound can only be said to be a weak one, not a strong one.

Ningde’s rise today also contributed to the rebound of the GEM, which was mainly stimulated by the announced good performance.

Today, A-shares can rebound, but the protection is still quite obvious.

In fact, they have fallen to the current price, and there is no suspense about default…

I don’t think it is important to continue to fall.

On the panel, the power sector set off a rising tide.

Recently, the General Office of the National Development and Reform Commission and the General Department of the National Energy Administration issued the 14th Five Year Plan Guidance on the Implementation of the Rural Power Grid Consolidation and Improvement Project (Draft for Comments).

Affected by this, power equipment, public utilities and other industries were among the top gainers, and 9 concept stocks, including Far East Shares, Golden Dragon Feather, and Weike Technology, rose by a collective limit.

The fourth quarter is the traditional energy peak season.

The weather is getting cooler and the demand for heating and electricity will remain strong.

Winter is coming soon, Hou said that the La Nina event will still affect China’s winter climate, when the coal and power sectors will usher in a peak.

The shortage of electricity in the third quarter was mainly restricted by the drought in the Yangtze River basin, which led to the shortage of hydropower output.

Under the normal supply guarantee measures, the coal consumption of thermal power was better.

Under the expectation of high power demand in the fourth quarter, the profitability of the thermal power industry is expected to continue to improve.

Therefore, there was limited downward space after the market fell below 3000.

Although the bottoming and rebound on Tuesday was not significant for the big level, a small center has been built at the 1-minute level, and this center is an upward structure, with a range of 2970-2985 points, That is to say, the index breaks through the central track first, and then confirms it with three purchases, so the low point of the short-term line can be basically achieved.

Cyclists hope that you can form the good habit of looking good after reading.

If my analysis benefits you, you don’t need any return or appreciation, just want to share the circle of friends, thank you very much!.. 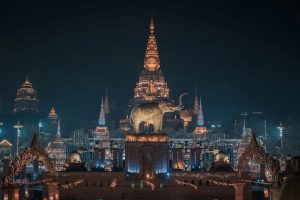 New South Yunnan Riding | Xishuangbanna, where half of the entertainment circle is located, feels the south of colorful clouds with wheels

Sign up! “Dubai Cycling” will turn Sheikh Zayed Road into a giant bicycle lane on November 6