If you don’t want to travel far on this National Day, you might as well start a “wind breaking” trip in Chengdu – this issue of the inspiration library.

We talked about five Chengdu cycling clubs and their stories about riding friends.

Among them, there are old cycling clubs that have been rooted for more than ten years; There is a cycling family loved by three generations, and a cycling+community that is leading the most “trendy” in Chengdu; Someone has won the championship in many international competitions; Some people travel around the world with “Dead Fly” on their shoulders…

These clubs have different riding styles, but they also have the same love for cycling for many years.

What cycling phenomena and trends have they observed over the years? How can they lead more people to love riding? By the way, this time they will also recommend 8 customized theme cycling routes, covering different difficulties such as junior, intermediate or senior level, urban leisure, landscape clock in, hydrophilic routes, climbing routes and other theme styles.

Come on, put on your helmet and let’s ride together.

c ⻘ Creative Community, which is not serious about cycling, wants to step into the cycling circle.

You must first understand the most popular bicycle, Brompton “small cloth”.

It is very popular in the circle because of its rich color matching and clever folding style.

c There is a shop selling small cloth in the creative community of 028.

c ⻘⻘⻘⻘⻘⻘⻘⻘⻘⻘⻘⻘⻘⻘⻘⻘⻘⻘⻘119; The tools bought by the shopkeeper are neatly displayed in the workshop, which satisfies the imagination of everyone who loves to do modification.

As early as July this year, they started the “atypical cycling activity”.

Before that, they had also ridden the Jinniu Red Bicycle Sima Ancient Monument Line, Qingyang Ancient Waterfront Line, and the Old Four City Gate Night Riding in the Qing Dynasty.

c provides “I usually ride around Kaka Corner in Chengdu.

If I encounter interesting alleys or landscapes, I will write them down.

c provides information about stepping on the line, introduced by Mr.

Guo, “The process is to determine the general direction first.

Ride the West Gate or the East Gate.

The East Gate is an old industrial base with cool traces of industrial history.

The historical needle will move forward on this route, so that you can capture the general appearance of that era when you ride this route as much as possible.

Each route will be tested internally for 2-3 times, Set up rest points and photo taking points, calculate the mileage and route time.

Compared with ordinary riding, we were right not to ride seriously.

c Teacher Guo believes that busy work can sometimes make us feel strange and distant from the scenery around us.

They hope that through atypical cycling, people can have more perspectives to appreciate the city, so that the things they were familiar with can have new meaning and expand our “neighborhood”.

c As Chengdu has built more and more cycling roads, the development of the cycling industry is getting better and better.

c All cyclists are open and free.

After each ride, they are always reluctant to leave.

They sit in the community to have a drink, play games, take a rest and relax like they are at home with friends.

They have also done a switch contest, “We just think we have to play together”.

C Total mileage: about 15 kilometers Total time: about 1 hour Recommended reason: ride along the Jinjiang River to experience the alternation of new and old Chengdu.

There are several parks and mobile coffee trucks along the way, as well as historical sites, Suitable for urban leisure riding players.

Precautions: The daily riding safety factor is high, sharing bikes is friendly, and some sections of the night riding are dark.

It is recommended to wear helmets and night lights.

You will feel that the city is changing, and the old Chengdu is still the same, which is suitable for tourists and urban leisure riding players.

Precautions: In some sections, there are many cars with narrow roads and high safety factor for riding in the daytime.

It is recommended to wear helmets and night lights to share bikes friendly. 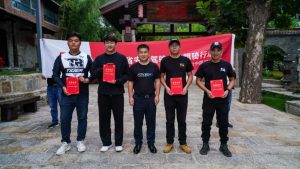 European cycling: where can we meet in life