These strange rocks are not pulled from other places and placed here, nor are they deliberately carved.

They are local “native” stones, which are naturally created by the unique geographical environment.

Recently, a small scenic spot has been developed for tourists to visit.

Every day, tourists come to appreciate the strange rocks in an endless stream.

At the beginning of last year, I heard that there was a “stone forest” in Dongshan Village.

At that time, when I was riding Chenlushi Horse Mountain, I went to Dongshan Village to look for it, but I didn’t find it because of time.

Recently, I saw many photos of Tongchuan cyclists riding in Dongshan Stone Forest, so I wanted to take advantage of the weekend holiday to ride again to see what happened.

From Caocan Town, slowly go up the slope along S209 Road to Didian Village.

Starting from Didian, I entered the Chenlupan Mountain Highway on the mountain, and passed a small temple on the roadside on the way up the slope.

This temple had existed before, but it was so old that people thought it was abandoned long ago, so I never visited it.

Now it seems that it has been renovated, and even the weedy path in front of the temple has been reopened, so I went to visit it with curiosity.

I saw a general enshrined in the locked door of the temple.

I don’t know if it is Guandi Temple.

There is a stone kiln behind the small temple.

The bend where the temple is located is the best scenic spot overlooking the winding mountain road at the foot of the mountain.

I haven’t ridden this road for a long time.

I don’t know when a wind turbine has been installed on the top of the mountain.

After replenishing water at Shangdian Village on the top of the mountain, continue to ride towards Chenlu Town.

3 kilometers later, you will reach the intersection of Chenlu Town, turn right to Chenlu Ancient Town, and go straight to Shima Mountain.

Go up the slope along the straight line and build a “Juntailing Wind Farm” on the slope, which is a new building that has not been built before.

About 1.7km from the intersection of Chenlu Town, you will encounter another fork.

Turn left and go up the slope to Dongshan Village, and turn right to the site slope.

Ride along the left turn line for 1.4 kilometers and then arrive at the front of the Dongshan Village Committee.

There is a fork in the road.

Do you want to go down the north slope on the opposite side of the road or continue to turn south along the main road? Since there is no signpost of “Qishiyuan” on the road, many people will go down the opposite cement road to the village to inquire.

In fact, you should continue to turn along the main road, and you will encounter a three-way intersection when you travel about 300 meters.

Turn left at this intersection and go downhill to enter the village.

When you go downhill, you can see a large parking lot under the left side of the hill.

The Stone Garden is on the hillside below this parking lot.

There is a landscape stone in front of the parking lot with the words “Chen Furnace Stone Garden” written on it.

There is a public toilet nearby.

Walk along the cement road in the middle of the parking lot to the end and then go down the slope to see the Stone Garden below.

At present, it is a small scenic spot free of charge.

Several pavilions, winding paths and street lamps have been built, which looks like an ordinary leisure square in the village.

Down the path of the park to the hillside, there seems to be no difference.

However, when we walked along the flagstone road and carefully looked at the strange rocks along the road, we found that these “masterpieces” of nature are really unusual.

They have no traces of artificial carving, but they have different shapes.

After seeing them, we really felt inconceivable and could not imagine how nature formed these strange rocks.

Can you imagine how the huge stone with holes running through the stone body was formed? This huge stone attracted bees to build a giant hive here, which shows that the geomancy here is good.

Is this the proof that water wears away stone? The grotesque rocks in the Stone Garden are jagged.

You can think of each grotesque rock as a living thing by using your imagination.

It will be interesting to visit again.

If you think it is just a lifeless stone, maybe this place will let you down.

After visiting the Strange Stone Garden, return to the intersection to Lidipo, and then ride towards Lidipo Village.

Lidipo village is also an ancient village with a history of firing porcelain for thousands of years.

We made a special trip to visit it a few years ago.

For details, please refer to the previous article of this official account at the end of the article.

Ride westward from Lidipo Village along the cement road, and pass through Zao Village and Haokou Village to An Village.

According to the signs, there is a fort site and a Medicine King Temple in An Village, so we turned in to visit.

An ancient locust tree over 300 years old at the intersection of Ancun.

In front of the Ancun Fort site stands the stone tablet of “the former site of the mobilization of the masses by the Second Front Army of the Chinese Workers’ and Peasants’ Red Army”.

The inscription introduces: From February to March 1937, He Long led the Second Front Army of the Chinese Workers’ and Peasants’ Red Army to Chenlu, and sent several teams to spread revolutionary principles, publicize anti Japanese propositions, and mobilize the people to fight against Japan.

The Anyang Fort in Huangbao is an important place for the Red Army to carry out propaganda activities.

According to the investigation, this Anyang Castle was built from the Yuan Dynasty to the Ming Dynasty.

It seems to have been rebuilt in the Qing Dynasty.

It is located in the northeast corner of Ancun Village.

The castle is divided into two castles, the east and the west.

The city walls and gates are well preserved.

It is a relatively complete ancient castle in Weibei area.

The gates and walls.

The three characters “Anyang Castle” are carved on the forehead of the city gate, and the “Yang” in the middle is missing.

There are two gates in the gate hole.

The castle is dilapidated, the grass is taller than people, and nobody lives in it.

The Medicine King Temple in the village, built in the Qing Dynasty, is located in the north of An Village, facing south, with three houses on both sides of the hard mountain.

At a place called Huaimiao, we found an ancient locust tree beside the road.

It seems that the tree should be hundreds of years old.

It is still luxuriant and bears clusters of fruits.. 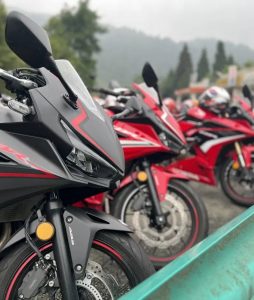