In December 2021, Xi’an was closed, the second city with a population of 10 million after Wuhan.

The important task of ensuring the life of 13 million Xi’an citizens living in isolation falls on the shoulders of every retailer.

All Yonghui people in Shaanxi overcome all difficulties, bravely retrograde, and contribute their part to the victory of this battle in their own posts.

On the eve of the new year in 2022, it was supposed to be a time to get together with his family.

The employees of the platform and other stores immediately went to the logistics park in Chang’an District to support District 2.

In order to ensure the delivery of 40000 materials within three days, the partners assembled 5000 material packages overnight, although it was very hard, But Yonghui partners took pains to stick to the front line of the campaign.

They are the most beautiful “rebels”.

Let’s walk into some of the partners and praise them! Instant noodles are meals and storerooms are beds.

Shi Yang, the small e-commerce store manager of Longhu store in Qujiang, Shaanxi Province, competes against the clock to ensure the supply.

When the whole city of Xi’an epidemic was sealed, e-commerce online continued to explode orders.

Facing the problem of community blockade, employees could not get out and no distribution, he led two partners to stick to their posts, instant noodles are meals and storerooms are beds, and competed against the clock to complete goods collection, replenishment and community distribution; At the end of the day, he walked more than 50000 steps.

His work clothes were soaked with sweat and stuck tightly to his body.

His glasses were damaged during replenishment and there was no place to repair.

Once the tape was tied, he continued to work; Despite his small body, he contains great energy.

When asked why this partner of 99 years worked so hard, he said: “the responsibility is on my shoulder, I must hold on!” For everyone, she Xiaojia sticks to her original intention and mission.

Chang Jiyan, a partner of Shaanxi Fangwei Road vegetable store, is out of town.

She planned to go home to visit her relatives during the new year’s Day holiday, but when she learned that some colleagues affected by the closure could not arrive at the post, she took the initiative to refund the ticket, give up the vacation plan, and participated in the fight against epidemic prevention and control at the first time.

As an important post for ensuring supply and stabilizing prices, the small vegetable store has a great responsibility.

When many partners in the small store are unable to arrive at the post, she leads the employees to actively fight and helps the government put in love vegetable bags.

In the most difficult days, she insists on fighting on the front line for half a month! The urging voice is warm.

Zhang Zhenxing, the small fruit store manager of Shanglin Road store in Shaanxi, has been responsible for distribution during the closure of the store, and took the initiative to drive out the tricycle at home to help everyone solve the problem of difficult distribution.

He bicycles to each community to distribute materials every day, and his busy figure can be seen in every street.

What he says most is: “hurry up, hurry up, we hurry to deliver goods”.

When we hear his urging language, we will not feel wordy, but feel the warmth behind the anxiety.

Riding for four hours is only to fight the “epidemic” side by side with his partners.

Gao fangru, an employee of the vegetable shop on the South Road of Shaanxi Park, has spent more than 20 days since Xi’an was closed.

Due to the shutdown of public transportation, it takes nearly four hours to ride a bike to and from work every day; She took great pains.

The first thing she did when she arrived at the store in the morning was to help prepare goods online and help the community deliver materials; During the epidemic period, she insisted on her post for more than 20 days without hesitation, and there was no complaint from morning to night.

Once the shopkeeper asked her, “aren’t you tired?” she smiled and said, “it doesn’t matter.

It’s worth working hard to do what you can.”.

It is such an ordinary person who shines on his ordinary post! Yan Shaoxing, the store manager of Shaanxi hi tech store, takes the store as his home and serves the “family”.

In the face of the closure of Xi’an city and the control of the community and traffic, in order to ensure the livelihood of the surrounding communities and stores, he directly lives in the store.

His office is covered with paper and cotton coats, and takes the store as his home.

When the travel of store employees is blocked, he timely coordinates with government departments to apply for passes, so as to strive for more employees to come to the post to ensure the supply of people’s livelihood; In the case of continuous physical fatigue, I don’t forget to care for employees and cook for employees in person to ensure that everyone eats hot meals in cold winter.

From January 11 to 15, 2022, the newly confirmed cases in Xi’an were only single digits for five consecutive days.

The war without gunpowder smoke for 24 days is about to usher in the dawn of victory.

There are no heroes from the sky, only mortals who stand up.

Let’s praise our partners in the front line of the fight against the epidemic!.. 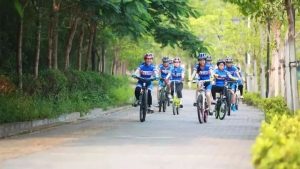 Cycling is the most valuable form of exercise 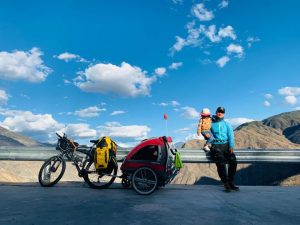