How many degrees can you climb? This is a topic that is easy to cause cattle hide to connect with each other.

Today, we will work with Rhett Allen, a physics professor from the University of Louisiana in the southeast of the United States, to figure out what the extreme degree of bicycle climbing is.

First of all, let’s look at the definition of slope.

Slope is the degree of gradient per unit of the surface.

Generally, the ratio of the vertical height h and the horizontal distance l of the slope surface is called slope i.

Percentage and degree are both expressions of slope.

Take a car picture to feel it.

How steep a slope you can climb does not depend on the power.

“If you don’t care about the climbing speed, such as a few meters per second, you can climb continuously with very little friction.

It’s like lifting a heavy object with a pulley, in fact, you only need a motor with very small power.” Rhett Allain is a professor of physics at the University of Louisiana in southeast America.

He has his own physics science column on Wired magazine.

In theory, as long as a suitable gear ratio is found, a small power is enough to maintain climbing.

However, the reality is merciless.

A small gear ratio means that the driver needs to rotate his legs crazily to maintain a high pedal frequency, and he will fall down if he is not careful.

Then, he carried out extremely complicated calculations in a very professional physical way, and finally concluded that the 40% gradient is the maximum gradient that a bicycle can challenge.

At this time, 422 watts of work is required, which is the power value that a professional cyclist can almost reach.

If you want to drill a cow’s horn like me, and you want to see how much power we output and how the transmission ratio of the bike is when the slope reaches, we can’t go up another meter.

The heart of gravity becomes a key word.

The only thing you can’t surmount is the center of gravity.

A common sense is that when the slope is steep to a certain extent, we will fall back.

And where is the rider’s center of gravity? Keith Bontrager, an elite Bikefitting technician, said that it was really difficult to explain this from a conceptual perspective, but he generally set the center of gravity at 3 to 4 cm behind the foot when the crank on the side of the dental disc was at the nine o’clock position.

Of course, this is the case when the driver has been sitting on the seat during the climbing.

When the angle becomes steep, we can’t help but leave the cushion and take two steps.

If the center of gravity of the standing rocking car is recalculated, a new critical point of 41 °, or 86.9%, will be obtained.

It seems that cyclists can even conquer every cliff that makes cross-country jeeps look shameful.

However, in this group of calculations, the friction between the tire and the ground is significantly less considered.

People who drive often understand that when the gradient is too steep, the tires will slip, and bicycles are no exception.

He said frankly that when climbing steep slopes, the tire friction would be the first to fail.

“You really can never tell the friction coefficient of a complex compound like rubber, whether it is dry, whether it is wet, how dry it is, how wet it is…

After incorporating his complex formula, the tire friction can only support climbing to 38.7 °, that is, about 80% of the gradient.

However, the estimate of 0.8 is always optimistic.

Considering that in road construction, 30% of the ramps are made of concrete rather than asphalt macadam roads, and the friction coefficient of rubber will drop to 0.6 during movement, the slope obtained by applying Professor Alan’s formula is about 60%.

When you are confident that you have enough power, proper scale and extraordinary center of gravity control, you will still be defeated by 60% steep slopes, because your tires will sell you, unless you always have a bottle of 502 in your cycling clothes..

Get applause for riding, and guard will become a “police”! Chizhou Public Security Guard the “Wanmei Mountains and Rivers” Cycling Race 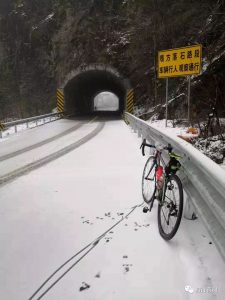 Please remember these 3 points when riding!