This is the first stop for the Red Army to enter Ganzi area.

The ancient town has gone through many vicissitudes, telling the story of time! On the other hand, angel followed Professor Wang and the guide Mr.

The glacier tongue started from the big ice waterfall, like a long tongue, passed through the cliffs on both sides, and reached the emerald virgin forest.

The cloud shrouded and foggy place in the distance is Hailuogou No.

You can feel the natural change of “four seasons in one ditch and different days in ten miles” in this heaven and earth.

Hailuo Valley is shrouded in clouds on a cloudy day.

The largest hongshitan group makes people sigh the magic of nature! Although I didn’t see Rizhao Jinshan, it was not in vain.

It is said that there is a “garbage” bank in Hailuogou, which saves only garbage instead of money.

Tourists will send the garbage to the designated place, and then give corresponding prizes according to certain standards to praise this environmental protection concept.

The former Hailuo Valley has a larger modern glacier.

Due to global warming, Hailuo Valley is also “slimming down”.

We call on everyone to protect the environment and save resources.

Only in this way can we leave these natural beauty.

We ride through Luding and Kangding to Yajiang.

My little brother Xujie learned it.

Although he could only say “ouch, ouch, hey”, it was not bad.

To get the “intangible cultural heritage” back to life, he not only felt the charm of national culture, but also saw the happy life of the villagers of Funi.

This is a scenery you can’t see in Lhasa by plane.

When we just rode into Luding, we were shocked by the majestic Dadu River.

The rolling river and the roads on the cliffs.

Luding is a county built on such a torrent.

Luding Bridge, built in the Kangxi period of the Qing Dynasty, is an ancient bridge with a long history.

At that time, the Red Army took 22 warriors as the vanguard and captured the Luding Bridge, writing an immortal chapter in modern Chinese history.

We went to Luding Bridge, listened to the red story again, and experienced the difficulties and dangers of the Red Army during the long march.

From books to reality, it was of great significance to us.

Many netizens live “riding in China” and “cloud” punch in Luding Bridge to feel the red culture, understand that victory is hard won, and cherish today’s happy life.

The whole section of G318 Sichuan Tibet line is like a roller coaster.

It not only crosses mountains, but also many rivers.

Look, the Dadu River and Taotao River in the distance rush eastward.

“Riding in China” feels the beauty of non repetition along the way, and each scenery makes us intoxicated.

The Knights took a short rest, moved on from low altitude to high altitude, and rode on the love song Avenue in Kangding.

“On a rolling mountain, a rolling cloud” was more appropriate to sing the love song of Kangding at this time.

The Knights crossed one pass after another, and the zhedo mountain shrouded in clouds was right in front of them.

The pass, with an altitude of 4298 meters, was the first high mountain pass on the Sichuan Tibet line that needed to cross mountains.

The beautiful scenery of the cloud sea was quite a fairyland, No wonder it has the reputation of “the first pass of Kangba”.

Tomorrow is the eighth day of “riding in China”. 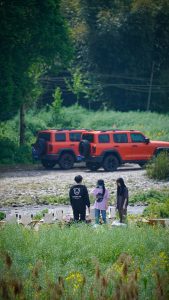