This is the diary of Feiyue’s last two days of meditation riding in August 17. 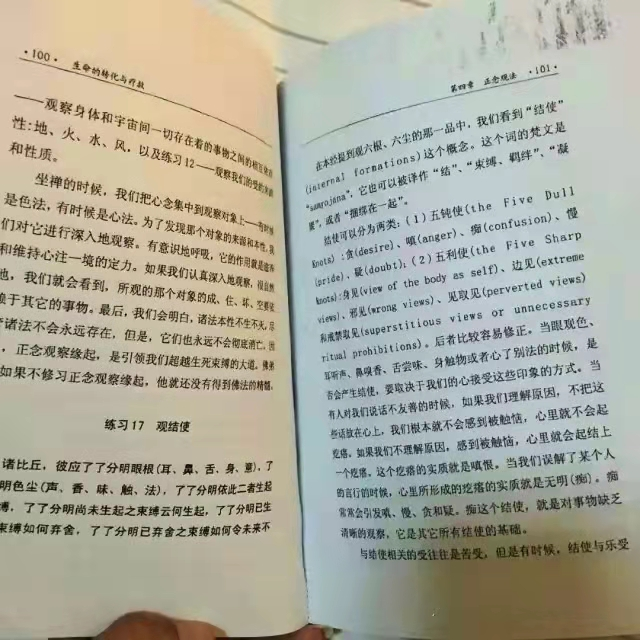 Meditation cycling is really worth participating in.

Especially when you are physically and mentally tired, when you can’t open your heart knot, when you can’t get beyond yourself and want to break through Participating in meditation and cycling will surely make you meet a better self. 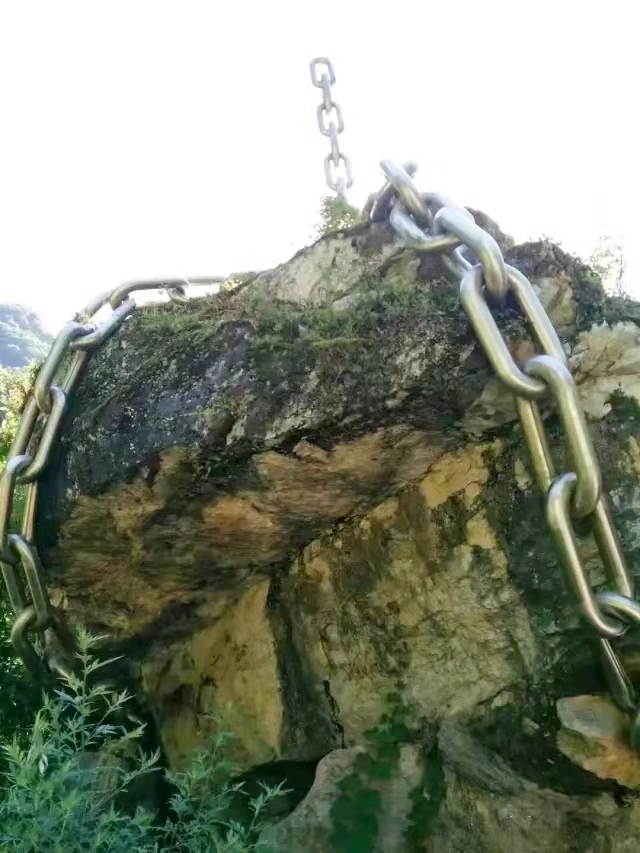 On the fourth day, I stayed in Nanyang for two days and began to return to Muyu’s blue sky robe today. 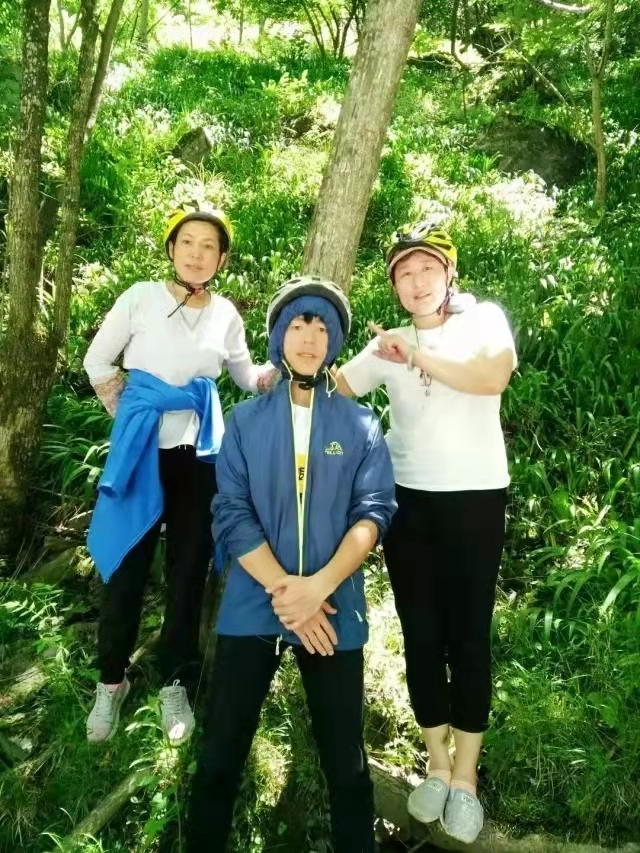 At the beginning, I only wore a short sleeve and rode for 500 meters. 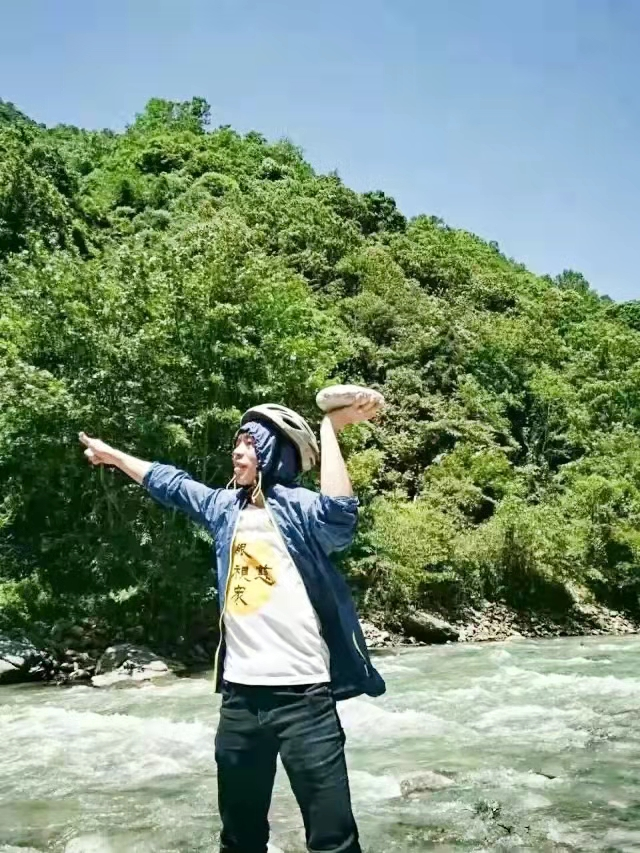 I quickly turned around and went back to wear my coat. 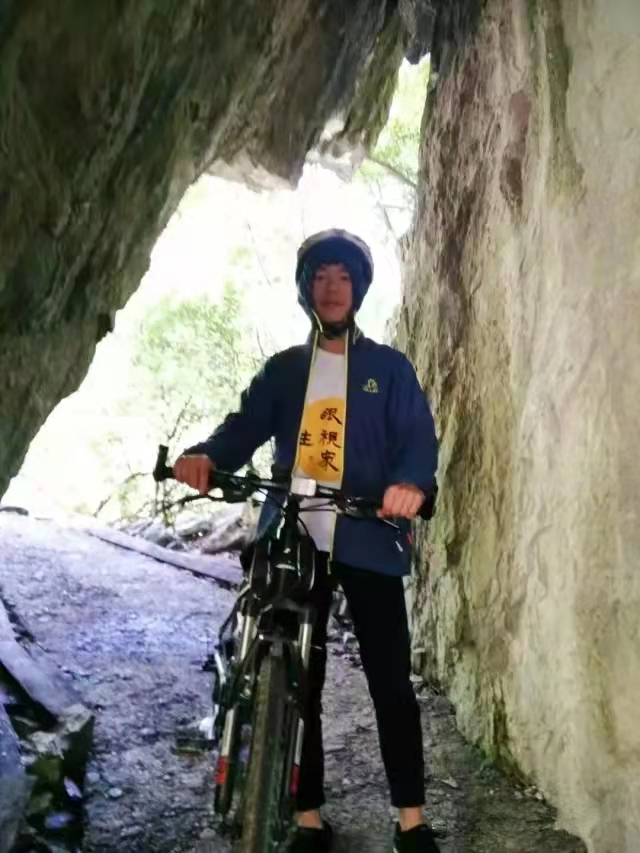 The wind in the valley was so strong that I was cool. 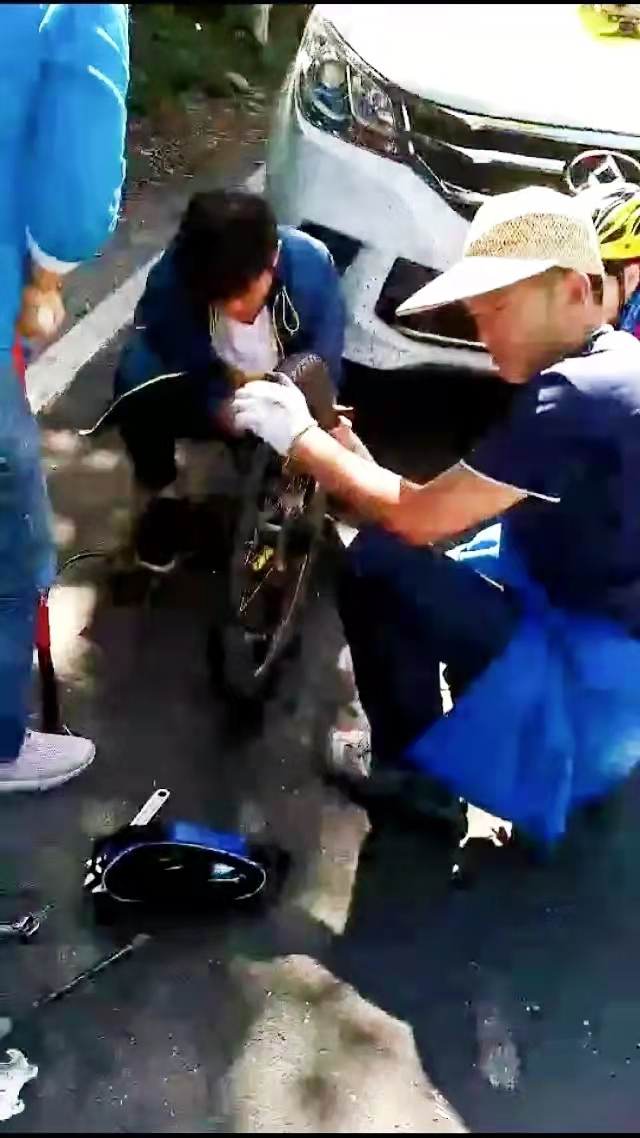 The return journey is basically flat road and gentle slope, which is not as physical as climbing, so the mentality is relatively relaxed. 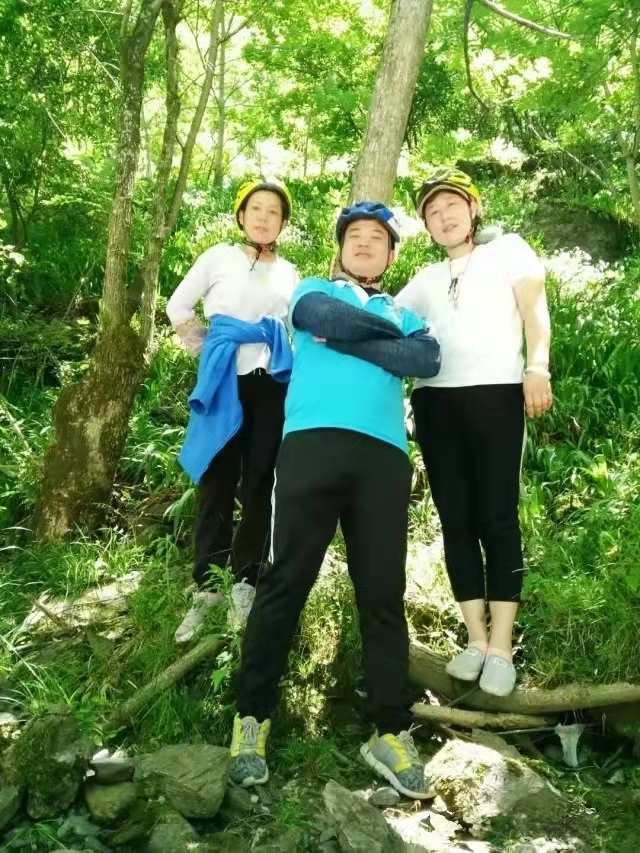 When we got to the viewing platform, elder martial brother Zhiyuan’s tire was pierced by a small iron wire.

Fortunately, we ensured that the car had a spare tire, and the tire was changed in a short time. 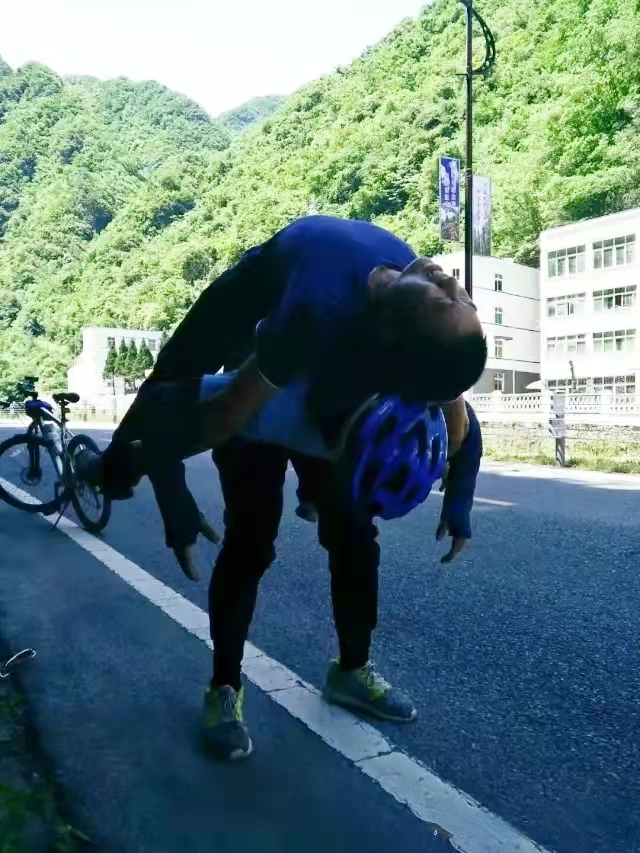 This is the viewing platform ▼ after mending the tire, I ran ahead and caught up with senior brother Wang Dong, senior brother Miaoyu Qingxin and the hostess of our hotel in about half an hour. 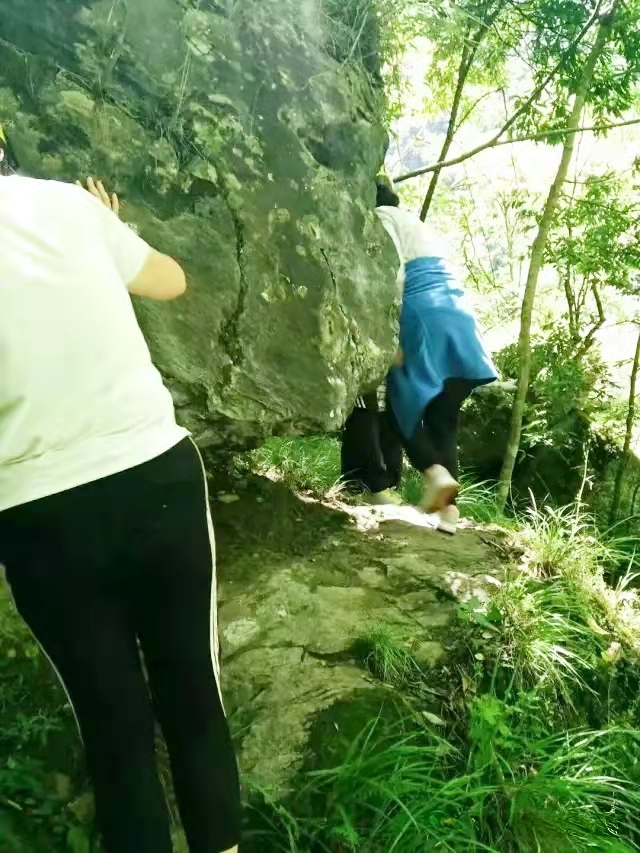 The landlady joined our team temporarily.

She only rode with me for two days and said she wanted to relax.

She said that our team was very energetic and had a great time with us.

After catching up with them, the landlady was a local and familiar with them.

She said the river was very fun and wanted to take us to experience it.

We went with her without hesitation.

The first is to cross the suspension bridge.

The landlady is shaking hard and getting better and better.

The elder martial brother is shouting hard there.

After crossing the bridge, we have to pass through a primeval forest.

The stones are covered with moss and there are almost no roads.

The landlady said how lucky the forest is.

I didn’t meet any snakes today.

After going down the mountain, I came to the river.

I took off my shoes and socks at the first time and went barefoot to experience the clear river and beautiful stones in Shennongjia.

The water is really cool! If it doesn’t flow, it must freeze.

After playing for a while, he continued on his way.

Because the weather was too hot and some family members didn’t exercise much at home, elder martial brother asked them to take the security car back one after another.

It’s rare to come once and see where your limit is! As a result, we didn’t arrive at Muyu town until three o’clock.

The weight is too big.

I can’t finish it.

There are about half left.

For a moment, I feel that our self-cultivation and family are warmer.

We gather together from all over the world.

And the bowl of wine on the first day, senior brother Zhiyuan began to eat it one by one.

Yesterday, at the top of Zhaojun Wangxiang mountain, there was only one tofu flower, which was also divided by senior brother Lingling and senior brother Jane.

There was no so-called hygiene and saliva.

We just wanted to treat the most sincere people with the most real heart.

After eating noodles, I began to climb the slope from the foot of the mountain in Muyu town to the place where I stayed.

It was about eight kilometers.

I originally planned to reach the top of the mountain in an hour.

As a result, I came up in 45 minutes and didn’t stop halfway.

This is the power of concentration.

In the evening, continue to study the Sutra of four reading places.

Each family takes turns to read one page, and those who read it quietly have to give red envelopes.

I think the intention of elder martial brother is: first, let us learn more good knowledge and keep mindfulness.

The second is to exercise the courage and eloquence of family members, because some family members really close themselves too much and only care about everything.

They are unwilling to share and communicate, and they are tired.

After learning, senior brother, let each of us share the knot in our heart and open it with the power of the whole mindfulness magnetic field.

If you want to know, your family can send me a big red envelope.

Although the heart knot between elder martial brother bodhi tree and elder sister Xue has already been opened, they still cry when sharing.

I’m so happy for them! As elder martial brother Bodhisattva said, if you can’t open your heart knot, it will show up in your body over time, and finally cancer.

I want to make a wish in front of the Bodhisattva.

I hope that people all over the world will not have heart knot and live a happy, healthy and happy life every day! On the fifth day, I was tired two days ago, and two articles were left in the log.

and the train waiting for home at Yichang East Railway Station doesn’t leave until 11:30.

There’s no place to go.

Just fill in the log of the previous two days! On the fifth day of riding, start from qingtianpao to Hongping town.

Before departure, sister Xue and our accommodation boss are going to have a climbing competition.

The boss is very nice.

He likes drinking and playing cards.

We all hope that the boss can develop the good habit of exercising.

We have to come from all over the world.

He has such good scenery and roads at the door of his house.

Therefore, senior brother Zhiyuan said that if Lao ban climbs the slope to the top of the mountain before sister Xue, he will be given a big red envelope! They started first and I didn’t start until five minutes later.

In order to witness their wonderful game, I put my sleep, breathing and concentration behind me and chased them with brute force.

Halfway up the mountain, they caught up with them, and the two were always on the same level.

The boss has a strong explosive force.

When he sees that he is behind, he uses brute force to kick a few times.

After kicking, he gasps for breath there. 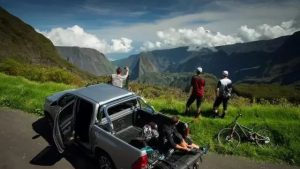 Cycling is the most fashionable and healthy lifestyle 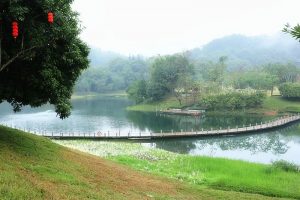