What has changed in the past and in the future is time.

What remains unchanged is the vision of peace.

I will guard you from the past.

I wish you peace and happiness all the time.

Huang Feihong, 13th Aunt Li Xiaolong, ye Wen Through time and space just to protect you! Many celebrities in Foshan speak for the safe riding of electric bicycles! Huang Feihong and aunt 13: Romance cannot be “overloaded”.

The price of life is higher.

Electric bicycles can only carry one child less than 1.2 meters.

According to the regulations of Foshan Municipality on the administration of electric bicycles, it is forbidden to carry people on urban roads, but if fixed safety seats are installed, they can carry one child less than 1.2 meters tall on roads outside urban areas, It is forbidden to carry more than one person.

Bruce Lee: no matter how high martial arts are, the head is the most important.

When riding an electric bicycle, the head is most likely to be injured in an accident! In short, remember to wear helmets.

Wearing safety helmets correctly can effectively reduce the risk of death of riders.

Relevant research shows that wearing safety helmets correctly can reduce the risk of death in traffic accidents by 60% ~ 70%.

Bruce Lee: if you obey the rules and etiquette, you have to always “punch” retrograde “kick” through the red light to practice martial arts.

The riding vehicle is not retrograde and stops at the red light; Abiding by laws and regulations, knowing etiquette and giving way are the most important for safe travel.

IP MAN: it’s safe to go your own way.

If you want to practice real Kung Fu, you must first learn its “way”.

On roads without non motorized lanes, they should be driven on the right side of the roadway.

Continue to carry out the rectification action of “motorcycle electricity”.

Finally, the traffic police reminded everyone to wear helmets when riding electric bicycles.

Keep to the right. 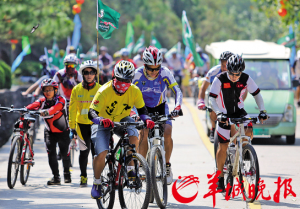