What kind of sparks will come when you encounter mountain cross-country in the ecological forest in the countryside in autumn? In the morning of today (September 25), the 2022HEROS Series and the unveiling of Jiabei Rural Park PARKCYCLING kicked off at Jiabei Rural Park.

After a long absence of more than half a year, more than 100 cycling enthusiasts once again met in the wild autumn and followed the wind.

“Ready, go!” With the sound of starting, the young players in professional equipment turned into runaway wild horses and galloped out of the starting point.

The most difficult part of the 4.75km long track is the wave track.

The cute children not only have to change their direction and cross the winding rocky road, but also have to cross one gully after another, and they will turn over when they are not careful.

“It’s as difficult as falling into a swamp.” Wang Xichen, the contestant, said, “But I will not give up.

I will persist in riding until the end.” On the track, the young riders became more and more brave as they fell down; Along the track, the parents’ cheering voice became louder and louder.

Some of them sent out their families to do cheerleading, and some of them ran all the way to the end with their children.

“I feel more excited than a child.

My child is only 6 years old.

It’s the first time for him to participate in such a competition.

As a parent, he especially wants to know how he views this competition.” Mr.

Huang, the parent, said, “It’s very good to take a proper risk, so that he can grow up.

It’s not a big problem if he falls down or stumbles.” It is reported that the track, as the only original forest mountain bike track in Shanghai, is built by the PARKCYCLING base of Jiabei Country Park.

This year, the track will be upgraded again.

Based on the original environment of the ecological forest, there will be three levels of difficulty, high school and low school, suitable for adults, teenagers, children and other different types of cycling enthusiasts.

It is surrounded by trees and has a strong sense of wild interest.

Activities such as tent market for second-hand bicycle supplies were also held on the site to enrich the amusement experience of cyclists.

In recent years, relying on the 8-year HEROS bicycle culture brand accumulation of Hongjing Sports under Oasis Investment Holding Group and the bicycle riding culture foundation of ParkCycling Town, more and more young people who love sports and cycling participate in the competition.

“Our Parkcycling Town has comprehensively upgraded its hardware facilities in all aspects, including the track conditions, supporting facilities, etc., and has also joined the Pet Friendly Zone.

While training excellent young sports talents, we also expect more citizens to bring their children and pets to enjoy the time in the countryside.” Parkcycling town staff said. 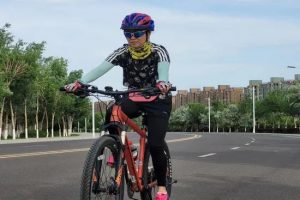 Riding: It is not only an active recovery method after horse running, but also a good aerobic fat burning exercise