What kind of horizon is worthy of wandering all the way [cycling around Hainan Island (Part 1)] the first day of the west line: December 24 Haikou Lingao County 100km the second day: December 25 Lingao Haihua Island 100km the third day: December 26 Haihua island 103km to the east the fourth day: December 27 East jiaotoulingzi 111km the fifth day: December 28 jiaotoulingzi Sanya 72km [cycling around Hainan Island (Part 2)] the sixth day of the eastern route: December 29, Sanya – Xincun 70km; the seventh day: December 30, Xincun – Xinglong 53km; the eighth day: December 31, Xinglong – Boao 90km; the ninth day: January 01, Boao – Wenchang 75KM; the tenth day: January 02, Wenchang – Haikou 90km – we will grow old if we don’t fight with swords – at this time a year ago, My farthest record of cycling has not exceeded 2km! During the epidemic period, in order to see the distant scenery in the film, I turned to a Taiwanese film “Etude” a few years ago, telling a young man with hearing impairment Mingxiang, carrying a guitar and backpack he didn’t know how to play, and spent a week cycling around Taiwan. 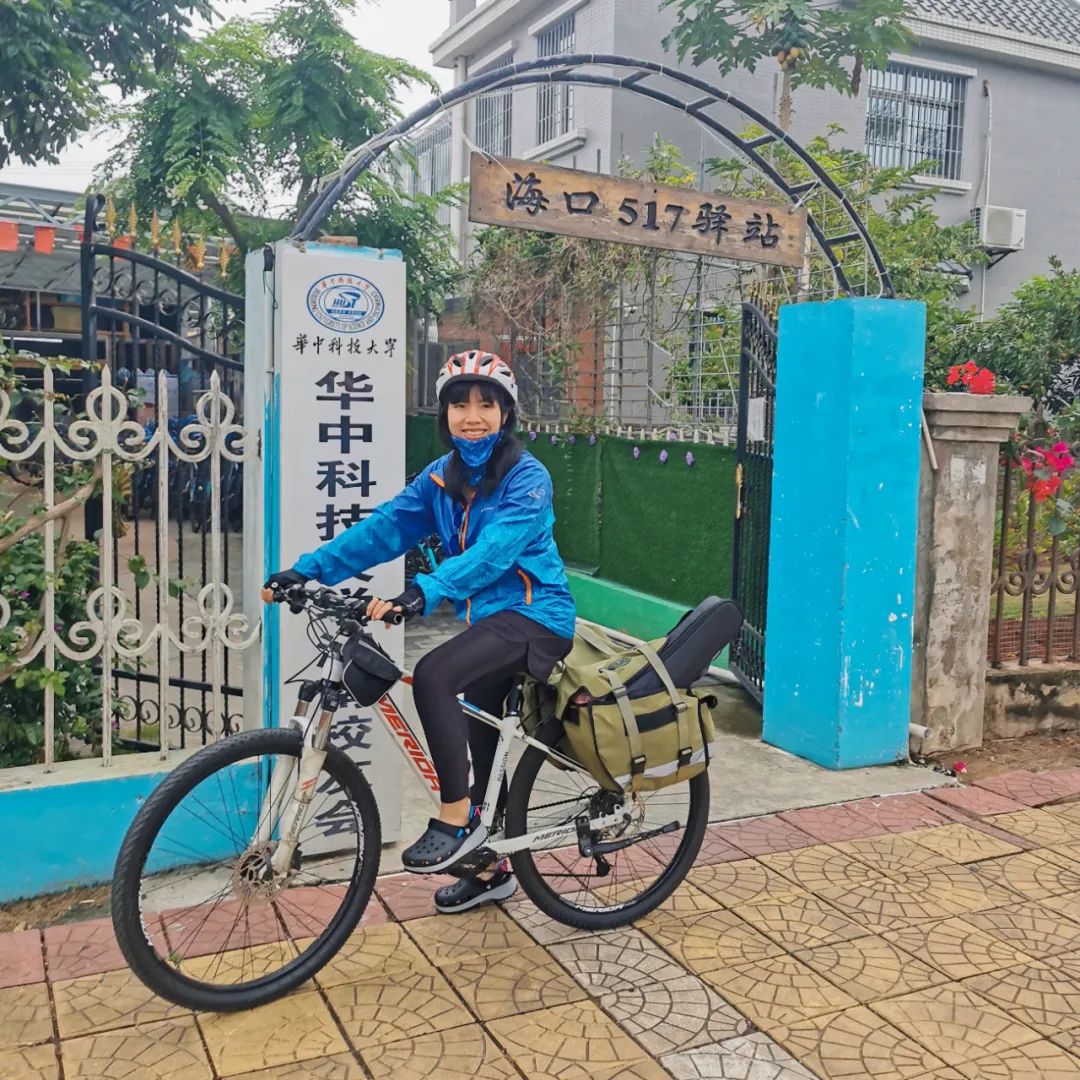 Someone asked him the meaning of circling the island, and he replied, “if you don’t do something now, you won’t do it all your life.”. 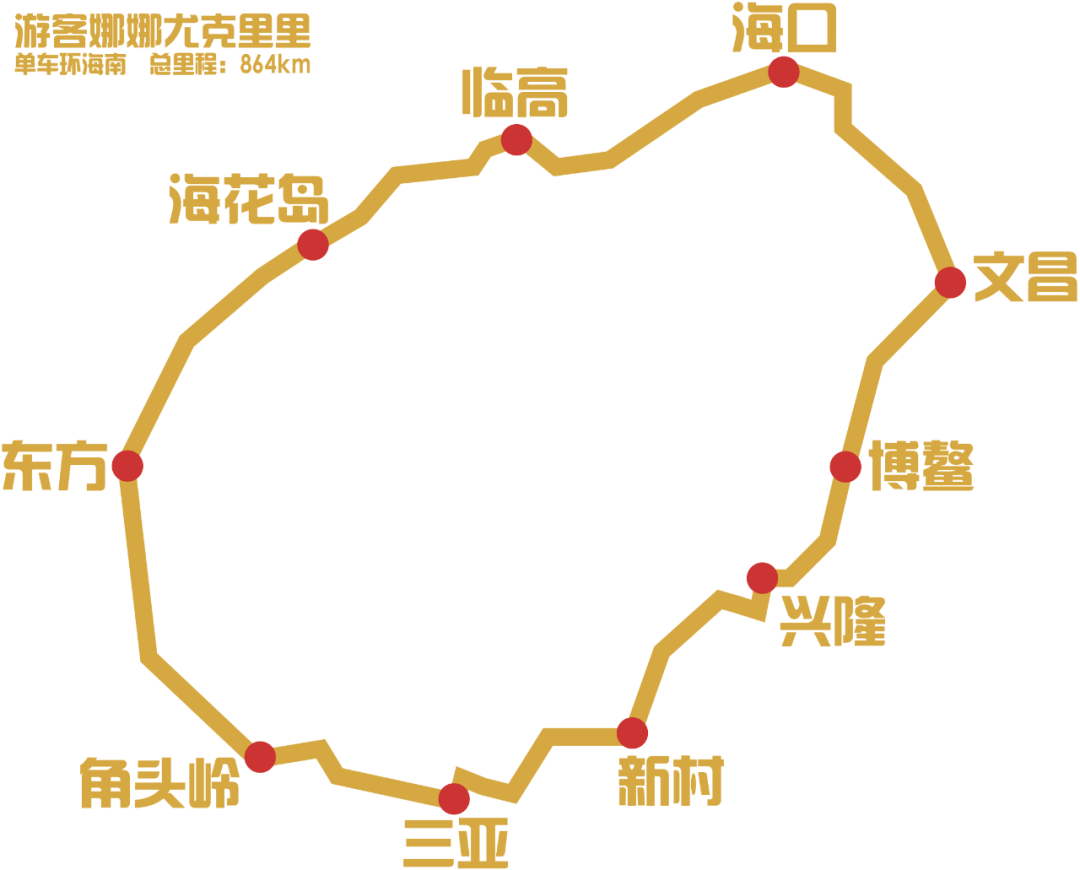 This is the driving force for me to start my ride around Hainan with ukri. 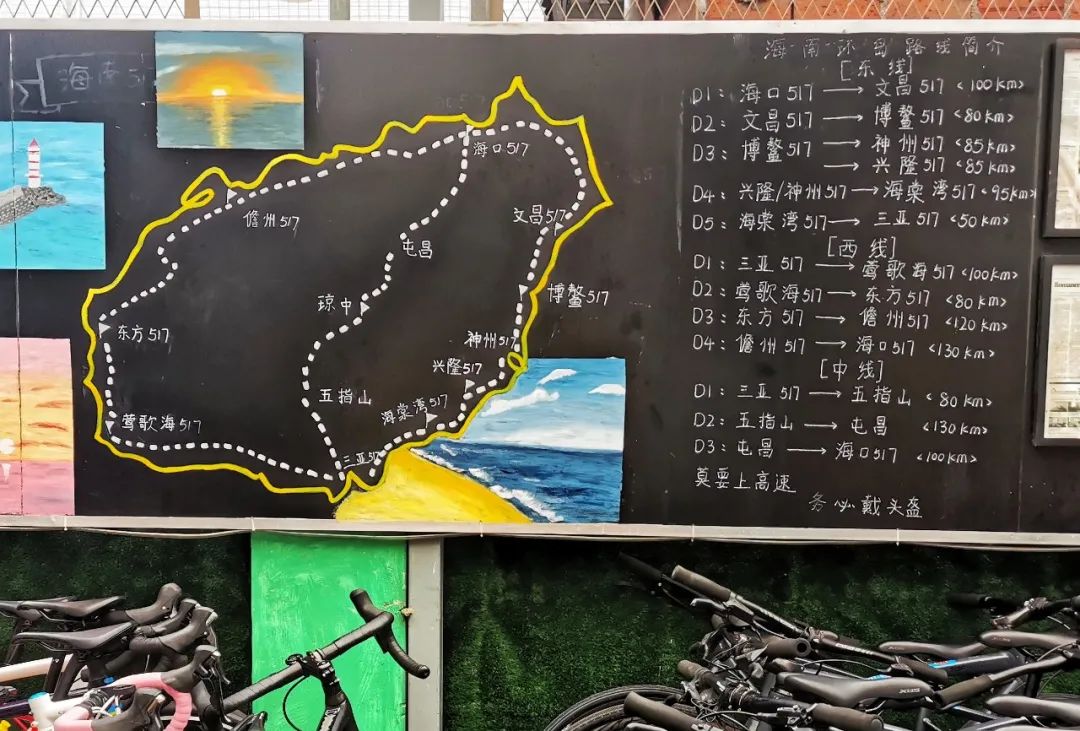 After all, we will grow old if we don’t travel around the world with a sword. 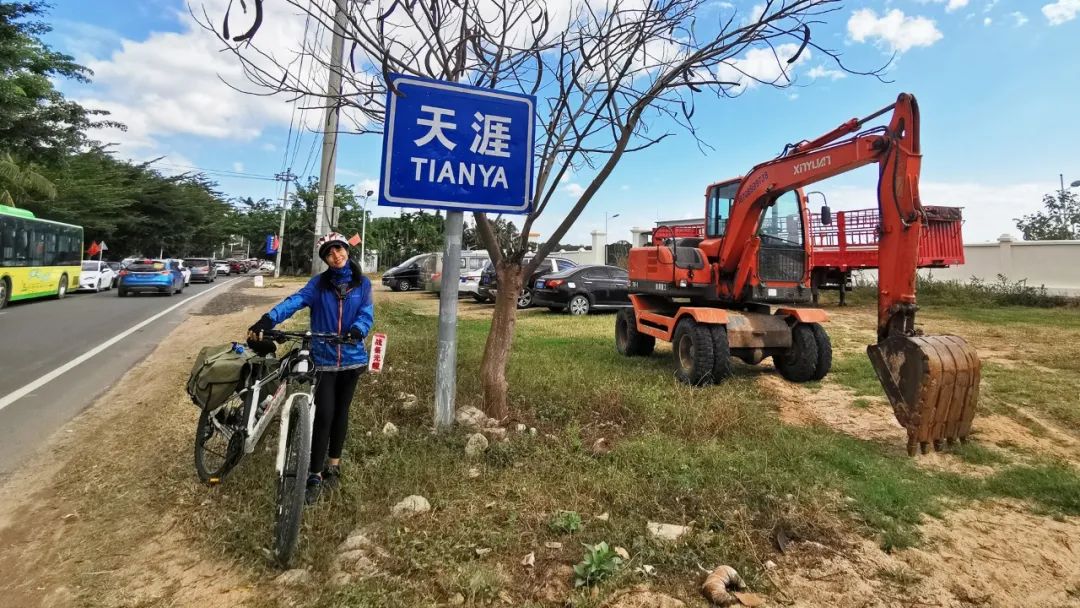 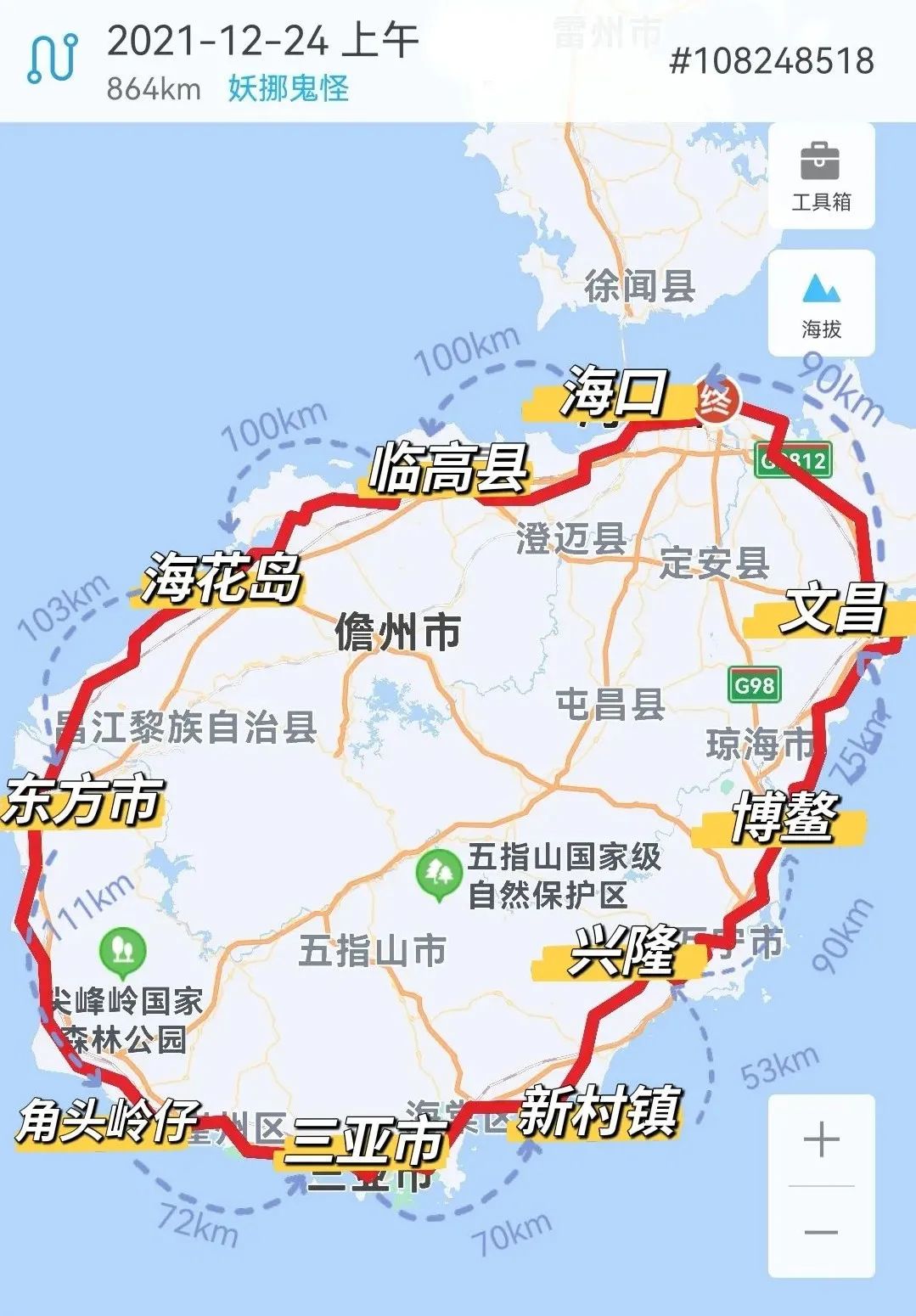 You can also go around Hainan. 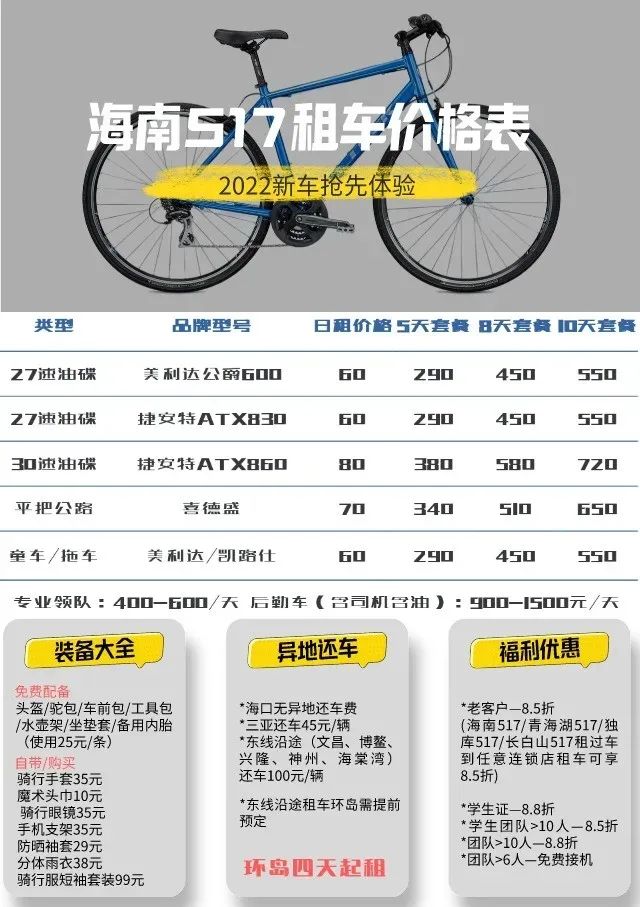 How bold people are and how productive the land is. 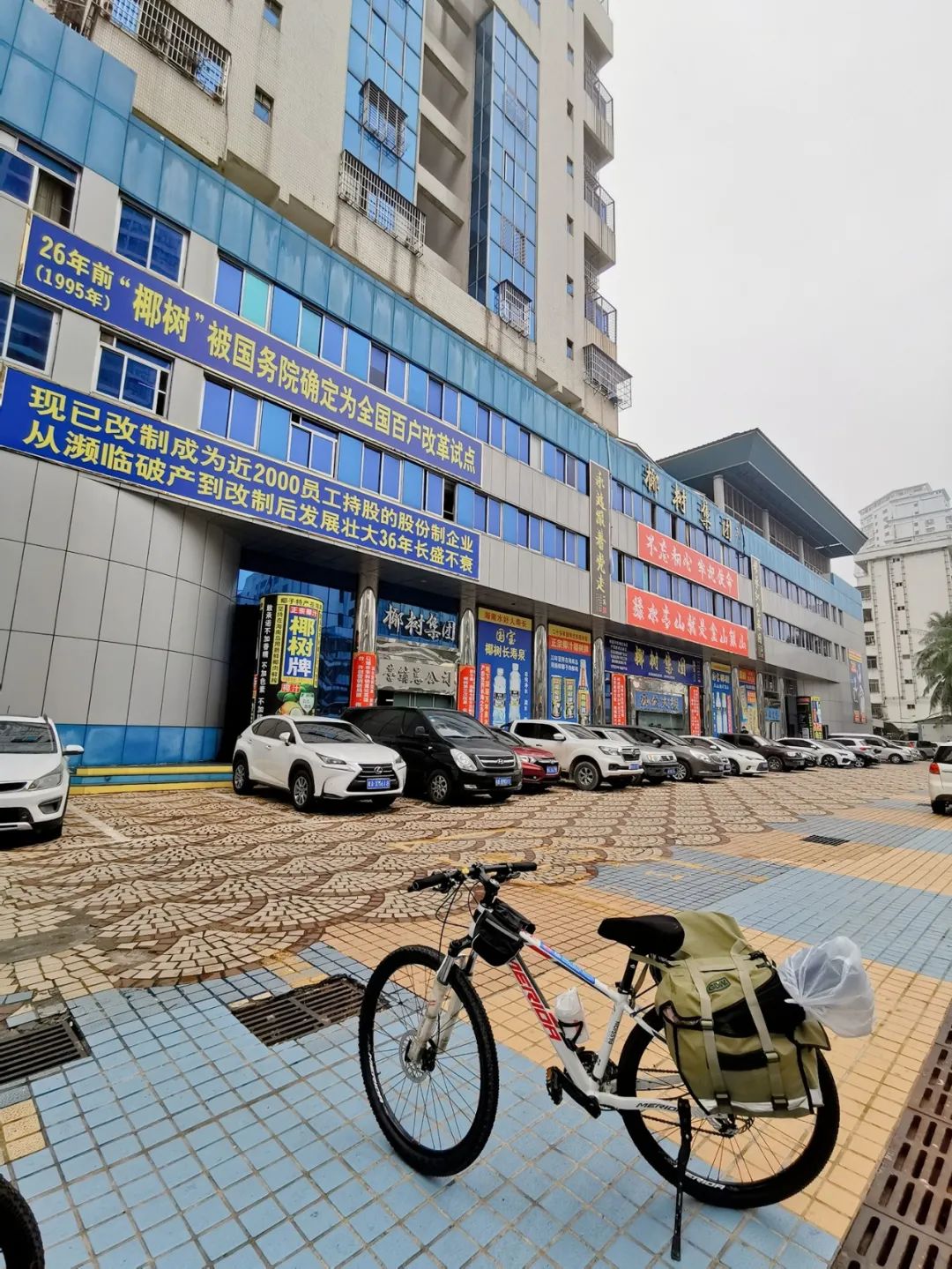 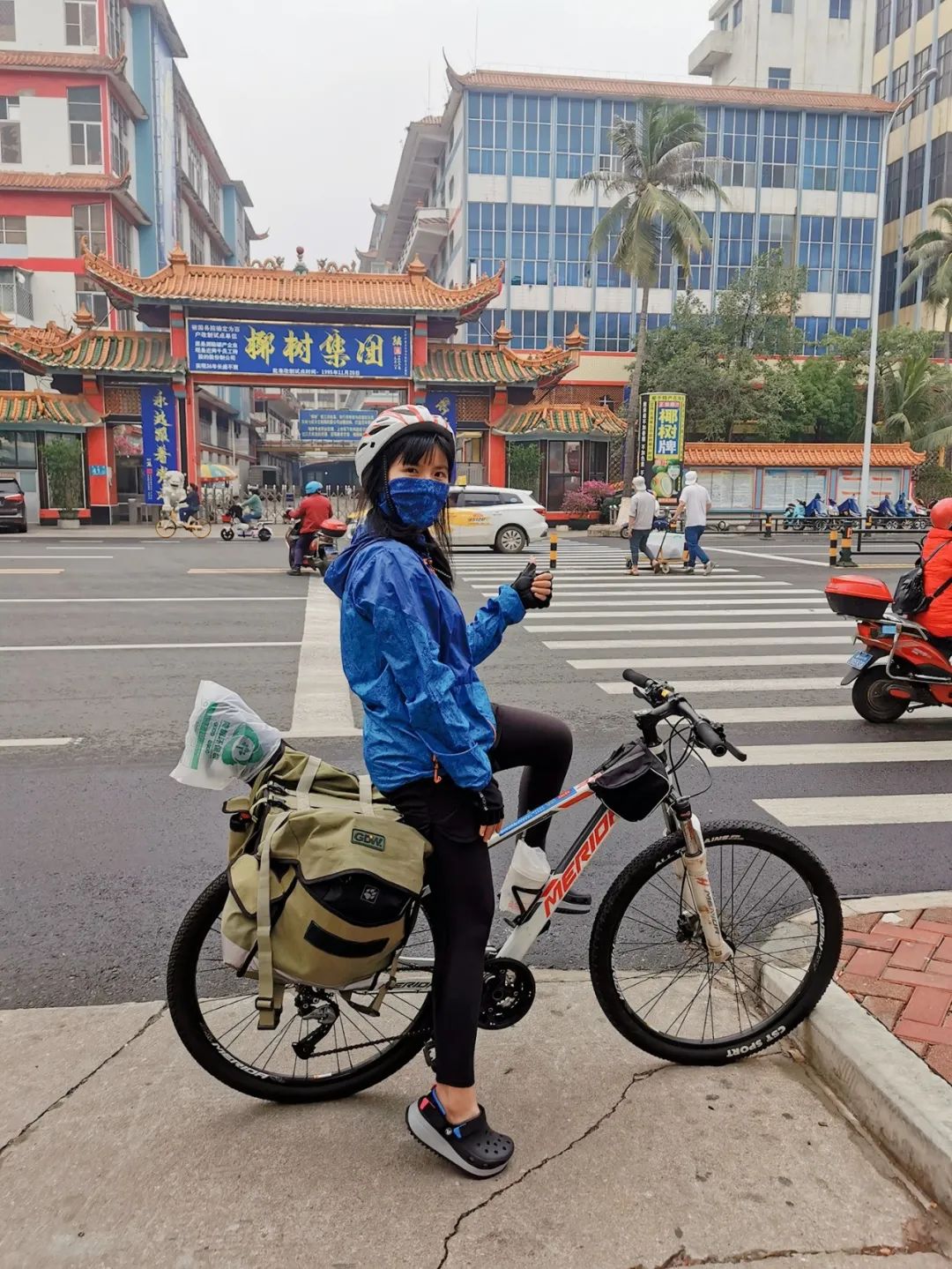 After work last night, I went straight to the airport and flew from Nanning to Haikou for one night.

At about 9:30, I finished the car rental formalities and the Round Island trip officially started.

▲ 517 cycling post station 2022 latest car rental price ▲ for details, you can scan the QR code in the lower right corner of the right figure ▲ MSIR, who rode around the island alone last year, felt that his cycling route was not round enough, so he fought with me again this year.

His route last year was to ride along the national highway according to the points set up by 517 post stations in various parts of Hainan, namely: Haikou Danzhou Dongfang Yinggehai Sanya Haitang Bay Xinglong Boao Wenchang Haikou jiuri ring island.

There are 517 post stations for accommodation at each point.

▲ 517 route of the great God around the island ▲ on the first day, it will kill me to ride 140km from Haikou to Danzhou, and the route is not round, so this journey, I will take the township road to Lingao along the coast.

As long as it is 100km, I will try my physical strength first, and then decide where to go next.

Starting from the rental point, I rode all the way to the West.

The urban area was bustling.

All kinds of cars suddenly plunged into the non motorized lane, or turning cars did not allow straight bicycles, all kinds of retrograde motorcycles competed for the road, or pedestrians did not see the road for some reason and crowded in front of my bike.

There were continuous traffic lights such as uphill and downhill.

I rode on the urban road 20km before the start.

I was very unhappy, Even a little upset, can the traffic be more orderly?! The boring cycling in the urban area was only excited when I saw the coconut tree group, a leader in the design industry.

Buildings such as beverage packaging and color matching were so bold that I wanted to clap my hands.

▲ pay a visit to the coconut tree, the leader in the packaging design industry, and linger to the Haiyu (West) line in Xiuying District, Haikou at about 12:30 noon.

MSIR said that the west line around the island generally refers to this road: National Highway g225, starting from Haikou City and ending at Yulin port, Sanya City, with a total length of 429km.

As there are many big cars passing by, some parts of the road are full of smoke and dust, and the experience is not very good.

▲ these are relatively clean roads.

In order to charge the mobile phone, we also want to have a rest.

We casually found a tea shop on the roadside to drink dad’s tea.

Hainan dad tea refers not to a certain variety, but to a form, namely popular tea.

There are black tea, green tea, flower tea and all kinds of local tea.

The elderly or workers or neighbors go to the store to order a cup or a pot of tea to chat, relieve boredom and pastime.

The store adds more than half a cup of sugar at the bottom of the pot (cup).

If you want to drink sweet, stir it.

If you don’t want to be too sweet, don’t stir it.

After drinking more than half of the cup, add tea.

The sweetness of the sugar at the bottom of the pot (cup) continues to penetrate, and you can drink it again for a long time.

Hainan dad tea ▲ wearing slippers can better integrate into the tea party of local people, but we have only advanced 26km at this time, so we shouldn’t stay long.

Hurry up and start.

After sitting for half an hour, the muscles of my legs and buttocks relaxed quietly.

I sat on the bicycle cushion again.

Oh, it was so sour that I cried out in pain.

After a while, your muscles will forget the pain.

After enduring the first 5 minutes, I really didn’t feel so painful, but my thighs began to feel pressure.. 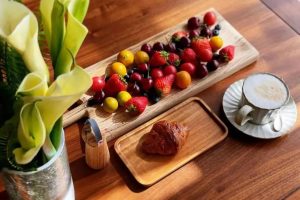