In sports injuries, the most common phenomenon – cramps.

What exactly is a cramp? Cramp is actually a muscle spasm, which refers to the phenomenon that the muscles in a certain part of the body contract involuntarily and cannot relax quickly.

In addition, cramps can occur in small muscles including feet, fingers, arms, abdomen and even between ribs.

When cramping, the whole muscle will become hard, and sometimes you can even see muscle twitching under the skin.

The muscle spasm may disappear after a few seconds, or it may last more than 15 minutes.

If it is not handled in time or the original movement is interrupted, it may occur again and again in a short time.

The real cause of cramps during exercise has not been determined so far, but it is generally believed that it is caused by the interaction of many factors.

The phenomenon and causes of cramps: 1.

Lack of sufficient stretching before exercise; 2.

Muscle fatigue due to overuse; 3.

Exercise in a too hot climate; 4.

Treatment of cramps during riding: 1.

Go to a cool and ventilated place and replenish water, especially sports drinks; 3.

In the process of treatment, it can be supplemented by hyperthermia or cold therapy.

Whether it’s sports spray or cold and hot compress bag, it has a good effect.

During the “warm-up exercise” and “exercise after exercise” before riding to prevent cramps, strengthen the action of “stretching”.

During exercise, while replenishing water, it can replenish sodium (salt) and electrolytic water to balance potassium and sodium in the body.

(eating fruit with salt not only tastes better, but also balances potassium.) Appropriate and gradual movement.

Cramps are the body’s warning that the current amount of exercise has exceeded our ability.

In other words, we don’t exercise enough at ordinary times, so we have to practice more.

In case of cramp during cycling, in addition to the above emergency treatment, there should be at least a few days of hot compress and massage after going home, and push away the salt of hexidine to dilute it, otherwise the cramp will be easy to recur.

Gear ratio: gear ratio < heavy > is also one of the causes of cramps.

In the area of climbing < steep slope > or < top bump >, the selection of light gear ratio has more unexpected advantages.

As long as you are not in a hurry, you will gradually realize the benefits of gear ratio < light >.

Improper riding posture: the seat cushion is too low, too front or too rear, which will form a burden on the knees or muscles.

There have been cases of rupture of the cross bremsstrahlung in the knee. 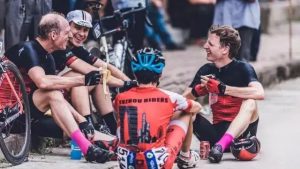 See if you are suitable for cycling?